Whitey and the Seal People 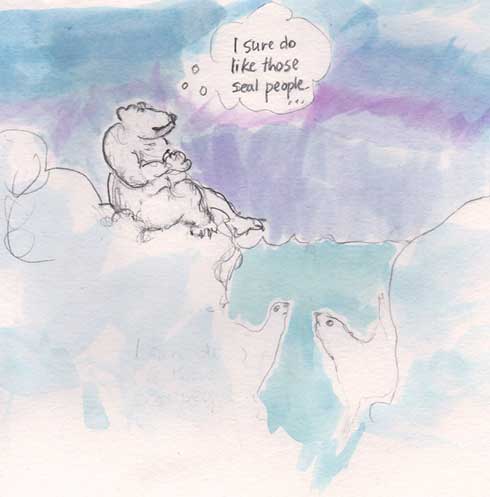 Happy New Year, everyone! Here’s a little story that I haven’t published elsewhere. I made it up with my sister who loves polar bears. She was quite alarmed by the idea that one species has to eat another species to survive, so this was a way to talk about the special relationship between the animals “on top” and the ones underneath. I did the drawing in a little fit of inspiration that followed writing the story.

Whitey and the Seal People

Once upon a time there was a young polar bear cub named Whitey. She was the daughter of a mother bear named Star. The bears called her Star because she had a black starry patch on her chest, right over her heart.

Whitey was a playful cub, but she was also quite mischievous. She liked to play tricks on her mother. She would disappear down a water hole and then mother would have to go looking for her. “Whitey?” she would call. “Whitey? Oh darn, where did she get to now? Whitey, Whitey!”

Whitey liked that game a lot.

One day, when Whitey was playing hide and seek, she dove under the ice and swam a long way. She thought it would be fun to find another water hole and climb up onto the ice. Her mother would never be able to find her up on the surface! When she came swimming by, Whitey would stick her head down the water hole and say, “Ha ha! Here I am, Mama! Aren’t I the cleverest bear EVER?”

Whitey swam a long way under the ice but she couldn’t find a water hole. Soon she started running out of breath. Polar bears can only hold their breath for about six or seven minutes and then they have to go up for air. Whitey turned around to go back, but she couldn’t find the water hole that she came from. Oh no!! She panicked. She didn’t know what to do next.

Just then, a seal pup came swimming along. He wanted to know what all the commotion was about. When he saw the polar bear, he yelped in terror. Polar bears EAT seals!

“Please don’t be afraid!” Whitey cried. “Help me! I don’t have any air left! Please please please show me a way out!”

“You’re going in the wrong direction,” barked the seal pup. “It’s all dark in that direction, don’t you see?”

Whitey calmed down and looked around. The seal was right. There was no way she could find a water hole under the dark ice ahead of her. The ceiling of ice was black, but beyond, it was bluish where the light was coming through.

Whitey swam meekly after the seal, and you never saw anything like it — a polar bear getting help from a seal!

When they came to the water hole, the seal pup’s mother saw that her baby had a polar bear on his tail. She rushed in and swiped at her pup to make him come away. “What are you doing?” she roared. By that time, Whitey had seen the hole. She thanked the pup and pulled herself back up on the ice, after which she breathed the biggest sigh of relief you have ever heard. Ahhhhhhh!

Whitey never played hide and seek after that. She concentrated on learning to hunt seals with all the other grown-up polar bears. But seals weren’t just food for Whitey. The seal people had saved her life. In fact, polar bears wouldn’t be able to exist without the seal people.

That gave her a lot to think about!