Unscrewing the Screw Up 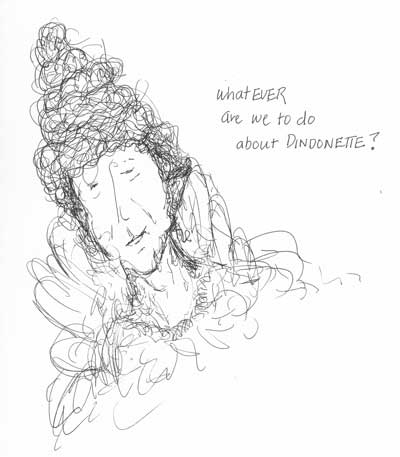 I am afraid I am getting too frail for big speeches, for I am not well, my dears, not well at all. At any rate, I will do my best to tell you how we dealt with the matter of Dindonette’s mess.

We knew nothing about what had happened until a little while ago….

My doctors had ordered me to take several tours around the earth a couple of times a week, to get a change of air, and so, on the day in question … oh, dear, this is going to be a long speech and I don’t know how I will possibly get through it all!

I never like to travel alone, and so on this particular occasion, I took my godson with me, Cornichon. He was fourteen, and very attached to his friend, Toupette. Her guardian is the wizard Kristopo, who had allowed her to stay with us for a little while.

Now where was I?

Oh, yes. The trip. I picked the children up in my little airship. It is very fast and can zip around the earth in just under, oh, seven hours. We were going along over the ocean when I noticed an island I hadn’t seen before. I thought we might land and explore it.

The island was tiny enough to explore on foot, and so I left my dragon in the hold. We went down the little path and came into a village. There was nobody there. The town was completely desolate.

What had happened? I resolved to use my magic arts to find out, while the two young people wandered off.

Now, my dears, I am not at liberty to tell you the means by which I discovered what had happened. Suffice to say that when I did, I made haste to find Cornichon and his friend.

By this time, they had come to the fountain and were having a nice long drink of the cool water.

“Stop drinking at once!” I cried. “The water is poisoned!”

“How can that be?” said Toupette. “I have never tasted such sweet water, don’t you think, Cornichon?”

“What does it matter what you think now, unhappy children? I am too late! Why did you go wandering off? The fountain has been enchanted! And that means that very shortly you are going to pass into extreme old age. You will become withered and weak, and I can do nothing about it. One fairy cannot reverse the work of another. All I can do is make your death as easy as possible. Something palliative … I suppose … I’ll need to make sure that you don’t suffer…. ”

I was weeping, but the children were most certainly not. No, indeed, they were watching one another change with joy and amazement. Cornichon was filling out into a fine young man, and Toupette was becoming a ravishing, curvaceous beauty.

“If we are to grow old, then let’s make haste and marry now!” Cornichon declared.

“Oh, yes, let’s do!” cried Toupette. “Why anticipate decay when we can anticipate happiness!”

I threw up my hands. “Fine,” I said. “But you’ll not marry in this dreadful place.” I hurried them back to the ship and we made the five hundred mile trip back to Bagota in less than an hour.

Soon after we returned, Kristopo came to check on his godchild. You can imagine his amazement when he saw the ravishing Toupette. He fell in love with her right away, and came to me to demand her hand in marriage.

Of course I would not even listen to his petition. He was terribly offended. Who in their right mind would refuse the most powerful wizard in the land? All I could say was, “Look Kristopo, believe me when I tell you that it is in your own best interests to look elsewhere for a bride.”

He left my room, but no sooner had he gone out the door than he burst into Toupette’s room, grabbed her, and flew off with her through the window. He put her in a tower in his own palace, where he kept her imprisoned in a pretty, but locked room.

I was furious, of course, and I sent my forces to confront him. That was a very serious thing to do, for our two domains have lived in peace for a long time, and we have established a balance between the wizards and the fairies. Our peace is based on an agreement that neither side will ever use force, or any form of black magic against the other. Kristopo had breached our agreement in his passion to possess Toupette.

A few days after he had taken her, Kristopo went to visit his beautiful prisoner. Much to his shock, while she was still attractive, she looked quite faded, and indeed, had advanced well into middle age. He thought that I had played some sort of trick on him, and in a fury, he rallied his forces against mine. On the brink of war, which would have had unfortunate implications for both our kingdoms and all those we guard, I sent my ambassador to appeal for peace. I insisted that I had nothing whatsoever to do with the change that had come over Toupette.

I might have saved myself the trouble, for Toupette continued to age, and soon Kristopo sent her back to us. He can quite lost his fascination for the old woman who now hid herself under a veil. Cornichon rushed out to greet her, and stumbled, for he had become quite dim-sighted. He reached for her and the two embraced with an intensity that can only be made by absence and swiftly passing time. Toupette sobbed, “How can you love someone plain and wrinkled as me?” 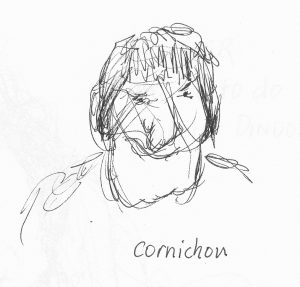 Cornichon lifted her veil and kissed her tenderly on all the parts of her face. “I will always love you, my darling Toupette,” he said. “Nothing in the world will ever change that.”

A wedding, however, was out of the question. Toupette fled to her apartment and begged me not to allow either herself or Cornichon to be seen.

Precious days passed, and then Kristopo came to my palace. Toupette would not come out of her apartment, and hid herself in the darkest corner of the room. Cornichon, forgetting his age, ran to meet the wizard, and in so doing, tripped and fell, and bruised one of his eyes badly. Looking on from a window, Toupette hastened to the courtyard, but she could hardly stand on her feeble legs, and fell on top of Cornichon. She landed on his forehead and knocked out three of her loosened teeth!

I could not bear to witness such infirmity. Tears spilled from my eyes as I helped Toupette to get to her feet. In that moment, Kristopo saw for certain that I had not performed any tricks. As we came into the hall, he insisted that I tell him what happened, so I told him about how Dindonette had enchanted the fountain.

We decided to summon an assembly of fairies and wizards. Together we would discuss the matter of what to about the mess made by Dindonette.

We could not reverse the magic spell. However, Dindonette had the power to undo half of it. The question was, who would we spare? Cornichon or Toupette? 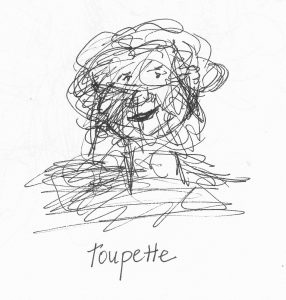 Neither myself nor Kristopo could make a choice, for we favored both equally, which is why we had lived in peace for so long. So we asked the fairies and the wizards. Who do you favor?

A loud argument broke out. Not surprisingly, when you consider it, the wizards favored Toupette, and the fairies wanted to spare Cornichon. They were equally matched, and it became clear that only the lovers could decide their fate. We summoned them, and the two little old people hobbled in with their canes.

We gave them the choice, and they both considered it for a moment. Then Cornichon turned to Dindonette, and he said: “Ah, my love, I will always value the beauty of your mind over your body. Though the most beautiful women of the court may fall victim to my charms, I will continue to pay homage to your age and wrinkles.”

“Not so fast!” said Toupette. “I don’t see why you should have your youth. Why would you heap all those humiliations on me? I will trust to the justice of the fairy. She will not treat me so unkindly.”

They both hobbled off to their rooms, disgusted with one another.

There was nothing left to do but call Dindonette and let her decide. She can tell you the rest of the story. I am quite out of breath!