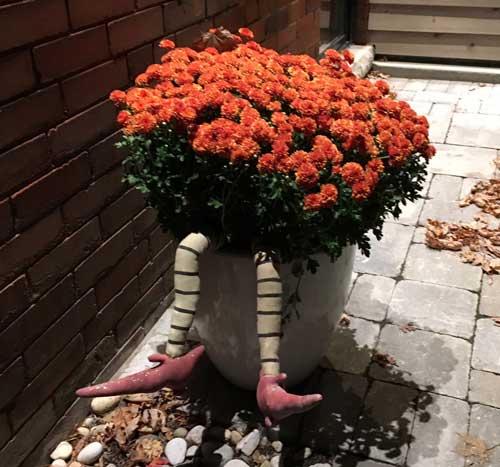 Every year, it seems, adults are making a bigger and bigger deal about Hallowe’en. Grown men and women are constructing elaborate graveyards in their front yards. They lie in coffins and hunch over smoking dry-ice cauldrons dressed like Victorian corpses come to life. Everybody’s having a lot of fun with fright, and maybe that’s all well and good, but I’m not sure I like the idea of adults dressing up as zombies and doling out candy to kids. They make my skin crawl, and it’s not just about the sugar.

At the tender age of seven, I met a real life zombie. He was a school janitor who lured little girls into his closet with mint candies. I was confused by the actions of this old man with his scruffy face and his clothing that smelled like cigar smoke and sweat. He stood at his door and offered me a handful of green scotch mints. Sort of like Hallowe’en…. Only he wanted little girls to do a weird ‘trick.’ He wanted them to sit on his knee so he could fondle them.

I don’t like handing candy out to kids, and I thought people were over asking children to do ‘tricks’ when they come to the door, but last night while my husband and I were walking through the neighborhood, I heard a little boy tell his friends, “I had perform for them!” And I was truly creeped out.

What is Hallowe’en anyway? As you may know, Hallowe’en is a contraction of All Hallows’ Evening. In the Catholic tradition it began the three day observance of Allhallowtide, during which we are meant to remember the dead, the saints (hallows) and all the faithful departed. It is believed to be derived from the Celtic festival Samhain, (pronounced SAH-win or SOW-in), a four-day celebration of “summer’s end.” It marks a liminal time between the dark and light phases of the year.

At these times, the veil between this world and the otherworld is believed to thin. Spirits can more easily come and go. Traditionally, prayers were offered, a place at the table were set for departed friends, people played games and made divinations. From the sixteenth century onward, the festival included people going from house to house in costume, and reciting verses in exchange for food.

Hallowe’en has grown into a huge industry now, and some streets in the west end of Toronto are so ‘tricked out’ with graveyards and haunted houses that children from all over the city troop in with their plastic pumpkins and candy bags. Our neighborhood has gone quite ‘pagan’ as well, and every year we walk through the streets gawking at the open coffins, the huge moving spiders and the adult zombies standing in their steamy front yard cemeteries and drinking beer with their neighbors.

This year one guy was sitting in his front yard wearing a white mask. The entrance to his house had been fully covered in black and grey, and the “haunted house” door had no handle. I said to my husband, “Would you let your children go in there?” The little ones who came to his house stood back and only the bravest approached. I saw nobody go in through the door. 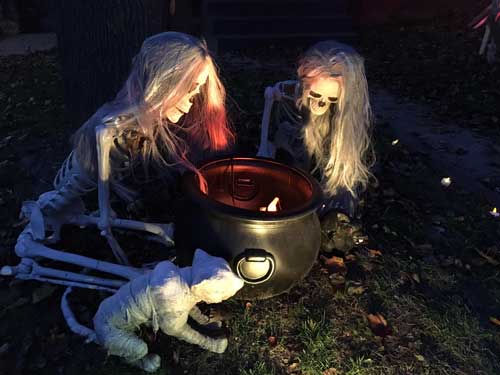 We have the idea that Hallowe’en is for very young children, and that once you become too cool for costumes you shouldn’t go out. Lately, however Hallowe’en has been getting appropriated by adults who, in my view, are taking way too much glee frightening the innocents.

My sister is an innocent and she hates Hallowe’en. She likes to dress up for the party at her day program, (this year she’s wearing a leopard costume), but that cat won’t be prowling the neighborhood on Hallowe’en night, and she’ll be hiding in the back room when the “trick or treaters” come to the door. Inevitably, during the Hallowe’en season, she and I have our phone conversation about death. She’ll open it by saying: “I don’t like those creepy skeletons and spiders.”

“Yes but I don’t like them. Mom died and Dad died and that makes me sad.”

“Well you know that people are just acting out what is going on in the earth right now.”

“Yes but those skeletons creep me out.”

“The trees. Their leaves fall down and leave just the bones, right?”

“I know you don’t. But what do you think will happen to the trees after they go to sleep?”

“The snow will fall on them.”

“Right. Then what happens?”

“The leaves come out again?”

“Yes. The trees die and then they come back to life in the spring.”

“And those spiders creep me out….”

A lot of demons swirl around Hallowe’en and I haven’t even started on the demon of sugar. Every year, my mother fought that trickster. One year when we came home after a night’s worth of healthy competition for the heaviest pillow case, Mom made us dump the contents on the living room floor. She declared that she would take all of our earnings and dole the candy out over the course of the year. That had several results. It created a ‘black market’ as we each stole our prized candy and hid it under our beds. It also caused Hallowe’en to lose its gleam, along with the appeal of any communist ideology.

I honestly don’t know what to think about Hallowe’en anymore. At the very least we need to keep our eyes wide open as we cross this demon-infested threshold. I suspect we’re getting more tricked than treated. I like the way my niece was thinking the year she dressed up as a VISA card.

When people asked her, “Who are you?” she replied: “I’m what’s wrong with this economy!”
Smart cookie.