Tribute to My Grandfather 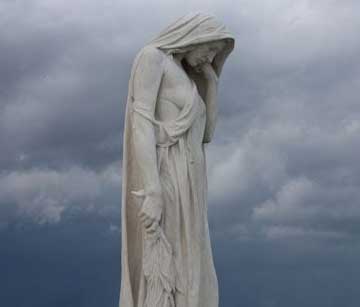 When I was hardly out of childhood, I wrote this poem to my Grandfather.

Grandad, I sit at the foot of the clock
And I think of you as I contemplate
My own curfew, the day I come in
From this brutal but beautiful earth

I suppose you are gone
That you no longer haunt
The corners of Grandmother’s house
A few months after you were gone
Grandma said she felt a strange isolation
She said, a stranger peace.

Grandad, I remember you
Like a fine antique
Carved by the sensual hands
Of a seasoned artisan
Absolutely statuesque
Solid as mahogany
And wholly without speech.

Perhaps you impressed us
More than you thought
Your mystery stalks us,
One by one, the buttons from your uniform
Are disappearing from the trunk
Grandma knows they’re gone

Who were you
Who fought in the war
Went west with your wife
And then stole away a thousand times
When the fever descended,
Sealed you from her comprehension
What did you do on those long nights
In the woods without a gun?
You put your country before your life
And when the war was over it gave you
Warden’s clothes and a woody retreat

Grandad, why did you come in before you were due?
Was it that the government
Took away the cabin it had given you
And put you on a pittance wage
To do your bit to speed decay
With lassitude and indisposition?

Nobody ever talks about you.
I don’t know why.
I remember you. I remember
Your thin and gentle hands
And the way they moved when your lips did not.

There is something kinder in that memory
Some mercy in those hallowed woods
Where hags contrive
Our fragile fortunes, while they unfold
To touch us, sear us,
Waver, and die.

My grandfather was born in Aberdeen, Scotland, in 1889, the eighth of thirteen children. When he was little, he was given to his childless uncle and aunt to raise, and those were happy years. Then, when he was eleven or twelve, his father took him back, and moved the family to Canada. They had a farm in Selkirk, Manitoba, and the boy went to Winnipeg to sell newspapers on the street as a way of raising money for his family.

In 1915-16, he enlisted in the army. The men didn’t spend much time training, and were quickly shipped to Europe. In 1916, he was fighting in the trenches. My Dad told me that the men in the trenches fought one another at such close range that their superiors worried about friendships forming.

In 1917, he was buried by a shell at Vimy Ridge and was taken for dead. As the bodies were piled up, he moved a limb, and someone realized that he was alive. He was taken to hospital in France, then to England, and, finally, to Winnipeg. He was discharged in 1919, after being in hospital for nearly two years. He had internal injuries which hadn’t gone diagnosed, and he suffered chronic pain and “shell shock” for the rest of his life.

I have inherited that silence. I feel it, even now, as I write about him.

In his essay, “The Storyteller,” Walter Benjamin talks about the silence of the men who came back from the horrors of the Great War. Their stories were untellable, and with their silence, came a profound loss. “It is as if something that seemed inalienable to us, the securest among our possessions, were taken from us: the ability to exchange experiences.” While published poems and stories came out of the war, the intimate stories, the ones that pass from fathers and mothers to children, were left untold.

Most of the walking wounded buried their experience, and kept their psychological injuries to themselves in a culture that saw (and, to some extent, still sees) chronic pain and depression as signs of weakness in character.

When he came out of hospital, my grandfather went out west where he worked as a park warden. He spent fifty years working to protect the most beautiful country in the world.

My grandfather gave me a book when I was seven years old. It had been handmade and typed, and was filled with fairy tale poems: poems about princesses, kings and queens, and, yes, even unicorns. I hadn’t really been interested in fairy tales until I read those poems. They highlighted moments here and there, and called me to the meaningful depths of ordinary life. I don’t know what became of the book. I recently called the library in Golden, B.C. to see if they knew of it, and they tried to track it down, but they lost the trail.

I haven’t. And when I consider what to offer the spirit of my grandfather from the realm of wonder and all-things-running-beneath, a picture from a Grimm’s fairy tale comes to mind. It comes from a story called “The Boots of Buffalo-Leather.”

A king, dressed as an ordinary man, had gone out into the country, and he was sitting on an old tree stump when a soldier approached. The fellow had nothing to but an old coat to keep the rain off his back.

He shook the king’s hand and stretched himself out on the grass by his side as if they were comrades, of the same class.

“I see you’ve got good boots, well blacked,” he said. “But if you had to travel as much as I have, they wouldn’t keep their shine. Look at mine, they’re made of buffalo-leather. I’ve worn them for a long time, and they’ve taken me through thick and thin.”

The king was impressed. This charming, fearless fellow clearly knew what he was talking about.

After a while, the soldier got hungry and said, “I can stay no longer, Brother Brightboots. Where does this road lead?”

The king didn’t know, but when the soldier stood up, he stood up with him, thinking to himself, “Here is a man to follow.”

The picture of the statue comes from the Vimy Ridge memorial in France. A cloaked young woman stands on top of the front wall overlooking the Douai Plains where the battle was fought. The saddened figure is known as “Canada Bereft,” or “Mother Canada.” She faces eastward, looking out to the dawn of the new day