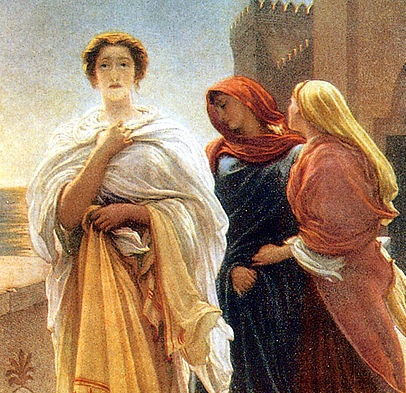 In his book, The Practice of Dream Healing, Edward Tick writes:

…in our contemporary moral vacuum, public figures seem to see it as their duty to resist and deny the need for shriving.

Shriving. It’s an old word, so unused and unpracticed that it has slipped out of our vocabulary. Rooted in the Latin word “scribere”, meaning “to write”, shriving came to mean making or hearing a confession, imposing penance, or seeking absolution.

Abraham Lincoln shrove in his famous Gettysburg address during the Civil War. On November 19, 1863, he inaugurated the Soldier’s National Cemetery in Gettysburg, Pennsylvania, the final resting place for soldiers who had fought and died in the fields of Gettysburg. The President was feeling unwell as he stood before the crowd of over 10,000 people. He spoke briefly. There are several versions of what he said, but his speech began with the famous words: “Four score and seven years ago, our fathers brought forth on this continent, a new nation … a nation now involved in a great civil war.”

He went on to shrive:

…in a larger sense, we can not consecrate – we can not hallow – this ground. The brave men, living and dead, who struggled here, have consecrated it, far above our poor power to add or detract. The world will little note, nor long remember what we say here, but it can never forget what they did here.

Lincoln was very weak that day. His assistant secretary noted that he had a “ghastly color” and that he was “sad, mournful, almost haggard.” Later he was diagnosed with a mild case of smallpox.

In his Second Inaugural Address, made in March, 1865, when the end of the war was in sight, Lincoln shrove once more, this time declaring that the Civil War needed to be understood as divine punishment for slavery, a sin in which all Americans were complicit.

Lincoln was one of the last leaders to shrive, writes Tick. Since Vietnam, generals have not made public apologies. They have not grieved the penalties of war, or the suffering of innocents. Their refusal to shrive leaves the people “who fought or resisted the war carrying the moral and spiritual pain and stain of responsibility.” Presidents since have failed to acknowledge their betrayals, and their refusal has left the community unable to grieve, cleanse, or move on, says Tick. Instead, “in our contemporary moral vacuum, public figures seem to see it as their duty to resist and deny the need for shriving.”

Since 1979, Edward Tick has been working as a psychotherapist with veterans and survivors of war and violence. At the end of the Vietnam war, PTSD wasn’t a recognized diagnostic category. Old high school friends stumbled into his clinic, their lives in shambles, ruined and purposeless. Tick spent four years working with vets who couldn’t reenter urban America even for a day. He searched for ways to heal them. He traveled and studied warrior traditions worldwide, looking for holistic and spiritual approaches. How did other cultures rehabilitate their warriors? In his powerful book, War and the Soul, he tells us that after many decades of counselling, he came to see PTSD not as a “stress disorder” but as “an identity disorder and a soul wound affecting the personality at the deepest level.” He sought to map veterans’ inner worlds so that they could find their way back, and their loved ones could be given a guide to facilitating their homecoming.

In ancient Greece, performances of tragedy gave people a way to publicly express their grief. The playwrights Aeschylus and Euripides created characters who shrove on behalf of the whole community. Tragedy became an outlet for acknowledging and condemning the ruinous effects of war. In The Practice of Dream Healing, Tick describes his experience at Epidaurus near Athens where he witnessed Euripides’ play, “The Trojan Women”. Staged in an ancient amphitheater with magnificent acoustics, the play began after the Trojans had been conquered by the Greeks. Hekabe, Queen of Troy, led a chorus of women in a writhing snake dance of agony. Their beloved city had been sacked. They had lost husbands, fathers, sons, daughters, and homes. Hekabe’s daughter, the seer Kassandra, had gone mad. Hekabe was being taken as a slave, and her grandson and heir to the throne had been torn from his mother and put to death. From the depths of her soul, Hekabe uttered a wild and terrible sound: “An-a-the-ma! An-a-the-ma!” Her cry shook the doctor to his bones.

“Something in me from pre-memory was wrenched free. I shuddered. I felt nauseous. Pity and compassion and revulsion surged from my heart and flooded my body. Anathema. Cursed. Wronged. Against the theme. Against the way. Against the grain. Against the order. Anathema – this was what war was and what war did.”

As he left the theatre, Tick was still shuddering. He had an “uplifting inside-out feeling throughout my body that lasted for days.” He felt that the play had resonating impact because it juxtaposed the suffering women with their conquerors. Two archetypes collided, the callous perpetrators and the ruined victims. The conquerors saw the pain they had inflicted. They heard the cry that ripped from Hekates’ soul: “Anathema!” The witnesses underwent a catharsis. “I felt the sickness that is moral inversion,” writes Tick. “By feeling and seeing it in consciousness, I was cleansed of its pollution and put back in balance.”

After the performance, Tick happened to speak with an actress from the chorus. She told him she aspired to play the role of Hekabe, but it would take decades of study and practice to utter that soul and bone-rattling cry.

“This is what the melancholic Lincoln had felt and tried to express in the few elegant words of the Gettysburg Address,” says Tick.

This is what he had called on our country to do after our Civil War and what we failed to do then and in every war since. But without such catharsis, there could be no purification, no transformation, no rejoining of the community, and no homecoming. (13, The Practice of Dream Healing)

Unlike Greek tragedy, the news of the day doesn’t give us an outlet for catharsis. We see the victims of war in Ukraine, shocked, grieving, dislocated, flocking to Poland and Romania, burrowing in basement cellars. We hear the horror stories of the refugees and survivors, but we don’t see their conquerors. They are silent, removed, disengaged from the realities on the ground. We only see the cover up, the big lie, spun from the refusal to see the wounds they have inflicted.

When will the tide turn, I wonder? It is somewhat heartening to see the Assembly of First Nations preparing to go to the Vatican to visit Pope Francis. The way he addresses the genocide in Catholic-run residential schools could set an example for leaders everywhere. Will he repeal the Papal Bull of 1493 that made any land not inhabited by Christians available to be “discovered”? 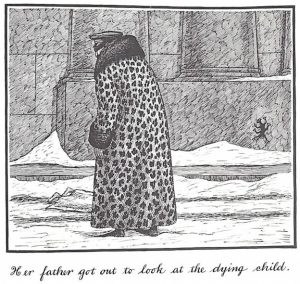 Featured image: Helen on the Walls of Troy, by Frederic Leighton
Final image: Edward Gorey from “The Hapless Child,” 1961

← Looking Back at the Looking Glass No Speak →