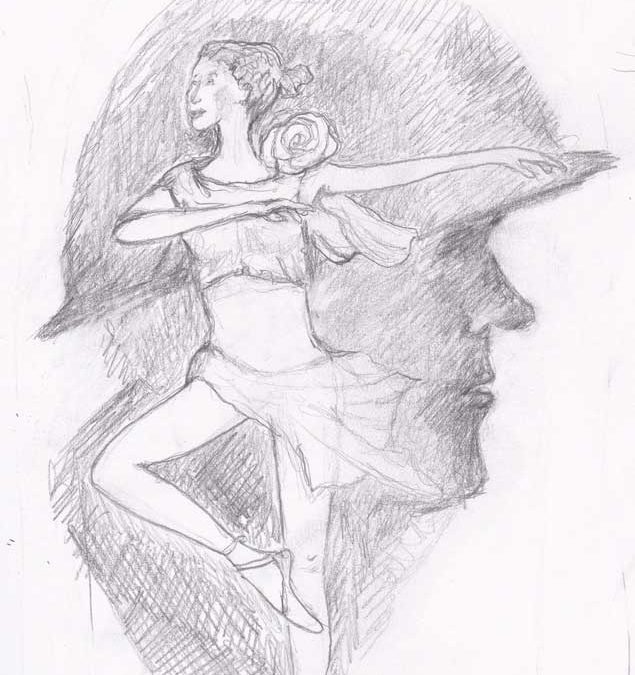 We are both missing
the other leg to stand on,
but I don’t care, I could share—
Aren’t we already not far apart?

The poem and illustration are inspired by Hans Christian Andersen’s story, The Steadfast Tin Soldier. In the story, a defective soldier who is missing a leg is lying on a table in front of a paper castle. A paper dancer does pirouettes in front of the door, wearing a tinsel rose and a blue scarf. The soldier falls in love with the paper dancer, and then one day, after being carelessly put on the windowsill. a mischievous wind comes along and blows him onto the street.  He falls headfirst, three storeys down, and now it’s downhill all way for the soldier. He is swept into the rain gutter and into a lake where he sinks and is swallowed by a carp. The carp is caught, and, amazingly, he is returned to the table in the nursery, but then he and the paper dancer are blown into the fire. His tin body melts with her tinsel rose, and, in the morning, the maid who comes to clean out the fireplace finds, in the ashes, a single tin heart.

When I went to draw the paper dancer, I was surprised that she became real, and more surprised when the shadow of the castle door behind her took the shape of a man. Here is my offering for Remembrance Day, in memory of my grandfather who fought in the First World War, and all the wounded soldiers, then and now.

poem and illustration by Michelle Tocher

← The 12th Wise Woman: In Memoriam Dancing with Cinderella →