The Land of Souls 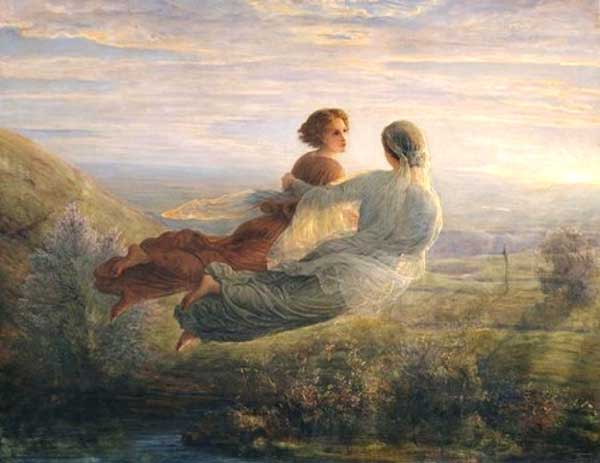 Recently, several dear friends have suffered losses of loved ones. The loss of a mother. The loss of a daughter. I keep going back to a story that I found in the Yellow Fairy Book, an aboriginal tale called “The Land of Souls.” It may be just a fragment, but it still holds life. It still provides images to inform an experience that is so very hard to express. Here’s how the story goes.

A young Indian chief loves a beautiful woman in the tribe. He has his whole heart set on her and so the people prepare a big feast to celebrate their union. The night before the ceremony, the maiden is struck by a sudden illness, and she is dead before sunrise. The young chief is beside himself with grief. He sits by her burial mound, night and day. He doesn’t hunt. He doesn’t eat.

One night, in this black place, he has the flare of a memory. One of the very, very old elders once said that there was a path that led to the land of souls, and if you looked carefully, you would find it.

The next morning he packs some food in a pouch and slings an extra skin over his shoulder. He whistles for his dog, and sets off for the land of souls without a clue where he is going. Yet he is sure that if the path exists, he will find it.

He wanders without direction for a while, but then he remembers that the old ones once said the land of souls lay to the south. So he sets off in that direction, walking heavily through snow-covered forests, over hills and streams. As he moves to the south, the snow melts. Soon the trees are budding and flowers are springing up under his feet. The warm air and the fragrant meadows reassure him. He walks lightly and swiftly. Then he comes to a dark wood and follows a path that leads up a steep cliff to a wigwam. An old man stands before it, clothed in skins, and holding a staff in his hand.

“I was waiting for you,” he says. “I know the purpose of your journey. It was only a short while ago when the one you are seeking came here. Rest, as she rested, and then I’ll tell you where to go from here.”

The young man goes inside the wigwam and he lies down, but he can’t rest. Soon, he rises. The old man rises with him. They go outside, and the elder points to a distant body of water and to the plains that lie between them.

“That is the land of souls,” he says. “But no man enters it without leaving his body behind. So, lay your body down, your bow and arrows, your skin, and your dog. I will keep them safe for you while you are gone.”

The old man turns away and the young chief suddenly feels light as air. His feet hardly seem to touch the ground. He flies down the hill and into the meadow. The warm earth grows sweeter as he sweeps along the plain. Flowers blossom all around him, and animals come out of their hiding places. Deer, bear, cougar and wolf approach him without fear and nuzzle him. The birds circle and perch on the flowers and the branches of the trees. Even the fish in the stream lift their heads up out of the water to watch him pass by. He notes with wonder that he doesn’t stumble over rocks and trees – he goes through them. They are not physical forms, he realizes. They are the souls of the rocks and trees. He is in the land of shadows.

He flies along through the field until he comes to the shore of a great lake. A lovely island stands in the middle of it, and on the bank sits a canoe made of glittering stone with two shining paddles.

Full of energy and joy, he jumps into the canoe and seizes a paddle. He pushes off from shore, and begins to move the boat across the lake. Then, to his amazement, he sees his darling girl paddling near to him in her own stone canoe. They can’t touch one another, though, because great waves roll between them. The waves threaten to sink their boats, and when they look down into the water they are terrified. They see the bones of those who have gone before them, and hear the cries of men and women who have lost their boats and are struggling in the waves. All they can do is paddle with resolve, trusting in the protection of Great Spirit and what they know in their own hearts.

At last they reach the shore of the Happy Island. There, amid the flowery fields and banks of rushing streams, they know no hunger, no thirst, no fear, no cold nor heat. The air feeds them and the sun warms them. They forget the dead for they see no graves, suffer no losses, and have no thoughts of hunting or war.

They would gladly stay here forever, but in the murmur of the wind, the young chief hears Great Spirit speaking to him. “Return, for you have work to do. Your people need you. You are their leader. My messenger awaits you at the gate. He will show you what to do. Take up the body you left behind. In time you will return to the one you love, but you must leave her now. She will remain as young and as beautiful as when I called her from the Land of Snows.”

This story speaks in so many ways. It opens a conversation about death and near-death experiences, about our own relationship with those who have passed on. What do we experience in and around death’s door? What glimpses do we get of the world on the other side, or the journey of our loved ones after they have laid their bodies down?

The story also peeks into the land on the other side. The Indian chief moves from a world of physical forms to a land of shadows. When I think of that place behind the forms of the world, I’m reminded of Plato’s famous allegory of the cave. He presents us with the image of human beings imprisoned in a cave, unaware of the sunlight behind them that projects their shadows onto a screen. Their lives are entirely identified with the play of those shadows, but when they are released, they see that their lives were only the projections of reality, not reality itself. The idea that the physical world is projected out of the light of the primary reality is an old idea that takes many forms in different philosophies, and is expressed in indigenous wisdom around the world. 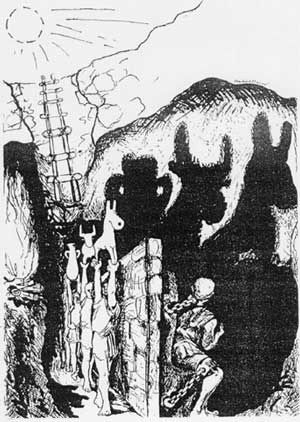 I’m personally drawn to the trek that the young chief makes in the story, his trek from north to south, from a land of snow to a land of light. I once had dream about an old man who returned to his people from the far north. He had spent his whole life living in an arctic environment, more frigid and extreme than anyone in his family could imagine enduring. They couldn’t wait to greet him when he returned—bring him into their warm house, make him cozy in front of the fire, and hear his stories. As I woke from the dream, I realized that the man had been to earth: that earth itself was the frozen taiga where he had lived his life.

My friend Arlene says we should all wear T-shirts that say, “Earth is not for sissies.” It’s not easy to be here, not for anyone. If we have any memory at all of a warmer place, where there is real intimacy, and real love, we will experience the biting cold.

Somehow, though, the story also throws us a line—or rather, a boat. It gives us a clue for how to keep our love alive.

The other day, I wrote in my journal: “Parts of me cry out for love while disregarding the love that is here. I am blind to it. I cry out for a boat while on a boat. I want to know the boat I’m on.”

The longing drew me back to the story, to the impossible stone canoe. To the wild journey. To the bodies and the bones in the water. The maiden and her lover, paddling together, unable to reach one another because of the great waves rolling between them, carving out deep trenches in which they see the scudding bones of those who don’t make it.

The cries of the drowning.

I hear him thinking: “Maybe I should let you go!”

And her thinking: “No! I don’t want you to let me go! But maybe you should. I don’t know!”

They pull towards the shore, hearts on fire with the desire to make it to the other side.