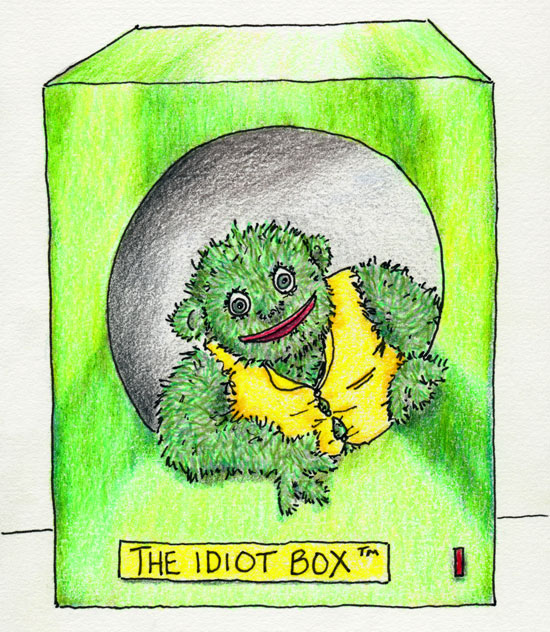 that Given that the “trick or treat” season is upon us, I thought I’d offer my own treat. “The Idiot Box” is an original, unpublished story that I wrote a number of years ago. I’ve blown the dust off it recently because it seems more relevant than ever. Enjoy!

He pleaded with his mother to get him one. He pleaded so much and for so long that finally, on his birthday, she broke down and ordered him one.

The delivery man brought the package to the house on a Saturday afternoon. Tommy’s mother had just started up the stairs to take a nap. The box sat on a dolly and it was so huge that the delivery man hardly got it through the front door. He rolled it into the living room and left it in the middle of the floor.

“Wait an hour and I’ll open it up with you,” said Tommy’s mother, heading up the stairs to nurse her migraine.

For a few minutes, Tommy sat on the sofa and looked at the box. Then he got up and examined it. He found a string in the tape and tugged. The seal opened easily– any child could do it. He pulled the string all the way around the four sides of the box. Then he lifted the flaps. All he had to do now was pull out the metal box. It wasn’t heavy at all!

The “idiot box” was painted lime green and it had a large round hole on one side, just big enough for a child to climb through. Tommy did just that. Once inside, he found himself in a roomy playhouse. It had various glinting electronic screens and buttons, but he couldn’t understand what any of them were for.

He climbed back out and sat cross-legged on the floor with his chin resting on his fists. He studied the box, trying to figure out what he would do with it and why the other children thought it was so much fun.

Then he noticed a little red rocker switch on the outside of the box. He got up and flicked it on.

The inside of the hole lit up, and before Tommy could look in, a creature popped its head out. It was about three feet high and looked like a furry green stuffed animal with beady black eyes and a wide red mouth.

The creature stepped out of the box. It had a round belly and frogs’ legs and it wore a bright yellow vest.

“How do you do?” said the creature, extending its hand.

“No I’m not.” Tommy wanted to say: “You’re the idiot!” but he stopped himself. He had learned to be polite.

“You don’t know anything, do you?” said the creature.

“See, I told you, you don’t know anything. But if you come with me, you’ll find out everything you need to know.”

“Okay,” said Tommy. The strange stuffy animal climbed into the box and Tommy followed. When he got inside, he was amazed and dazed by the pictures that flashed on the screens around him.

“Now we’re on the inside of the world,“ the creature declared. “You can see how everything works. Look around!”

On every screen, Tommy saw images of chaos. People were shouting, bombs were exploding, sirens were blaring, children were crying. The noise was terrible. Tommy plugged his ears.

“No point in plugging your ears,” said the creature. “This is the real world. And look, you can go into any one of these places, see?” He pressed on the screen where a street riot was happening. Suddenly they were out on the street, in the midst of the riot.

“Don’t be scared,” said the creature. “You’re just seeing pictures. Nobody can really shoot you. But this riot is real. It’s happening as we speak. I bet you didn’t know that, did you?”

“That’s because you’re an idiot.”

The creature clicked some sort of remote that he was holding in his hand, and the picture changed. Now they were standing in front of a blazing fire. “There are fires raging all over the world,” said the creature. “This one is in western Canada. I bet you didn’t know that, did you?”

“That’s because you’re an idiot.”

And so the creature led Tommy deeper and deeper into the belly of the world.

An hour or so later, Tommy’s mother came downstairs. She saw the idiot box in the living room with the red rocker switch on. She looked inside and there was Tommy, sitting all by himself in the dark, dazed. Her first thought was to turn off the box, but she had read that a parent should never turn off the idiot box while the child was in it. Children were supposed to come out their own accord.

All the parents were buying these things. They were touted as a ‘playful preparation for the real world.’ Studies had shown that children who had idiot boxes were more successful in school. They were more disciplined, more obedient, and took better instruction. However, the studies that looked at the side effects of idiot boxes on children’s mental health found a marked increase in anxiety and depression. A drug had come along to treat the side effects, so the idiot box had been approved, but Tommy’s mother didn’t like it. She didn’t like it one bit. She waited for two hours for her boy to emerge. When he finally did climb out, he looked at her as if she wasn’t even there.

“Now where are we?” he whimpered.

He blinked and spoke in a tiny voice. “Hi Mom. Where am I?”

“Where do you think you are? You’re at home in the living room.”

Tommy followed his mother to the kitchen. She made him a peanut butter and jelly sandwich and poured him a tall glass of milk. He ate as if he wasn’t tasting anything.

“What happened in that box?” Tommy’s mother asked.

“Lots of stuff about the real world,” he mumbled.

“Well come back to me!” she cried. When he didn’t respond, she suggested that they go upstairs and have a rest. Tommy gave her his hand, which seemed smaller than usual, and she led him upstairs to his room. “How about getting into your favorite pajamas?” she said. “The ones with the giraffes.” She pulled the pajamas out of the drawer while Tommy sat on the bed. Then she helped him to unbutton his shirt. When she took it off, she noticed that his little torso seemed a full size smaller than it had been that morning.

“What’s happened to you?” she asked. “You like you shrank.”

“Oh, sweetie, that’s not true.” Tommy’s mother sat on the bed beside him and pulled him onto her lap. He was definitely lighter.

“Why will you never be big enough to know anything?” she asked quietly.

“Because, Mama, there is too much sadness in the world.”

“And people do awful things to one another in the world. I’ll never be big enough to understand why. All I know is that I’m an idiot.”

“An idiot? No, Tommy!” His mother turned him around so that she could look into his bewildered brown eyes. “You’re not an idiot. You’ve been in an idiot box. I’m the idiot because I bought it for you. Now you listen to me, Tommy.”

She began to rock him the way she used to when he was very little. “You’re the only one who is you in the whole universe.”

“I am?” Tommy dropped his head on his mother’s chest.

“Yes. And inside you is the most important knowledge of all.”

“You’re going to find out. But it’s what you know, deep down. Nobody can give that to you, and nobody can tell you who to love or trust.”

Tommy threw his arms around his mother’s torso. “I love you, Mom,” he cried.

Just then, the idiot popped his head into the room. “If you’re not going to be using me for a while, would you mind turning me off? Nothing bugs me more than having people leave me on. I’ve got better things to do than sit around in that box waiting for some kid to come back. So let’s show a little courtesy, hhhmn?

Tommy’s mother bolted to her feet. “You just stop right there, mister.” She grabbed him by the scruff the neck and held him dangling in the air. “How dare you try to convince my son that he’s an idiot?”

“Well he bought the box, did he not? Or am I talking to the idiot who bought it? To buy an idiot box you have to be an idiot.”

Tommy’s mother wasn’t listening. She had become distracted by something that she was feeling at the nape of the creature’s neck. She set him down on the bed, held him firmly and found the zipper that ran down his back. She pulled the zipper, and a tiny fairy flew out of the mechanics. It flapped around in the air and landed on the dresser. It was a bat-winged creature that stood about two inches high. It had a human face, fiercely intelligent eyes, and a mouth that seemed only able to grin.

“A goblin, actually. I’m usually invisible, unless I get caught.”

Tommy hid behind his mother’s back. “I don’t trust him, he whimpered.”

“So what’s it’s going to take to get rid of you?” Tommy’s mother asked.

“Rid of me?” The goblin crossed its arms over its tiny chest and shrieked with laughter. It fell over backwards, laughing.

“You can’t get rid of goblins!” it cried. “What do you think, that you can destroy all the goblins of the world? We’ve been here a whole lot longer than you humans and we plan to stay as long as there are fools to fool with.”

“Well we’re not fools,” said Tommy suddenly. He stood on the bed and put his hands on his hips like a little cowboy.

The goblin nodded quite seriously and scratched his head. “Yes, well I can see that.”

“What about you? Are you a fool?” Tommy demanded.

“Not by a country mile!” he declared, puffing out his little chest.

“Then what are you doing in an idiot box?”

Tommy’s mother laughed, amazed at her brave little man in his undershirt, who had grown to his proper size (and then some!)
“Well, with all the forests disappearing, fairies have to find employment somewhere….”

“Alright then, let me make you a better offer,” Tommy said. “I will employ you to advise me. You will sit on my shoulder, and whenever you spot something idiotic you will point it out.”

“I can do that!” In a quiet clatter of batwings, the goblin flew to Tommy’s right shoulder and began to settle in. “We used to do this kind of job back in the day, before machines took over,” he said, patting down a tiny place for himself. “Humans get fooled too often by fools who pretend to be wise.”

From that day forward, the goblin and Tommy became friends. Tommy even took his goblin to school. He soon discovered that to all those who had not challenged their idiot boxes, the goblin was invisible. For several years, Tommy was the only one who had a fairy friend. But as he got a little bit older, he started to notice more and more goblins appearing on children’s shoulders. He also noticed, however, that children are sometimes lost to goblins, and those children disappear.

Story and illustration by Michelle Tocher, © 2017.