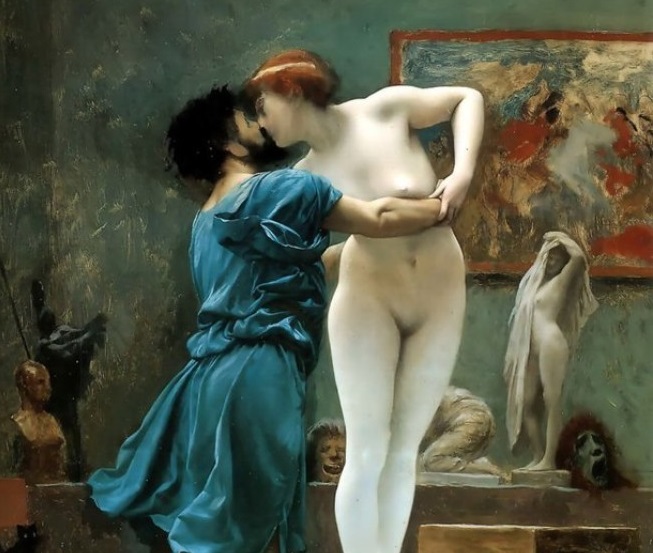 You dreamt of failing in a finishing school. You were never going to succeed at becoming a Lady. You submitted yourself to endless lessons in etiquette. You allowed every natural instinct to be critiqued, and eventually all the humiliations and tiny tortures silenced you in the presence of others more fit and clever.

Then, in the dream, you took a plate of fruit from a banquet table. You didn’t know that you had performed an inappropriate act—until you found your plate of strawberries crawling with black bugs.

You were demoted. Given space in an auditorium no bigger than a school locker (standing room only.) You suffered in there—purged the demon of your natural wildness. When you stepped out of your confinement, you were complimented for your grace, and called a ‘dancer.’

By whom? I wondered as I woke. Whoever she was, she was Finished. 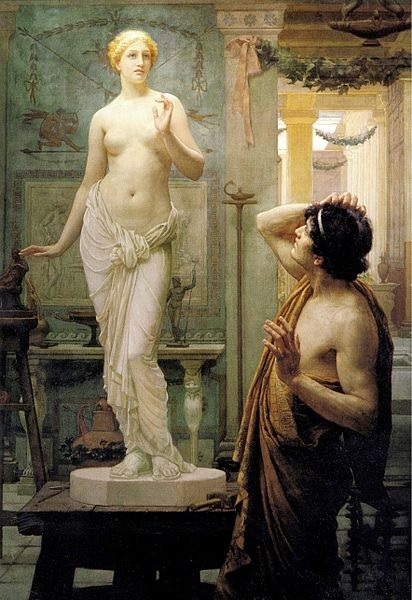 Pygmalion’s statue was perfect. He had carved the lady in white marble, in the image of the wife he wanted because he was disgusted by the indecent women of the city who shamelessly sold their bodies and had “lost the power of blushing.” Ovid says that with the loss of that power, “they turned into stones–a very small difference, really.” (Ovid, Metamorphosis, X, 310)

Pygmalion made love to his stone statue but he wanted greater satisfaction, so he went to the shrine of Venus and petitioned her to bring the statue to life. Venus granted his wish and when he went home to his stone lady, he found a blushing bride.

What would she have to say about it?

Pygmalion wants to name me. I told him I don’t want a name but I’m rethinking that.

Without a name I’ll be known as Pygmalion’s wife. Ugh! I don’t want that name. I have milky white skin. I’ll call myself Galatea.

He suffered to free me, but I am not his possession. I am the image he saw in the stone. Had I not been there in the first place, he wouldn’t have been able to carve me out. And he only did so because I agreed to it. I wanted my freedom. The goddess granted my wish but she would not have been able to turn stone to flesh if I had hardened against her spells.

Now here I am, Finished. I can be no more perfect than I am right now. Perfect flesh. Perfect form. Perfect sensibilities.

I’ve locked the door. Pig’s gone out for food. He’ll bring people back. He’ll want to show me off. I’ll attract envy. Jealous wives will try to find fault. Husbands will test me. Philosophers will study me—they’ll watch the process by which stone-made-flesh corrupts.

Damn. I’ll age. This is intolerable. With every thought I’m thinking, I’m corrupting.

I could escape, but where would I go? I can’t run and hide. I’m nowhere near ready for that kind of suffering. I don’t even want to be inconvenienced!

I’m going to have to face the mortal condition. Somehow. What will I do?

I know. I’ll start a Finishing School for all those wanton shameless women Pig detests. I’ll turn them into women of stone. Ha! 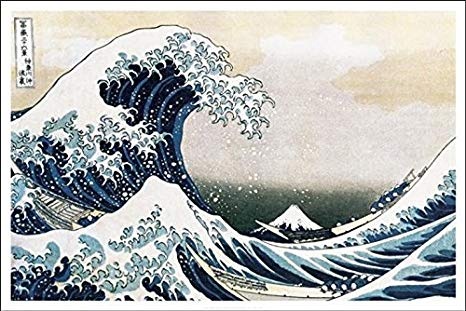 The dream illustrates the state that I’m in, sitting amid a thousand unfinished pieces—stories, poems, books unpublished—round shapes that don’t fit into square genres, and other works that appear to be unfit for this (or possibly any other Time.)

I am questioning the Finish Line. I have put so much effort into finishing, into working and reworking, making my writings relevant to our day and age. Yet now I have the awful feeling that there’s more truth on the editing floor than there is between the covers of any book that finds its way to the mainstream. It’s so satisfying to hear Galatea say: “I am not his possession. I am the image he saw in the stone.”

She is the soul of the world. Now that she’s out, she’s no longer finished. She’s bound for decay, but in the decay lies the possibility for knowing herself, for being known, for touching and being touched.

Yet all my (imagined) Galatea can think to do is make more stone. She hardly breathes her own air before she’s giving herself over to the project of turning wanton girls into my fair ladies.

There’s a wailing inside, a wailing soul struggling with the paradox of our times–an invalidated, alienated subject that can find no home in a world of demeaned objects. I move to the streams that are roaring underground. Books are dissolving, morphing into songs of trees and brooks. Shakespeare said it best:

And this our life, exempt from public haunt, finds tongues in trees, books in the running brooks, sermons in stones, and good in everything.