I TELL FAIRY TALES AND I SPEAK ABOUT THEIR RELEVANCE

to the spells and enchantments of real life.

In this three-part series with Hannah Custis of the Immanence Journal (Spring 2017 edition) I discuss what fairy tales can tell us about how we come under spells in life. You can view the first interview here, and you can access the other two interviews (as well as all the other wonderful articles in the journal) for a nominal subscription fee. http://immanencejournal.com/

“I’ll admit that I came into the topic of “spells” with a certain amount of pessimism – in some ways, it was easy for me to accept all the different ways that we can become spellbound by people or institutions, all the ways we can become enchanted against our will or without our knowledge. I could certainly see how this related to my life. However, Michelle surprised me into thinking more deeply about the purpose of spells for protection, growth, or transformation. I think the greatest hope for me came during our second and third interviews when we began to talk about how the all the characters in a tale reflect parts of our psyche. Some of the characters have windows of conscious awareness and can see the situation more clearly than the spellbound characters. With their help, the spellbound characters can complete seemingly impossible tasks and free themselves. Thinking with fairytale-logic has helped me see how solutions are embedded in a problem, though it may take time, patience, and assistance to find a way through. Now, months after our interview series, I still find myself thinking over parts of our conversations and discovering new insights. Thank you Michelle!” – Hannah Custis, interviewer for Immanence Journal, Spring, 2017

Listen to an intimate conversation with Toko-pa Turner, a gifted dreamworker and author of Belonging: Remembering Ourselves Home. Weaving our way through the story of The Briar Rose, Toko-pa and I discussed the subject of exile and the ‘dark gift’ of suffering and loss. 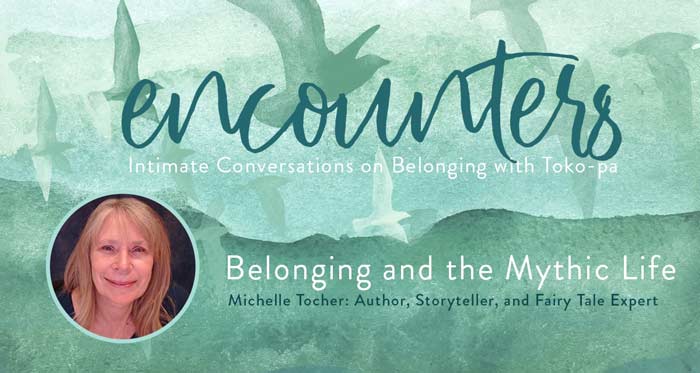 An Interview at the Creativity Café

Katie Curtin, who founded the Creativity Café, interviewed me on the healing power of fairy tales.

An Interview at the Creativity Café

An itroduction to Michelle Tocher and her work with myth and fairy tales.

The Healing Power of Fairy Tales

I heard this song in a dream. It was sung by a five-year-old girl from Asia who had learned it from her mother. She had come to North America to live with adoptive parents, but she had not forgotten her mother’s song. When she began to sing in her sweet, bell-like voice, her mother appeared in the background, and she started to sing with her, and then voices poured in from all parts of the world, singing this beautiful song.

Michelle talks about the uses of imagination, and compares them to two types of “wands”.

How fairy tales can change the way we look at the world, and experience not only human, but non human points of view.

An exploration of the relationship between fairy tales and fate, and an invitation to look “between the lines.”

How fairy tales can become guides to breaking spells and re-inspiriting life.

Michelle briefly relates the classic story Rapunzel to illustrate how the elements of the story speak to our deeper narratives.

A glimpse into the role Dame Gothel plays in Rapunzel, and the way that relationship plays out in life.

Michelle talks about how the story of Rapunzel changed the way she saw towers in the world.

Sign up to my blog receive for original stories, retellings, cartoons, music and more...

Sign up to my Newsletter receive notices on my upcoming workshops and events.