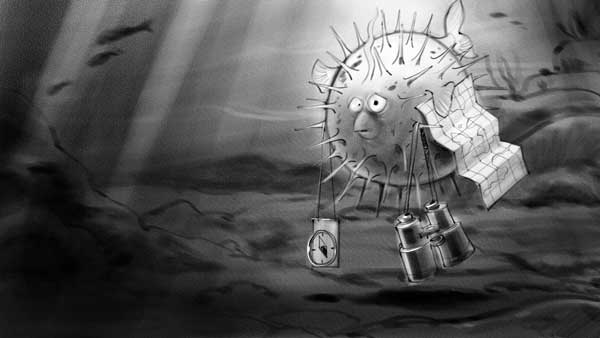 I vividly remember when the story “Soul Fish” came to me, back in the ’90s. I was sitting out on the patio in the warm afternoon sun. I had been in the process of unwinding my communications business after experiencing back pain for several years. I was limping and couldn’t sit at my desk to write at the computer for more than ten minutes without having to lie down to ease the pain.

My mind was filled with anxious thoughts. What’s wrong? What is this? I wanted a diagnosis, but nobody could detect the source of  the pain. It couldn’t be found on an X-ray. It was a phantom. I might as well have been asking the doctors to find my soul.

What was the “soul,” I wondered? I had been reading the works of various philosophers on the subject. Plato. Viktor Frankl. Joseph Needleman. Joseph Needleman had asked the question, “How can I survive and make money while holding onto my soul?” And Viktor Frankl had spoken deeply and eloquently about the need to see humans as spiritual beings, first and foremost, and not as bundles of instincts and drives competing to survive in a meaningless universe.

I understood that I was having a crisis, not just of the body, but of the soul. What was the purpose of my life if I could not do my work? I had invested a great deal of myself and my meaning in my communications business. It had been my mission to help non-profit organizations give voice to their values and challenge old thinking that caused harm to people and the planet. I wanted to tell their stories—tell stories in general—spiritual stories that would reflect our predicaments and help us to see our possibilities and choices. I strongly resonated with Viktor Frankl’s book The Doctor of the Soul, and there I was, having to be a doctor to my own soul, and coming round and round again to the question: “What does this health crisis mean for my soul?”

On that sunny afternoon, a response to the question arose in the form of a little puffer fish who had a story to tell. He said, “In the beginning, when I was just a tiny fish in a big sea, I had a soul…” He went on to tell me that he wasn’t long in the world before stashed his soul in a cave because there didn’t seem to be any place for it in the “fish-eat-fish world.” He went to “school,” learned how to survive as a puffer fish, and did pretty well for himself. At a certain point, however, he began to feel a hole inside of him: the existential emptiness that is so familiar to human beings nowadays.

For me, the emptiness was filled when I was working, because work gave my life meaning. But when I stopped working, I fell into that hole inside. I was deeply anxious about having no purpose, nothing to justify my existence. The images in the story spoke strongly to me, and I wondered how the puffer fish would deal with his emptiness. Where would he go when he set off to find his soul? My rational mind had no answers to the question, but our little puffer had an intelligence all his own. He left his bewildered friends and set off on a solitary journey. From there on out, the story was a revelation to me, teeming with mystery.

Eventually, the puffer fish gave up the anxious search and went into a sea cave to rest. In the cave, he “dissolved to the puffer” he had been, and slowly began to adapt to a different world, a world inside the world, in the embrace of the soul. He developed new eyes, new ways of being in the ocean. He met others like him, and discovered that there is a way to live in the “fish-eat-fish world” as a sensitive, open-hearted being.

It has been twenty years since I wrote “Soul Fish.” The story ran out ahead of me, giving me a kind of mythic lifeline through the caves and crevasses of my own healing journey. It was the first of many stories that arrived at that time. I think of them as healing stories, because they came from a place of wholeness, found me in states of anxiety, confusion, and separation, and took me on journeys back to wholeness.

Lately a few people have asked, “Why are you putting “Soul Fish” out there now? Why this story?” Well, not only was it was the first of the mythic stories that came to me at that time, but it’s also still alive in me. I’m still living it, discovering what it’s like to come out into the midst of my soul fish friends. I’m constantly instructed by people who are willing to be open-hearted and present to one another, people who courageously live by their values and not by some survival play-book. These days may appear to be dark, running on empty, but the people who have felt and suffered that emptiness are on soulful journeys that are giving hope to the world. The story celebrates those people, and focuses our attention on the radiance that is growing at the heart of the world.

If you relate to the story, I invite you to share your connections, and also the parts of the story that you find mysterious. What questions does the story prompt you to ask? It’s yours to consider and, if you wish, it’s yours to share. I offer it as food for thought.

← Whitey and the Seal People Artists of the Sea →