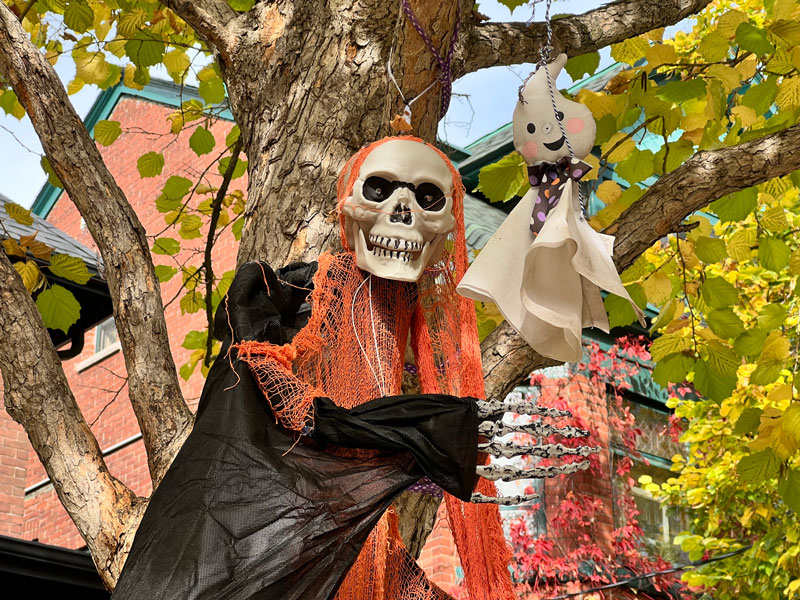 I was taking pictures of Hallowe’en skeletons and ghosts in our neighborhood when I came upon this one specter reaching for her little ghostly child. The moment I put my camera on her, the wind picked her up, and she and her baby turned in my direction. Then a light went on in her eyes! It was a bit of a hair-raising moment, but a very meaningful one because this Hallowe’en we’re launching “The Departure Train,” a sonically immersive audio drama about a woman who dies and boards a train in the afterlife. On her ride to the land of the dead, she reaches back to her daughter Megan who is struggling to find a reason to live. (thedeparturetrain.com)

I’ve had a conflicted relationship with Hallowe’en over the last few years. You would think the horrors of an increasingly violent and unsafe world would be enough horror for everyone. Instead, there seems to be a growing fascination with all things monstrous and macabre. People are decorating their front gardens with beheaded bodies, severed limbs, pots full of gore, and so on. It prompts me to wonder what the purpose of Hallowe’en is, other than making record sales on costumes and candy. (Last year, consumers in the U.S. spent a record 10.14 billion dollars on Hallowe’en paraphernalia, two billion more than the year before.)

The word Hallowe’en comes from All Hallows’ Eve, the hallowed evening before All Saints Day on November 1, and All Souls’ Day on November 2. It initiates the season of Allhallowtide, which was created by Pope Boniface IV in the 7th century. Basically, the church institutionalized festivals of the dead that had been going on for centuries in many places of the world. One tradition dates back to a Celtic festival called Samhain, (pronounced ‘sow-wen’). During Samhain it was believed that the veil between life and the afterlife thinned, and the souls of the dead could return to visit their earthly homes. There was a fair bit of coming and going, as people sometimes reported seeing the recently departed making their way to the otherworld.

During Samhain people put lights in their window to guide the dead back to their homes. Neighbors went from door to door dressed as the dead, begging for ‘soul cakes.’ They would play pranks if they didn’t receive a treat. “Give me a treat, or I might trick you!” Enter scary costumes, ghosts, witches, vampires, dragons and all the rest of the mischief-makers.

In Mexico, The Day of the Dead is traditionally celebrated on November 1 and 2. It is less solemn than All Saints and All Souls Days and is meant to be a joyful celebration rather than a time of mourning. Family and friends gather to pay respects to loved ones who have died. They honor the dead with calaveras (skulls), Aztec marigold flowers known as cempazuchitl, and offerings on home altars that include the favorite food and beverages of the departed. People visit their ancestors’ graves and gift friends with candy skulls. The celebrations often take a humorous tone. Funny events and anecdotes about the departed are shared. There’s also a tradition of writing comical epitaphs to living friends. In a literary form known as calaveras literarias, (literary skulls) people express feelings that can’t otherwise be spoken out loud. Roughly translated (and much funnier in Spanish) one of them goes like this:

Women together, whether dead or alive!
Said la catrina, taking her beau,
It’s easier to cry together
Than it is to deal with this jerk!

I would like to go back to the days when we put a candle in the window for our departed loved ones. We’re in sympathy with the dead at this time of year in the Northern Hemisphere. Here at the end of the harvest, we’re on the brink of winter, headed into the underworld. It’s time to prepare for inclement weather and to pull together our supplies, inside and out. As Skeleton Woman reminds us in the Inuit tale, The Magic Drum, we are wise to invoke our ancestors through the dark, cold winter. And offer them soul cakes.

Because, honestly, who needs any more candy?