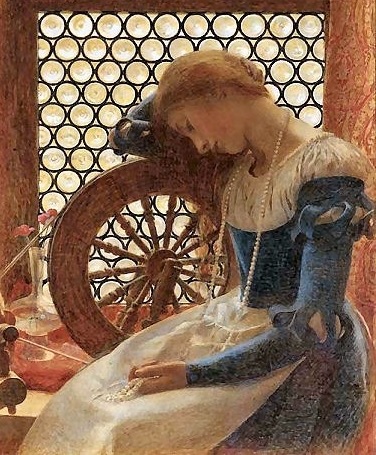 During the 1990s, when I was enduring the worst of the symptoms of chronic pain and fibromyalgia, I moved inward and shifted my attention to the feminine characters in fairy tales. They seemed to know a lot about being cast out of the mainstream and thrown into unexpectedly bad predicaments. I spent a fair bit of time in imaginative dialogues with maidens who were incarcerated in towers, or driven to forest cottages and underworlds. The atmosphere in those places felt potent, charged with the presence of all the human beings who had been drawn there. I’m not the only one who has found Cinderella crying at the hearth, or Beauty waking from her sleep, or the little toy soldier trying to get his bearings in a little paper boat that is rushing down the gutter stream.

Sometimes, as I went about my day, a voice would break through from a place in a fairy tale. It was usually a feminine voice. She would speak or sing me a line or two; sometimes a whole song. I recorded those songs and put all the poems in a collection that I called “The Voice of the Princess.” It stayed on the shelf for years, silent, rather like the fairy tale princess herself.

Lately, though, I’ve been reviving my repertoire and gathering all the material I’ve sung over the years, which includes the songs of the princess. I have considered them quite sacred and have wanted them to remain private but that’s not possible anymore. The ‘voice of the princess’ came from a place of light, and her songs opened shutters into my little dark room. Here is one of them, busily teaching me how to spin straw into gold.

I’m singing the song a capella, so please be forgiving!

Here is my work in the room without doors
Here is my wheel with the straw on the floor
Here is my reason for spinning, for birth
Here is the seed I have thrown on the earth
Here is the ALL I have ever wished to be
The ALL from which I wanted to flee
Not because it’s greener outside the door
But because there’s so much straw here,
gleaming on the floor

Straw is all it is till the spinner makes the weave
The gold’s in what is given, the gift’s in what we leave

We cannot know the name of things
When we set upon the wheel
The gold is made of what we love
And what we love made real.

So stay here in this room without doors
Give it all up and accept what is yours
Hold nothing back and lament no more
What else was all that spinning for?
But to bring you here and sit you down
In the room of impossible dreams

Come back! Come back!
The world has asked
for a spinner.

(Incidentally, you might find interesting to know that the solstice goddesses were spinners. The Lithuanian goddess Saule took to the sky on the winter solstice. Riding a sleigh that was pulled by a horned reindeer, she returned light to the earth by spinning rays from the sun.)