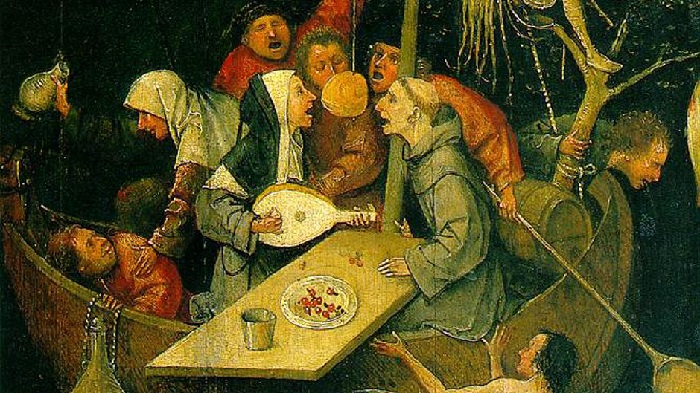 Lately, I’ve been doing some research on the history of madness and the way the fool is portrayed in literature and fairy tales. The fool has always fascinated me, but especially these days. It’s not difficult to feel that we’re all on a “ship of fools,” floundering in the face of enormous global issues while the pilots are driving us straight to the rocks.

The notion of being on a “ship of fools” goes a long way back. Plato elaborated the metaphor in his Republic:

Imagine then a fleet or a ship in which there is a captain who is taller and stronger than any of the crew, but he is a little deaf and has a similar infirmity in sight, and his knowledge of navigation is not much better. The sailors are quarrelling with one another about the steering –every one is of opinion that he has a right to steer, though he has never learned the art of navigation and cannot tell who taught him or when he learned, and will further assert that it cannot be taught, and they are ready to cut in pieces any one who says the contrary. They throng about the captain, begging and praying him to commit the helm to them; and if at any time they do not prevail, but others are preferred to them, they kill the others or throw them overboard, and having first chained up the noble captain’s senses with drink or some narcotic drug, they mutiny and take possession of the ship and make free with the stores; thus, eating and drinking, they proceed on their voyage in such a manner as might be expected of them. Him who is their partisan and cleverly aids them in their plot for getting the ship out of the captain’s hands into their own whether by force or persuasion, they compliment with the name of sailor, pilot, able seaman, and abuse the other sort of man, whom they call a good-for-nothing; but that the true pilot must pay attention to the year and seasons and sky and stars and winds, and whatever else belongs to his art, if he intends to be really qualified for the command of a ship…. Now in vessels which are in a state of mutiny and by sailors who are mutineers, how will the true pilot be regarded? Will he not be called by them a prater, a star-gazer, a good-for-nothing? (Book VI)

Somewhere around 1491, Hieronymus Bosch famously painted “The Ship of Fools.” A fragment of the painting now hangs in the Louvre and depicts ten people adrift in a boat, with two overboard. There’s a lot of commotion on the boat and everybody looks to be rudderless. The nun and the friar are no help, they’re just absorbed with their singing (and possibly one another). 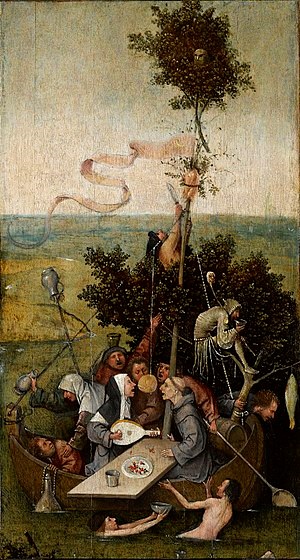 As Michel Foucault points out in Madness and Civilization, the Ship of Fools was not only a feature of the imaginary landscape of Renaissance Europe—these boats really existed. They “conveyed their insane cargo from town to town. Madmen then led and easy wandering existence. The towns drove them outside their limits; they were allowed to wander in the open countryside, when not entrusted to a group of merchants and pilgrims.” (8)

In the fourteenth and fifteenth centuries, many of the cities on the waterways of Europe would be well used to seeing these ‘ships of fools’ approaching their harbors. Foucault suggests that the ships might also have been pilgrimage boats, “highly symbolic cargoes of madmen in search of their reason: some went down the Rhineland rivers toward Belgium and Gheel; others sailed up the Rhine toward the Jura and Besançon.” (9 )

Water was the medium that delivered the unmoored from one place to the other, and Foucault calls the madman the “Passenger par excellence; that is, the prisoner of the passage.” For the mystics of the fifteenth century, this was a representation of the soul itself, the soul as a skiff on the infinite sea of desire, “at the mercy of the sea’s great madness, unless it throws out a solid anchor, faith, or raises its spiritual sails so that the breath of God may bring it to port.” (11-12)

In literature and fairy tales, the fool can utter the most outrageous truths while staying safe under the cover of gibberish. In the modern literary fairy tale, The Dark Princess, written by Richard Kenney, the court fool tells the princess, “A Fool may look closely to know who a person is, and with little insult, for he need only wag his nose to be excused.” This fool has the perspicacity to recognize that the princess is profoundly lonely, made invisible by the blinding light of her beauty. He tells her, “Though I have seen you only darkly, I have seen you deeply; and it is you yourself that I love.” The fool is willing to blind himself to see her true person, and his foolishness, at last, makes the sorrowful, even suicidal princess laugh. (152, Richard Kennedy: Collected Stories)

Another unforgettable wise fool in literature can be found cavorting in Shakespeare’s tragic play, King Lear. The Fool shadows the vain, arrogant king and challenges him with nonsensical, upside-down-inside-out logic. King Lear has exiled his third daughter, Cordelia, on the grounds of insufficient flattery, and the Fool mocks the king and sings him idiotic songs to get him to see his own foolishness.

I marvel what kin thou and thy daughters are:
they’ll have me whipped for speaking true, thou’lt
have me whipped for lying; and sometimes I am
whipped for holding my peace. I had rather be any
kind o’ thing than a fool: and yet I would not be
thee, nuncle; thou hast pared thy wit o’ both sides,
and left nothing i’ the middle: here comes one o’
the parings. (Enter the King’s power-ravenous daughter, Goneril)

Lear doesn’t understand the Fool’s truth because he doesn’t understand his own idiocy, which drives to the heart of why fools are so essential to ship pilots, captains of industry, and all the rest of us. If we captains are not willing to see our own foolishness, our ships are in trouble.

Even when fools are just silly, their stories are wise because they expose the fools in power. A simple example can be found in the Grimm’s fairy tale, The Master-Thief. In the story, a master-thief goes to the church just after midnight. He carries a sack, marches up to the pulpit, and begins to cry in a piercing voice: “Hearken, sinful men! The end of all time has come! Whoever wishes to go to heaven must hop into my sack! I am Saint Peter who opens and shuts the gates of heaven. This is your last opportunity before the world is destroyed. Come quick!”

The parson and clerk are the first to hear the sermon. They come running into the church thinking they had better take this chance to get into heaven the easy way. They climb into the sack and off they go on a bumpy ride to ‘heaven.’ Bang, bang, bang, down the pulpit steps they thump. Slip, slop through the puddles. “We’re going through the rain clouds now,” the thief tells them. Then they’re dragged up the steps of the castle. “Here we are in heaven,” says the thief as he dumps them in the pigeon-house.

Hearing the pigeons fluttering, the two fools say, “Oh, listen, the angels are flapping their wings!” All night long they lie in the cramped and sodden sack, waiting to be released into heaven.

Michel Foucault suggests that the more that reasonable men and women pull away from their own madness, the more knowledge and power they give to fools. “This knowledge, so inaccessible, so formidable, the Fool, in his innocent idiocy, already possesses. While the man of reason and wisdom perceives only fragmentary and all the more unnerving images of it, the Fool bears it intact as an unbroken sphere: that crystal ball which for all others is empty is in his eyes filled with the density of an invisible knowledge.” (22)

The ship of fools was literally and figuratively moored by the end of the fifteenth century. Mad ships became hospitals that confined all kinds of wanderers who didn’t belong in “civil” society, whether they were sane or insane, curable or incurable. In 1656, the Hôpital-Général was founded in Paris, grouping several smaller establishments under one administration. The directors were appointed for life, and they were given powers by the king to judge, decide, and execute punishments. They had at their disposal irons, prisons and dungeons, and no appeal could be made once they had decided.

As time went on and Britain and Europe moved into the mercantile period, hospitals and other “houses of correction” came under the moral imperatives of the work ethic. The inmates were confined as prisoners who had essentially committed the crime of uselessness. They were assigned long and hard days’ work until such time as they could prove their civic utility. The perception of labor that arose during the “Age of Reason” was of course founded on the old story of Adam and Eve. Calvin taught since the Fall, labor had been man’s only means of redemption, and therefore the worst act of rebellion against God was indolence. This negative myth created a punishing atmosphere in the asylums. Foucault writes, “Madness was thus torn from that imaginary freedom which still allowed it to flourish on the Renaissance horizon. Not so long again, it had floundered about in broad daylight: in King Lear, in Don Quixote. But in less than a half-century, it had been sequestered and, in the fortress of confinement, bound to Reason, to the rules of morality and to their monotonous rights.” (64)

One can’t help but wonder where that leaves us today. For all our advances in artificial intelligence, fools seem to abound, and robots (or their creators) are emerging as a whole new class. Just recently, the electric car company Tesla fell months behind on its delivery of the Model 3 sedan, and the company captain, Elon Musk, blamed the malfunction on a robot. Tesla had created a “flufferbot” to pick up fluff in its Model 3 factory. It had only one job to do: pick up fuzzy fiberglass mats and apply them to the cars’ battery packs. The idea was that the fiberglass mats would muffle engine noise. But it turns out that robots aren’t good at grasping anything, especially fluff. “Robots are very bad at picking up fluff,” Musk admitted. To compound the folly, the fiberglass didn’t even work to reduce engine noise and Tesla ended up eliminating the component entirely.

Elon, who’s been getting a lot of fluff lately, now has a few more tribbles! 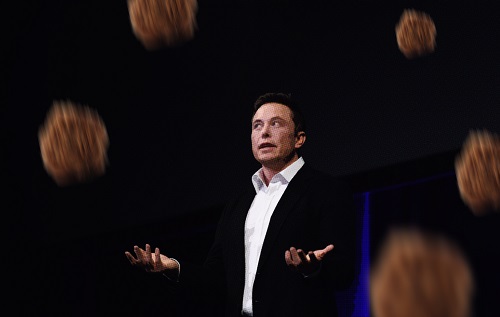