Say YES to the RE-Dress 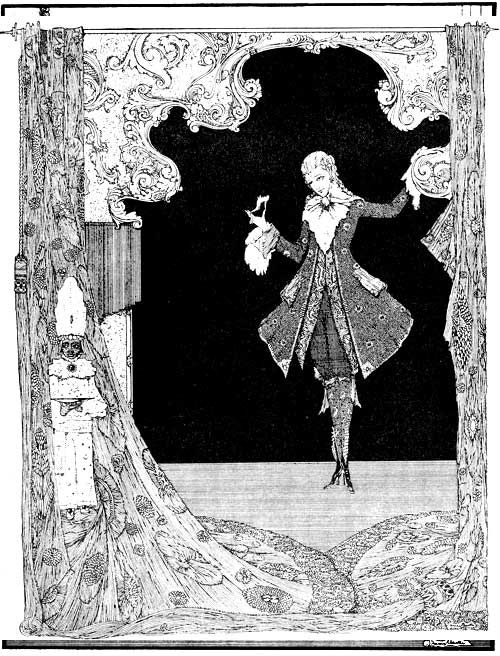 Since the advent of television, the fairy tale has been put to work by the advertising industry, but I don’t know any story that has worked harder than Cinderella. In the 1950’s she was recruited to sell a variety of products, including a cleaning solution called Bab-O. The voices in the TV commercial sang:

Poor Cinderella, she couldn’t go to the ball until she had cleaned the sink.
Now Cinderella had it tough
and to have no Bab-O made it rough.
She worked harder than a dog
but she couldn’t get rid of old sink smog!

In a very early ad 1936 ad by Chevrolet called “A Coach for Cinderella,” Chevrolet went to a lot of trouble and expense to producing a ten-minute technicolor animation to show how Cinderella’s pumpkin coach gets updated. It goes into funky-looking “modernizer” machine and comes out a brand spanking new Chevrolet.

These commercials all have the same message, of course: buy the magic product and your wishes will come true. Women can get a ticket to the ball by buying new cleaning agents and men can shed their beastly appearance by buying the proper grooming items. Advertising offers us a yellow brick road to Oz made possible by whatever consumer product the advertising wizards are trying to sell. And woe be to one who doesn’t join the march. As Bab-O made clear in its print ads, if Cinderella doesn’t use the magic product, she will not only have to stay home, she’ll get whacked by her evil stepmother. 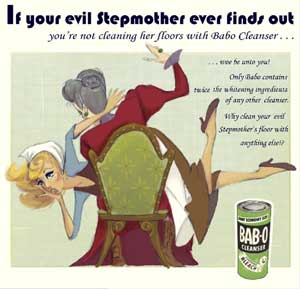 The film industry has certainly had a ball with fairy tales, especially The Disney Corporation, and they’ve powerfully influenced our perception of what these stories are. Those of us who were raised on Disney renditions of Snow White and Cinderella have learned to associate the fairy tale with wishful thinking, childish fantasizing and misogyny. We think of the princess as an airhead who always gets her prince because she’s helpless and needs a strong man to rescue her. (Granted, in recent years, Disney has been trying to change the image of the princess, but the damage has already been done.)

Reality TV has even further inflated the Pollyanna perception of fairy tales, especially in wedding and bridal shows like Say Yes to the Dress. Brides-to-be come to shop for their wedding gowns anxious to look like “Cinderella” at their “fairy tale” weddings. Their wishes are granted by fairy godmothers who, with the wave of their magic wands, produce mounds of tulle at sparkling discounts.

In popular culture, we seem to have lost sight of the purpose of folk and fairy tales, and that’s tragic – for us and for them. They aren’t in this world to serve the interests of commerce – they’re here to serve us, the people: our hearts and minds, our autonomy and freedom. Folk and fairy tales confront the power structures in our lives and our societies. In Breaking the Magic Spell, Jack Zipes suggests that the fairy tale has the potential “to lay bare the degrading tendencies and exploitative machinations of the culture industry so that audiences… can become dependent on themselves.” (p. 108, his italics)

I’ve been sitting with that phrase for some time. It’s just so darn easy to kick back and watch Netflix series for hours on end. Our imaginations don’t have to work at all, and our minds can just rest and be entertained. I find the word ‘entertainment’ deceiving because there’s a lot more going than simple amusement. We’re receiving an overwhelming amount of information that is impossible to process because it’s pouring in at such a fast pace. As Zipes says, there isn’t any room for “autonomous reflection” or analysis of the messages we’re receiving.

As for our imagination, it’s not getting any exercise at all. I can’t help thinking of what Harvey Cox once wrote in The Feast of Fools about the state of imagination in the industrial world:

“In Western Civilization…man’s imaginative faculties have atrophied…we have pressed him so hard towards useful work and rational calculation that he has all but forgotten the joy of ecstatic celebration, antic play and free imagination. His shrunken psyche is just as much a victim of industrialization as were the vent bodies of those luckless children who were once confined to English factories from dawn to dusk.” (p. 12)

Clearly, the purpose of the culture industry is not to foster imagination, reflection, or truth-telling, it’s to create sell-able commercial products. Facts and lies, reality and unreality, propaganda and opinions all get mixed together, crippling “the ability of human beings to distinguish the real from the unreal, the rational from the irrational,” says Zipes. “The subjectivity of the individual has been so invaded at work and in the home by standardization demands of the production line through the mass media and technological inventions that it is difficult to talk any longer about the autonomy of the mind.” (p. 111)

How does one confront the overwhelming invasion of our ‘autonomous mind’? Jack Zipes asks if the public sphere has become so corrupt and manipulative that “the creation of an alternative public sphere is no longer possible?” (p. 117)

I would suggest that the folk and fairy tales ARE a public sphere. They provide us with a common ground: a space to move around in where we can stretch our imaginations and reflect on who and where we are. Welling up out of the human imagination, folk and fairy tales are remembered and passed down because of their power to speak to human experience. In them we recognize our shared predicaments: our wounds, losses, hopes, and marvels. 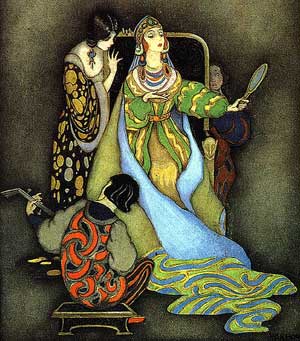 The stories provide us with a mirror of our inner selves. It’s like the mirror that belongs to the princess in the Grimm’s story The Crystal Ball. She’s been put under a spell by a powerful enchanter who has removed her to a castle beyond the edge of the world and turned her into the figure of a decrepit old woman. The mirror is all she has to remind herself of who she actually is. “The mirror will not be deceived,” she tells her suitor. “When you look into this mirror you will see my beauty as I am, in truth.”

We need to reclaim our mirrors, and break the spell that commercial culture has cast on the fairy tales. But how? Jack Zipes says: “…the familiar fairytales must be made strange to us again if we are to respond to the unique images of our own imagination and the possible utopian elements they may contain.” (p. 118)

What will make them strange to us again? A simple meeting with their originals, I would say. We need to meet the story that lives and breathes underneath its commercialized form. For example, I used to think that Rapunzel was a classic princess rescued from the tower by the prince. When I read the original Grimm’s story, I discovered that Rapunzel was a singer. She sang from her tower, and it was her voice that attracted the prince. Later, when she was exiled to the desert by the angry sorceress, she once again attracted the prince by her song. She was like the peyote in the desert. As Wade Davis wrote in One River, the Tarahumara Indians in Mexico would go into the desert seeking peyote, or hikuli, by listening for its song. Hikuli never stops singing, even after it has been harvested. One man said that when he put it under his pillow he couldn’t get any sleep because the song of the plant was so loud. (p. 72)

People often ask me what I think about Disney’s fairy tales and other fairy tale re-makes. The truth is, I don’t rush to the theatre when a new fairy tale film comes out. For a while I was dead-set against seeing any fairy tale remakes. I needed time to develop the autonomy of my own mind, and space to look around for myself in that other realm. Now, if I go and see a fairy tale film, I’ll go to be entertained like everybody else. However, the only way I can go to a fairy tale for a meaningful experience is to listen to storyteller tell a story he or she has lived. Recently, I heard Martin Shaw tell his version of The Handless Maiden, and it was riveting. He lit the story up from the inside out, and made us all shine. Of course, the optimal way of having a meaningful experience of the fairy tale is to go in for myself, and converse with people who are doing the same. I have never had more animated or illuminating exchanges than those I’ve had with others who have found themselves in the myths.

The autonomous human mind is a marvelous thing!

← A Most Grateful Man Tricked or Treated? →