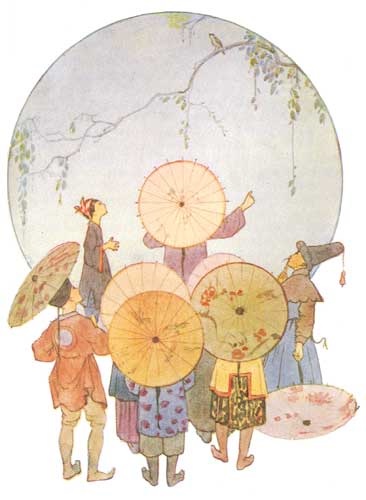 Lately I’ve been using WonderLit to explore the Anderson story, The Emperor and the Nightingale. You might remember that the story is about a nightingale who is captured and taken to the palace of the Emperor of China. She has a voice of unparalleled beauty and when she sings she brings tears to the eyes of the Emperor. He keeps her in a gilded cage and when she wants to go outside, twelve footmen take her for a walk, holding tightly to the ribbons that are tied to her legs.

One day, the Emperor of Japan sends the Emperor of China an artificial nightingale, and a competition ensues. The artificial nightingale is a one-song wonder but it wins the singing contest because it’s more reliable than the real bird who has an unfortunate tendency to improvise. Eventually the nightingale can’t take it anymore. She flies out the window and returns to her forest home by the sea, where she can perch on a willow branch and sing in freedom with the moonlit surf.

Five years pass. Sorrow clouds the countryside and the Emperor becomes ill. He takes to his bed, feeling the weight of Death on his chest. Now he has no company, not even the artificial nightingale, because there’s nobody around to wind it up. The whole palace has gone absolutely quiet. The porcelain halls that once rang with tinkling bells are now covered in thick mats. Not a footstep can be heard.

Then one evening, the Emperor wakes to the sound of the nightingale singing outside his window. Who knows why she has returned?  Perhaps she has heard the quiet …

There’s a moment in the story that is rubbing its scent on me. After one of the artificial nightingale’s public performances, a simple fisherman makes a remark. He’s well acquainted with the voice of the real nightingale because he has heard her singing in the evening while folding his nets and cleaning his boat. He says: “This is very pretty, and nearly the real thing but not quite. I can’t imagine what is lacking.”

What makes one voice natural and another one not? The nightingale’s story has got me listening. What are the songs that have brought tears to my eyes over the years? What songs have I sung and loved and revisited time and time again? They’re a motley collection of tunes from all genres, mixed in with my own compositions. They constitute the repertoire I have, not the one I wish I had, or the one I might have had. They’re the songs that actually belong to my voice.

And who are the singers whose performances are utterly real and natural? Regardless of what decade they sang in, or how many years they lasted, what performances are as true-hearted as the nightingale singing unrestrained on a moonlit night? I’m gathering those performances, wrapping myself up in them. At the very least, they’re a buffer in the chill of everything artificial, derivative, and downright false. Here’s one of the performances that is going into my collection: Scottish singer King Creosote singing “My Favorite Girl.”

← Speaking with Hansel and Gretel Sensitivity →