Parable of the Lost Princess 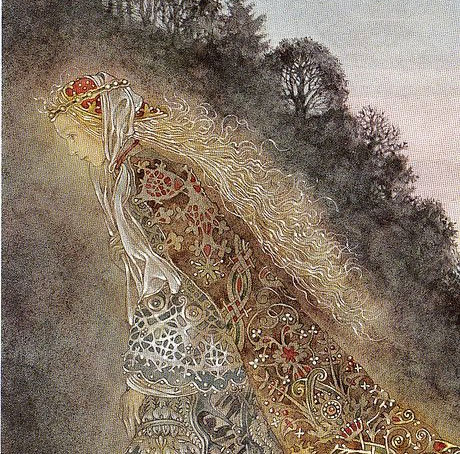 In 1772, a Rabbi named Rabbi Nachman wrote a parable called “The Lost Princess.” In my retelling I have remained true to the Rabbi’s story. I’ll put my reflections in the next blog.

There was once a king who had six sons and one daughter who was very precious to him. However, one day when he was speaking with her, he lost his temper and uttered a curse. “May the no-good one take you!” he cried.

That evening, the princess went to her room, and in the morning, no one knew where she had gone. The king was very distraught, and he appointed the his second-in-command to go out and search for her.

The king’s man took a servant and they traveled from place to place for a very long time. They trekked through deserts, fields and forests. One day, as they were crossing a desert, the king’s man saw a path. He and his man followed the path for some time, and eventually they came to a castle. It looked attractive and well-built, and several soldiers stood guard at the gate.

The king’s man left his horse and servant, and walked to the castle. The soldiers did not hinder him and he walked freely in through the gates. He entered the castle and looked into many rooms where he saw all sorts of things going on, but nobody noticed him.

He came into a grand reception hall where the king sat amid entertainers and musicians. It was all very pleasant, but once again, neither the king nor any of the courtiers showed the least bit of interest in him. Fine foods and delicacies were laid out on the table, and the king’s man filled his plate. After eating, he went to a corner to lie down and watch what was going on in the room.

The king ordered the queen to be brought down, and everyone suddenly burst into joyful, lively conversation. A chair was placed for her next to the king. When the queen had seated herself, she saw the man lying in the corner. She stood up and went over to him.
“Do you recognize me?” she asked.

“I am here because my father cursed me,” she said. “He uttered the words, ‘May the no good one take you!’ And here I am. As you see, the place is pleasant, but everyone is used to having what they want when they desire it. And that makes it no good, no good at all.”

The king’s man told the princess that her father was very sad and that he had been searching for her for several years. “How can I free you?” he asked.

“The only way you can free me is to choose a place and dwell there for one year,” she said. “For a full year you must experience your longing to free me. Dwell in the longing for what you cannot have. Do fasts, and on the last day of the year, fast and do not sleep the entire day.”

He went away and he followed the instructions of the princess. On the last day, after fasting and not sleeping, he and his servant made the journey back to the castle where the princess was imprisoned. On the way he saw a tree heavily laden with tantalizing fruit. Overwhelmed by hunger, he approached the tree and ate a few apples. Immediately after, he dropped to the ground and fell asleep. His servant tried to wake him, but to no avail.

When he finally woke, he asked his servant, “Where am I in the world?”

“You were sleeping for a very long time. Several years,” said the servant. “I survived on the fruit.”

The king’s man was pained to hear that. Once again, he and his servant set forth to the castle. When he came into the reception room, he found the princess in great distress. “If you had only come on that day, you would have removed me from here!” she cried. “But now you have lost everything. I do understand that it is very difficult not to eat, especially on the last day of your fast. Your hunger overpowered you. So let us try again. Choose a place and dwell there for a year, as before. And on the last day you will be allowed to eat. Only you must not sleep, and you must not drink wine because that will make you drowsy. It is essential that you not fall asleep.”

He did as she instructed him. After a year had gone by, he and his servant returned to the castle. On the way, he saw a spring filled with ruby-colored water, and he said to his servant, “Do you see that spring? Its color is red and it smells like wine.” He dismounted, tasted the wine, and right away, he fell into a deep sleep.

This time, he slept for seventy years. Great numbers of soldiers passed by the sleeping man and his own servant lived hidden in the woods.

One day, the princess herself passed by in a covered carriage. She commanded the driver to stop, and walked over to the sleeping man. Of course, she recognized him. She shook him strongly but he did not wake. She sank to the ground and started to moan and weep. “He went through so much effort and labor all those years in order to free me, and he lost his opportunity in one day!” She cried for him and she cried for herself, for she had had been in a no good place for such a very long time, and she could not leave it.
At last, she took the scarf from her head and wrote upon it with her tears. She laid the scarf beside him, rose, boarded her carriage, and rode away.

Some time later, the king’s man woke. He asked his servant, “Where am I in the world?”

The aged servant told his master that many soldiers had passed by and that a carriage had come by. A woman had come to him. She had wept over him in pity for him and for herself.

The king’s man noticed the scarf lying next to him. “Where did this come from?” he asked. The servant explained that the woman had written upon it with her tears.

The king’s man held the scarf up to the sun and began to read the letters. He read all that she had written there. He read her grief. Then he read that she was no longer in the castle where he had found her. If he wanted to find her, he must go looking for a mountain of gold and a castle of pearls.

Now the king’s man left his old servant and went on the search alone. He spent several years trying to locate the mountain in all the settled areas of the world. Finally, he thought, “A mountain of gold and a castle of pearls cannot be found in a settled area.” He went to the deserts, and he wandered there for many years.

One day, he encountered a giant who carried a massive tree on his shoulders. The giant asked, “Who are you?”

Amazed, the giant exclaimed, “I have been in the desert a long time and I have never seen a man here.”

The king’s man explained that he was searching for a mountain of gold and a castle of pearls. Did he know its whereabouts?
No, the giant was certain that it did not exist. He discouraged the king’s man. He said that the princess had filled his mind with nonsense.

The king’s man began to weep bitterly, for he felt certain that the castle must exist somewhere.

Finally the giant said, “I think it’s nonsense, but since you persist, I will tell you that I am appointed over all the animals. I will call them. They live everywhere in the world so perhaps one of them will know where the mountain and the castle can be found.” He called the animals, from the smallest to the largest, all the species, and asked them if they had seen the castle of pearls and the mountain of gold. No, said the animals.

“You see, you have been told nonsense,” said the giant. “If you want my advice, turn back, because you certainly will not find the mountain of gold. It does not exist.”

The man pleaded passionately with him saying, “But it absolutely must exist!”

The giant pitied the man. After thinking for a moment, he said. “I suppose you could visit my brother. He also lives in this desert, and he is appointed over all the birds. Perhaps they know, since they fly to great heights. Find my brother and tell him that I sent you to him.”

For several years the king’s man searched for the giant’s brother. At long last he met a very large man carrying a massive tree, as before. He told the giant that his brother had sent him, and related the whole story. The brother also discouraged him, saying that the castle certainly did not exist. But the man pleaded, so the giant finally said, “I will call the birds. Perhaps they know.”

He summoned all the birds and asked them all, from the smallest to the largest, if they had seen a mountain of gold and a castle of pearls. They answered that they did not know anything about them. “You see, these things do not exist,” said the giant. “If you want my advice, turn back.”

But the king’s man pleaded with him, saying “These things certainly do exist!”

Well, I suppose you could find my brother who lives further beyond in the desert,” said the giant. “He is appointed over all the winds that blow around the world. Perhaps they will know.”

The king’s man spent several more years searching and at last found the giant of the winds. Like his brothers before him, he carried a massive tree. When the giant heard the man’s story, he discouraged him as his brothers had done before. But the king’s man pleaded and finally the giant called the winds. They all blew in but none of them knew about the mountain of gold and the castle of pearls.

The giant said, “You see you have been told nonsense.”

The king’s man began to weep bitterly. “But I know that it exists!”

Then one more wind came along. The giant said, “Why did you not come with the rest?”

The wind answered, “I was delayed because I needed to carry princess to a mountain of gold and a castle of pearls.”

The king’s man wept tears of joy. The giant asked the wind, “What is valuable there?”

The wind answered, “Everything there is valuable.”

The giant turned to the king’s man and said, “Seeing that you have been searching for such a long time through so much difficulty, I don’t want you to be hindered by the cost of all those valuable things. Therefore I am giving you this purse. Every time you reach into it you will receive the money you need to pay for anything you wish.”

Then the giant commanded the wind to take the man to the mountain of gold and the castle of pearls. The wind turned into a storm, picked up the man and carried him to the castle gate.

Guards were posted there. They would not let him enter the city. He reached into his purse, took out money, bribed them, and entered the magnificent place.

He approached a man and rented lodgings. He knew he would be there for some time, for he did not yet have the intelligence or the wisdom to free the princess.

In the end, he did free her … though how he freed her, neither he nor she will tell. 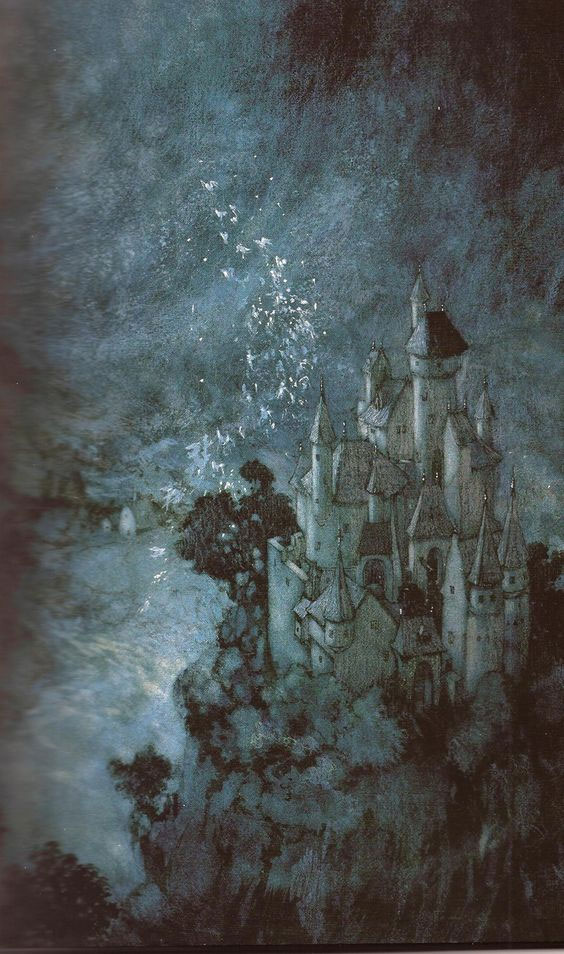 ← The Lost Princess A No Good Place →