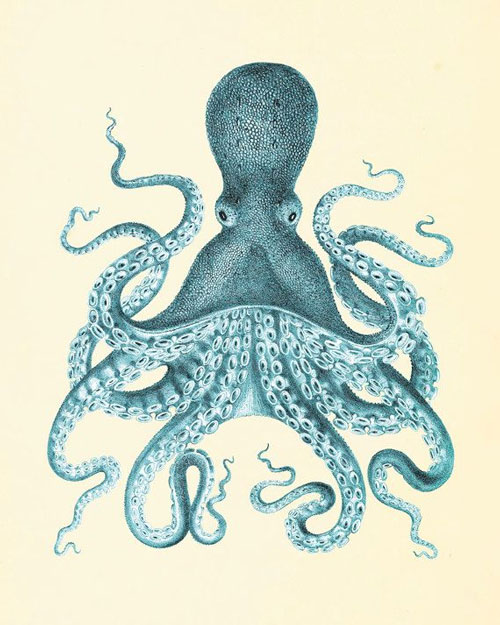 “Octopuses can taste with their entire bodies, but this sense is most exquisitely developed in their suckers. Athena’s is an exceptionally intimate embrace. She is at once touching and tasting my skin, and possibly the muscle, bone, and blood beneath. Through we have just met, Athena already knows me in a way no being has known me before.”

Back in 2002, I went scuba diving in Hawaii. I hadn’t been under the sea for about ten years. I was enjoying a reprieve from the symptoms of fibromyalgia and I could think of no happier thing to do than to immerse myself in the undersea. My dad was on the boat. He had just come through a battle with esophageal cancer and he wanted to get into the water too. He put on a mask and snorkel as I keeled backwards, overboard.

The dive master took our small group to a reef wall, home to living corals, anemones and an array of rainbow-coloured parrotfish, butterflyfish and damselfish. Then the dive master spotted something on the sandy basin. He swam down and tugged at what looked like a rock in the speckled sand. Suddenly there was an explosion of black ink and the diver disappeared. The next thing I knew, he was swimming towards me with his arms full of octopus.

She was red, blood red, and clearly not happy about being yanked from her lair.

I thought, ‘What’s the sign for I don’t think I’m ready to meet an octopus just yet?’ Too late. The diver coaxed one of her suckered arms off of his own and directed it to me. I reached out, unable to resist the octopus handshake. She threaded an arm around mine. Her rash color softened to speckled brown as the arm probed me. I felt calm. I held out my other arm and soon I was in a full octopus embrace. In that moment, dancing together in the sea, I looked into the eye of the octopus. And the octopus looked into the eye of me.

She conveyed a profoundly intelligent thought.

But there was another dimension to it:

True. She had the power to jet off with me and hold me underwater till I drowned.

The thought also contained something that was bigger than both of us:

Recently, I’ve developed a new interest in the octopus. What does it feel like to be an octopus? To inform that question, I’ve been reading Sy Montgomery’s book, The Soul of the Octopus, and Other Minds by Peter Godfrey-Smith.

Now I want to take what I have learned, looking in from the outside, and experience it by looking out from the inside. I want to get out of my human-centered mind and BE the octopus – specifically, the Pacific octopus, like the one I met. 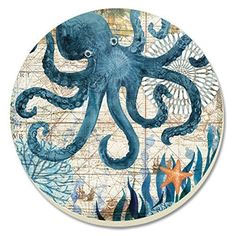 I am the octopus.

I spill ink when I’m afraid.

Full grown, I have arms as long as your legs. I weigh about the same as you do, but I have more flexibility. I can stretch myself to a length twice my size. I can fit my baggy body through a tiny opening, and shape-shift on a whim.

My mouth is between my legs (or arms, if you’d prefer.)

My beak is hidden. I rarely reveal it.

My arms are covered with suckers that grasp and manipulate things the way your fingers do.

I taste the world with my skin.

I have no backbone. I belong to the molluscan class of the invertebrate kingdom. Other invertebrates such as slugs and starfish, are not renowned for their intellect.

On the other arm (haha) I am one of the few invertebrates to build a complex, clever brain. I have 300 million neurons, roughly the same number as an African gray parrot.

I am bringing you into focus with my dominant eye. But to know you, I have to taste you. I will only send out one arm, at first.
Good thing you’re not a smoker. I hate nicotine.

If I accept you, I might let you stroke my head. I am told my skin is silky soft.

I turn red when I’m excited. I pale to white when I am calm. The rest of the time, I’m shades of brown and white, matching my background. I live in dens of rock and shell. I’ve been known to construct a house in the two halves of a coconut shell. That’s a pretty fancy arrangement.

You won’t get a fix on me if I don’t want you to. I can change my colour, shape and texture faster than you can blink your eyes. My skin is a magic light show. Did you just see a dark cloud passing over the seascape? I did that, and didn’t even move. Look again! Now I’m a flat fish. Now I’m a couple of sea snakes. Now I’m a lionfish.

You have to grow up in the wild to learn these things. In the ocean, an octopus who hasn’t mastered the art of camouflage won’t last long. Only about one percent of us survive from the egg, but once we get ourselves anchored on the sea floor, we grow quickly. And learn fast.

Predators are our teachers.

If you trap me, I will look for an escape. I will flood the aquarium. I will get out of the tank and run across the floor. I’ll outsmart you in a hundred ways. I’ll do everything I can to get back to the sea.

But let’s get on to my favorite subject (besides crabs).

My arms have minds of their own. Literally. Three fifths of my neurons are in my arms. I am not just a multitasker. I am a corporation.
Each of my two-and–a-half inch suckers can lift 35 pounds. If you give me a toy, like a jar or a ball that can be screwed together, I will take the two halves apart and screw them back again. Give me something more interesting and I’ll give the jar to a brainless anemone to hold onto for a while.

I have three hearts and my blood is blue-green because I use copper to carry oxygen instead of iron like you. Your brain has four different lobes, each with a different function. My brain IS my body. It’s got about 75 different lobes. Imagine how much I have to coordinate to change my colour and shape, to learn, think, remember, and decide while at the same time processing a flood of taste and touch information pouring in from every inch of skin, 360 degrees around me. I need all my brains!

I know you’re female. I can taste your pleasure. And your pain.

You’ve noticed that I’m watching you.

We’re both intelligent and aware, though we arrived by different routes. Our common ancestor goes back millions of years, before our branch split into vertebrates and invertebrates. Back then, we didn’t have eyes. Or brains, for that matter.
We could not be more alien to one another. Yet we look through similar eyes. We both have corneas, irises that regulate light, and retinas.

Unlike you, though, I can see polarized light. I have wide angle, panoramic vision. I can swivel each eye independently, like a chameleon. I don’t have a blind spot but I can only see about 8 feet away.

My eyes only have one visual pigment. So, though I command a glittering rainbow of colours, I myself am colorblind.
How do I know what colours to turn?

It’s all a matter of taste.

The octopus left me thinking about taste.

Octopus skin is packed with cells called chromatophores. Each contains pigmented granules surrounded by a ring of muscle which can relax or contract when commanded by neurons.

To detect the color of their environment, octopuses use their eyes and then relax or contract their chromatophores to conform to its exact color and texture. Evolutionary biologists at the University of California, Santa Barbara, found that octopus skin contains opsins, the pigmented light-sensitive proteins that are found in eyes. They are, in effect, tasting the light.

So I’m walking around on my own two legs, thinking about all this amazing stuff. Peter Godfrey-Smith writes, “The octopus lives outside the usual body/brain divide.” The octopus brain is spread throughout the body. Every inch of skin is tasting the world, taking it in. What would it be like to have brains in your appendages, to be such a fully embodied intelligence? (You would probably need three hearts!)

Then, the other night, when I was eating a particularly savoury rice and bean dish, I suddenly saw something.
Or rather, tasted something.

For the flash of a second, I imagined what it would it be like to be all tongue, tasting the world with every inch of my skin.
Then I thought of all the things in our environment that taste bad, that are in “bad taste.” Yuck.

An octopus simply couldn’t handle it! 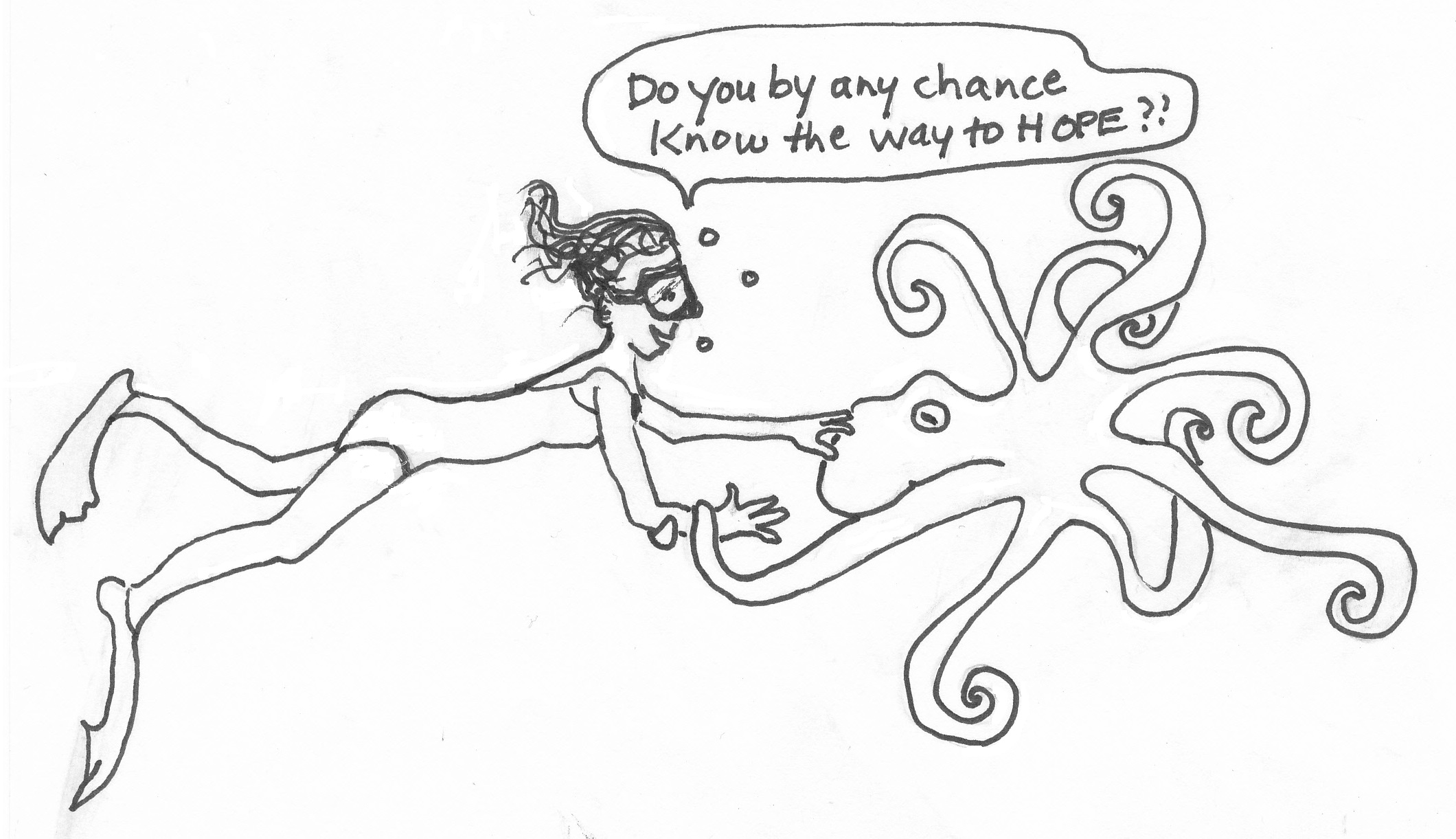