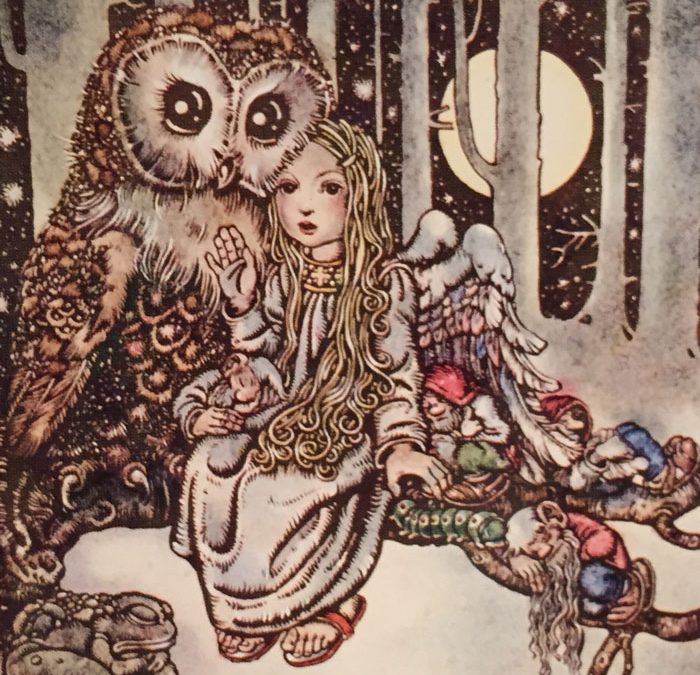 I’d like to dedicate this story “No Speak,” to my friend Ellen Jaffe, who passed on March 16, 2022, and will be missed dearly by many shining spirits.

No Speak is a remarkable child. She’s about four years old. She has a large, round head and her auburn hair is wispy because it hasn’t grown in yet. It’s more like a cloud of gold than hair. Her eyes are dark and believing, and her pale skin has a strawberry flush.

She lives in a big old farmhouse with her mother, her father, and her brother Patrick, who is eight. Every day the school bus comes roaring up to the house, stops and waits, panting like a big yellow and black tiger. It opens its mouth and swallows Patrick up, and then it springs back to life and goes romping away.

Her mother and father have never understood No Speak, not from the day she was born. They couldn’t even name her, for heaven’s sake! They wrangled over the dinner table while she slept in the cradle, but they couldn’t agree on a name. Finally they gave up and called her No Name. She grew and began to smile a sort of half smile, a little wary-of-the-world smile, but she never laughed or cried. She never uttered any sound at all, so they went from calling her No Name to calling her No Speak.

Her mother and her father are hoping to find a real name for her by the time she is ready for school. Some people have offered suggestions, like the babysitter who said: “No Speak should be called No Worry.”

Her mother does worry. She worries that her child is No Thing, No Thing at all. She wonders what she will do with this generic child with whom she has absolutely no connection.

What nobody knows is that No Speak has a gift. Oh, the cat knows. The kitchen table knows. The curtains know. But Mother, Father and Patrick don’t know, and what they don’t know is this:

When No Speak opens her mouth to speak, something happens to the people in the room. Her family members freeze as if they were spell-bound. They can’t hear or see or feel a thing. Then stars pour out of No Speak’s mouth. They make music so beautiful that the curtains wave, the kitchen table shivers and the cat purrs, wrapping herself around the girl’s feet. When the song is fully out, all the little stars cluster together to become one glowing sphere. The sphere emits a spray of tiny bells and bobs around the room. Everything it approaches is lit up so brightly that it speaks.

No Speak’s star is like a master key that can unlock all the secrets of the universe.

Since the star’s first appearance in her first year of life, No Speak has learned many things. The whispering pines around the farmhouse have told her that the house has burned down three times over two centuries. They warn No Speak to keep an eye on Patrick, because every time, the fire has been started by a ten-year-old boy. The lace curtain in the kitchen has told her that her mother had a little girl before she was born, but the baby tumbled into a well of dreams and never woke again. The curtain has told her many things that her mother couldn’t or wouldn’t say. In fact, her mother is so good at putting things out of her mind that she can honestly deny they ever happened. The curtain catches those unspeakable things and holds them in her lace like bugs in a spider’s web. Even the cat has spoken. She is an old tabby who doesn’t see too well but when her fur goes up, she can sense an event coming ten days away.

As much as No Speak might wish to warn her parents of fire, or tell them what she knows, it is impossible for her to do so, because every time she opens her mouth, her family members freeze. They have never heard a word she has had to say.

One night after supper, No Speak was sitting at the head of the table while Mother, Father, and Patrick were huddled together at the other end. They were all doing Patrick’s homework, puzzling over his reading comprehension quiz and arguing over the truth or falseness of the statement, “An owl is a very clever bird.” Father argued that an owl is in fact quite stupid, and Mother argued that if an owl can survive, it is plenty smart enough. Patrick wanted to write down true AND false, but neither parent would allow him to do that even though he was prepared to go to school and defend both positions.

No Speak had a sudden urge to speak. It came upon her, almost against her will. Out came the song, and the family froze. Celestial music streamed from her and the star ball formed. The cat shot out of her bed and leapt onto the table before the star had even finished gathering its sparks together.

She yowled by way of greeting. Then she began prancing around the sphere. They orbited one another like the sun and the moon. The cat purred loudly and every now and then she would bat the sphere with her paw as if to say, “No, really?”

When their conversation ended, the star floated over to No Speak. It hovered above her left shoulder while the tabby positioned herself squarely in front of the child. Nose to nose, they gazed into one another’s eyes.

No Speak’s face flushed bright pink. Maybe now she would have an actual person to talk to, somebody who might want to know her.

The air began to sparkle. Then No Speak saw a pale, moving rainbow come washing in through the walls. It began to pulse, and with every beat it grew stronger and more vibrant until a magnificent angel took form. She had massive white wings. Let it never be said that an angel doesn’t have wings! Her hair was long but you couldn’t see the end of it because it mingled with her robes. They were both made up of those liquid rainbow colors. Her green eyes glistened like emeralds in the rain, and she smiled a soft half-smile that emitted the fragrance of strawberries.

Standing beside the table, the angel offered her open hand. No Speak wanted to take it, but she couldn’t move her arm. She felt as paralyzed as her family members at the opposite end of the table.

Only the star moved. It floated, somewhat reluctantly, almost sadly, towards the angel and settled in her outstretched palm.

Now the angel spoke, or rather, sang. “No Speak, you are almost five years old. It is time for your stars to return to the fold. Most children do not keep them so long, and yours are uncommonly strong. Remember that we are not far away, and very near on the desolate days.”

No Speak tried to cry out in protest, but no sound came out of her mouth. The angel faded the way a rainbow fades when clouds veil the sun, and No Speak was left feeling as alone as a kitten who had fallen into a well.

Mother, Father and Patrick jolted out of their trance to see No Speak sitting at the table with tears rolling down her cheeks. Mother gasped. “Are you crying? My goodness, she’s crying!” She leapt out of her chair and went to her daughter. “Oh sweetheart, what is it?” She hoisted her onto her lap and cuddled her.

“My stars are gone,” said No Speak.

“Say something else!” said Patrick.

“My stars are gone,” she whimpered.

“Try something else,” said Father.

“They’re gone forever,” she said, and she wept.

“Forever! Did you hear that?” Father got up and grabbed some tissue from the counter so that Mother could wipe her tears. She rocked her daughter and everybody kissed her. Even Patrick gave her a peck. They welcomed her home and made her talk and talk, say this and say that until they were satisfied that yes indeed, No Speak could speak.

As for the stars, they were put out of mind. The curtain caught them in her lacy web, dimming the light from outside. 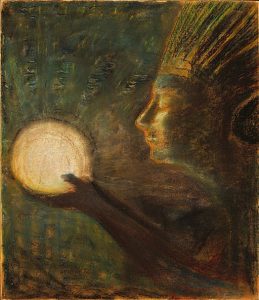 When I finished writing “No Speak,” I was filled with longing for what is lost when we start school, when we get named, labeled, assessed, examined, streamed, recognized as special, or written off and ignored. Some time, around the age of four, the stars that live in us, the stars that live in trees and plants, clouds and creatures, gather and leave. We learn that trees don’t speak, flowers don’t nod to us, the rivers and the streams are no more than the sum of their atoms, and the soil is just dirt and gravel.

When I was a kid, I would smash rocks, sitting on the curb of the street. I’d look for the crystals inside. Anything that gleamed or glittered I prized. I had been with my father to the Petroleum Club in Calgary, and I remember going to the “Rock Club,” and gazing through glass cases at magical caves of amethyst and wands of quartz. They held star memories, traces of brightness that glimmered beyond the named world, the naman-rupa in Indian philosophy.

Now, much later in my life, I am enthralled by the way we spell the world, and the way it is possible to reach beyond names, into the nameless and the unnamable. I wish we ordinary mortals had more experiences of being greeted by friendly strangers who see who we are without knowing our names. I wish we could see past one another’s names more often. We would re-enchant the world if we became more attuned to one another’s light. The French author Jacques Lusseyran, who lost his sight in childhood, describes how he began to sense the presence of light vibrating in all the forms around him. As he writes in “Against the Pollution of the I,”

The shadow of a tree on the road is not only a visual phenomenon. It is also audible. The oak, the poplar, the nut tree have their own specific levels of sound. The tone of a plane tree is entered like a room. It indicates a certain order in space, zones of tension, and zones of free passage. The same is true of a wall or a whole landscape.

Lusseyran could feel the presence of trees as he approached them. Leaning out his window on a gray, overcast sky, he contacted an atmosphere where sounds had become weak and disconnected. But when the sun was shining, he heard much more intense vibration. He communed with the world in a way that is possible when we attune ourselves to the presence of the forms around us, and the way they make their presence known.

In WonderLit, I encourage writers to move under the surface of the named world, step into another form, and write what they experience without using the name. A shoe, a cup, a daffodil, the shirt of a happy man, all have a life force that we can contact with our starlit imaginations. Even now, I am being called somewhere…

Ellen Jaffe was a poet who knew how to unlock the secret light of the world. She broke stones so well she could catch flashes of starlight in every ordinary moment — on the subway, in the supermarket, in her kitchen, in her bed. It strikes me that she has elevated the ending of “No Speak” by reminding us that we have not lost the master key. 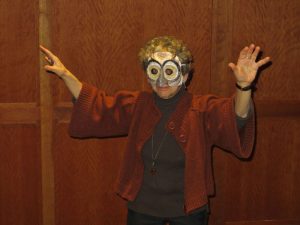 ← Time to Shrive Love in the Dark →