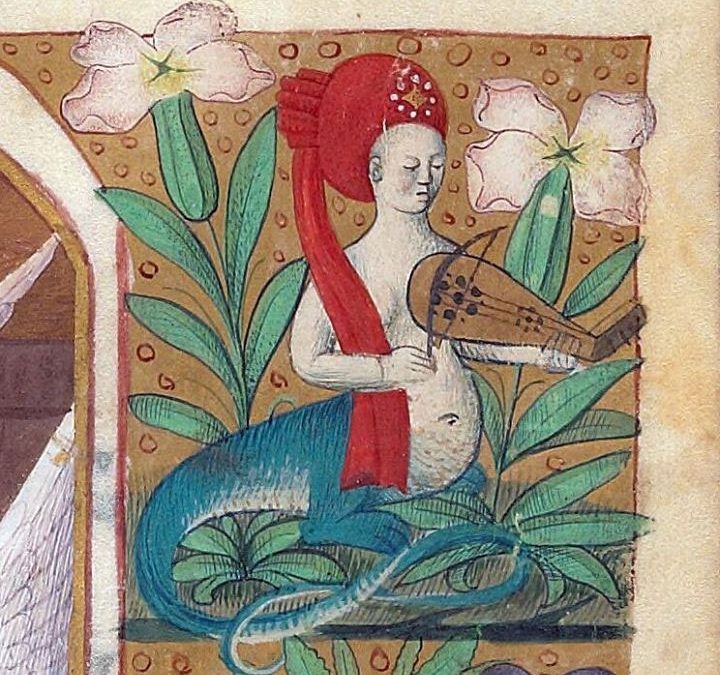 In the past few weeks I’ve been very much engaged with the French legend of Melusine, which we’re exploring in the Threads workshop series this year. The story has haunted me for over a decade. Back in 2002, after writing How to Ride a Dragon, I became fascinated by Melusine and began to translate the 14th century Old English texts that I found on line. Since then some very good translations have come out, especially those by Matthew Morris, who has brought the story to light with many rich details.

Melusine, as you may know, was half fairy and half mortal. Her mother, Pressine, was one of the fairies who were sometimes seen at the wells in the country of Albany (now Scotland) and her father was a mortal Scottish King named Elynas. He had been hunting one day when he happened upon Pressine who was singing by a well. He was instantly transported by her voice, and I’ve often wondered what the fairy was singing that so enchanted the king. Her song carried him out of time and delivered him far away from his worldly concerns and the recent death of his wife. It wasn’t long before he asked the fairy for her hand in marriage, and she consented, but only on the condition that he not intrude upon her when she was bathing her children. He agreed, and they married soon after. Pressine gave birth to triplets and named the firstborn Melusine.

Due to some mischief on the part of Elynas’s son, the king unwittingly breached the condition of his marriage. He burst in on Pressine with her newborn babies and she could do nothing but gather them up and return to the “Lost Isle” of Avalon.

Every morning Pressine took her daughters up the flowering mountain that overlooked the country of Albany. From that high perch, she could see King Elynas come and go, and the sight of him made her weep. Her daughters witnessed their mother’s sorrow, and on her fifteenth birthday, Melusine demanded to know exactly what the king he had done to cause her mother so much grief. When she learned the story, Melusine decided to punish her father. She and her sisters used their powerful spells to imprison King Elynas in a mountain.

If they thought their mother would be pleased, the sisters were sorely mistaken. Pressine was furious. She told her daughters that they had taken from her every remaining mortal pleasure. As punishment, she exiled them from Avalon and sent them into the world, each with a fate. Melusine’s fate was a weekly metamorphosis. Every Saturday, she had to retreat to the waters of her bath because the lower half of her body would turn into a serpent’s tail. She could only marry a man who would agree not to intrude upon her at that time and never try to understand her secret.

Melusine found such a man in Count Raymond of Poitiers, a young and handsome fellow who came one night to the well in the forest where Melusine was with her companions. The well was a sacred place known as the Fountain of Thirst, where water poured from the high rocks into a clear pool. Raymond’s horse lurched out of the woods with his rider slumped on his back. Raymond was delirious with grief and only half-conscious, for only hours before, he had killed his beloved uncle.

It had been an accident. They were defending themselves against a charging boar, and the tip of Raymond’s blade had broken and flown into his uncle’s belly. He had died instantly. Raymond blamed himself and cried out to the stars that he belonged “in the darkest pit of hell!” When he could do nothing more for his uncle, he got on this horse and let the horse take him wherever he would. 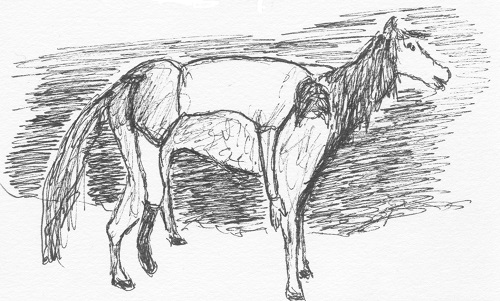 Melusine shook the bridle and woke Raymond from his stupor. She knew all about what had happened without needing to hear it. She told Raymond that she was a good Catholic woman, describing herself as “She who is next to God.” She promised to save Raymond from punishment if he would allow himself to be instructed by her. She told him exactly what he needed to do, and Raymond took her advice, trusting her implicitly. He willingly agreed to the condition that he never intrude upon her on a Saturday. They held the wedding festivities in the meadow near the Fountain, claimed the land, and called it Lusignan. Melusine, working her magic, built a great fortress on that site.

Soon she began to have children, strange children, boys, all of them, with disfigured faces. Some of them seemed quite monstrous, and yet they possessed extraordinary gifts. One had only one eye, another had a boar’s tooth. One had a lion’s claw jutting from a birthmark on his cheek, and another had pendulous ears. Melusine loved them all and built castles, towns, monasteries and cathedrals for each of them. The people of the country forgave the strange marks on the sons of Melusine because she was so wise, benevolent, and generous. However, Melusine herself could not accept her eighth son. She called him Horrible. He had not even been weaned before he killed two of his wet-nurses by infecting their nipples, and he had to be put in a cage.

Some time later, Raymond’s brother came to visit. It was Saturday, and at supper, Melusine was not present. Raymond’s brother asked about why Melusine wasn’t joining them at the table. Didn’t Raymond ever wonder what she was doing on Saturdays? “People say that she is cavorting with the fairies,” he said. “Or worse, having relations with demons.

Raymond leapt from the table, outraged by the rumors. He left the hall in a fury, took his sword and rushed to Melusine’s secret place. He thrust his weapon into the keyhole, twisted it to widen the hole, and peered through. He saw his wife in the bath. From the belly down, she had an enormous serpent’s tale, wide as a barrel and fifteen feet long. Raymond was alarmed—not by what he saw, but by what he had done. He found wax and filled the keyhole, but he could not repair the trust he had broken. He went down to the feasting hall and ordered his brother to leave the castle and never come back. Then he retired to his room and lay in bed, weeping. When Melusine entered in the early hours of the morning she saw the trail of salt that ran from his eyes. “Are you ailing, my lord?” she asked. He answered: “I have been somewhat ill.” She knew full well what he had done but she clasped his hand under the covers and said: “Be comforted, Raymond. For I am sure that, if it pleases God, you shall soon be whole.”

They lay together in silence.

Time went on. They never spoke of the transgression, yet doubt had been seeded in Raymond’s mind. Who was Melusine who called herself a good Catholic and went so far as to say she was next to God? Where did she get her magical powers to summon builders and raise castles and cathedrals for her sons? She had made Raymond a great lord as she had promised. She had saved him from suffering the punishment that was due to him for killing his uncle. How could he doubt her, his beloved wife and savior? 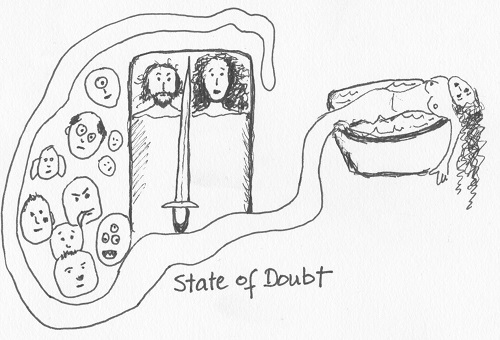 Then tragedy occurred in the family. Geoffrey, the son with the boar’s tooth, could not tolerate that his younger brother Froymond wanted to be a monk. Geoffrey despised the monks and all their hypocrisies. He rode to the monastery during the middle of Froymand’s ordination, bolted the doors and burnt the place down with his brother and a hundred monks inside. When Raymond heard the news, he could no longer contain his doubts. It was all the fault of Melusine! Three days later, she came to meet him at Mervent and Raymond openly accused her of being a demoness, a serpent. That was the final blow. Melusine swooned and fell to the floor, hitting her head on the stones. It appeared that she had died, but she regained consciousness, and told Raymond she could no longer remain on the earth. Raymond, now full of remorse, begged her to stay, “for the love the Goddess!” But already she was changing. She leapt onto the windowsill and delivered her parting words to the gathering, all the while turning into a form she could no longer conceal, a dragon with wings and a serpent’s tail. She leapt off the window and flew over the fields of Lusignan, crying in such a heart-rending voice that she seemed to bring the sky down. “People will forget the joy and the wealth that the Goddess has given them!” Raymond wailed.

Melusine’s story ends there. Caught somewhere between heaven and earth, she remains a goddess unredeemed. Her story, written in the late 1300s, foreshadows the witch burnings in Europe during the sixteenth and seventeenth centuries, and the profound submergence of the feminine spirit.

What is one to make of her haunting tale? Who was Melusine? She gave birth to monsters, did she not? How could one who claimed to stand next to God be so mortally flawed and cursed?

My question summons an image. I see Melusine standing at the window, scales appearing on her legs, wings sprouting on her arms. She can’t hold back who she is anymore. Her nature has to be revealed and accepted, just as we have to accept the monstrous parts of ourselves if we are ever to stop turning others into demons. To be mortal is to be flawed, fated, sidelined by unpredictable losses and disappointments. But those, like Pressine, who are not mortal know how precious it is to be here, and how far we humans can grow into wisdom.

I look forward to the days ahead, to see what each person in the workshop finds in the story of Melusine. We are a very vibrant and artistic group and each is looking at a different adventure in the story. What perspectives will emerge, I wonder? What might we find in the myth to draw us nearer to the Old Goddess and help repair the ancient bond between heaven and earth?