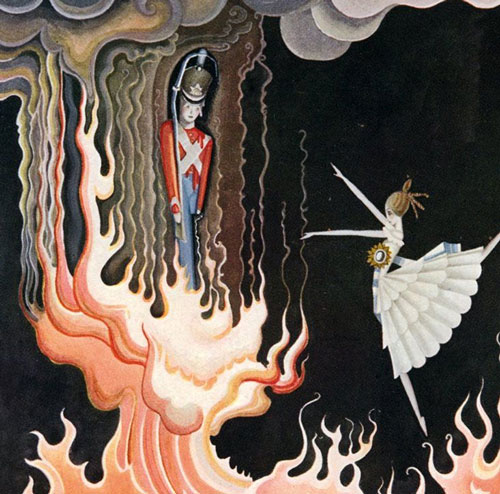 Early this morning I woke thinking about the steadfast tin soldier. He often comes to me at Christmas time, that noble fellow who has lost a leg in the manufacturing process. The boys who play on the floor with the soldiers don’t use the one-legged soldier, so he’s left to lie on the shelf. On the shelf there’s a paper castle, and in front of the castle a pretty paper ballerina pirouettes every time a breeze comes through the room. The tin soldier falls in love with it her. It’s not just because she wears a fluffy gauze tutu, a blue ribbon and a big silver spangle. It’s because, like him, she’s only got one leg to stand on.

This morning I thought about the tin soldier in relation to disability. Not just someone’s physical disability or mental disability but the disabilities we all have. I think about the phrase “I haven’t got a leg to stand on,” meaning one doesn’t have the proper support for one’s argument. Neither the tin soldier nor the paper dancer had the proper kind of support and so they were subject to having all sorts of tricks played on them, especially by the wind who blew the tin soldier out the window and ultimately blew the pair of them into the fire.

It has always seemed to be such a tragic story. Where does love get them, you might wonder. But when I thought about it this morning as I was waking, I realized where love had taken them. It took them beyond themselves. When the housekeeper found their remains in the fireplace the next morning, they had melded together in the shape of a heart. And who knows what sort of story the heart would tell after she fell into the servant’s apron pocket.

Love takes us beyond ourselves. It takes us to some place beyond our disabilities. I’ve needed to think about that this Christmas. The isolation and hardship that people are experiencing at this time has amplified my own disabling wound of isolation. The brave and the resilient among us are saying, “make the best of it,” “look for the silver lining,’ and that’s all well and good but we know what it’s like to have an ache in your heart that just won’t stop. It’s pulling you to some place, and if you don’t go there, you’re just going to go into battle with your heart. You might try to crush it like those statues of the Virgin Mary with her foot on the snake, or you might allow it to take you into a quiet place. Or you might just get taken straight to the suffering. Of course nobody wants you to go there. Who knows what old ghosts you’ll unleash or how long you’ll be trapped in the gloom. At the very least you risk wrecking the holidays for everyone.

The tin soldier wanted to show me something in that halfway place between sleep and waking. He wanted to show me a way through to the other side of the disabling wounds. He wanted to say, “Look at the power of love. By the power of love you can see through anything, including your own pain and grief. Love doesn’t say, ‘Here, look, here’s how you get rid of the pain. You shove it in a box and you never look at it. You call it your enemy and you keep it tightly locked down.’ Maybe, if it’s a matter of survival, you might have to shut the grief down temporarily, but love is not going to deny it. Love is not going to keep the kid in the basement. Love is going to listen. Love is going to say, ‘Yes, I see where you are and I see what you’re missing. Let’s find a way for you to experience what you love. Within all the constraints and limits of the world, let’s find a way. And maybe you will need to melt to everything else but the thing you love. Maybe your entire shape will change as you do. But in the end you will have made something out of your love.'”

I heard a sweet story a little while ago about a little girl named Meena Kumar. At nine months old she was abandoned and found on a college campus in Pune, India. Her rescuers took her to the local orphanage and a year later she was adopted by a family in Mumbai. As a little girl she cared for puppies and absolutely loved dogs. Then her family moved to Silicon Valley in California. One day she heard about a dog rescue operation called Muttville Senior Dog Rescue. She learned that many older dogs could not be adopted, and Meena wanted to help those dogs. She wanted to find them loving homes, just as a loving home had been found for her. She went to Muttville and asked to volunteer, but she was denied because she was only 12. She needed to be 17 to volunteer.

So Meena decided to offer a pet sitting service. She called her new business, “Pet Fairy Services,” and donated a portion of her earnings to Muttville. Working for $35 dollars an hour, she raised $7,000 for the organization. When she was asked why she cared so much for senior dogs, Meena said: “They need our love more than ever.”

Now there’s a little girl who has fished her heart out of the fire.

← Latest Flight of the Broad Mind! The Falcon's Cry →