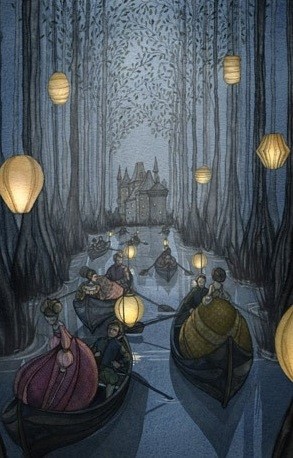 Sometimes I think that only a small part of life is represented in the fairy tale, and the rest of the story takes place in the world after death. Sometimes the story goes in and out of life. In the Grimms’ story, The True Bride, we find a girl toiling to please her stepmother, but she will never win her approval—not even with the assistance of a magical godmother who helps her to build a fantastic castle.

At last the stepmother dies by falling down the cellar steps, and that’s when it seems the worst is over, and the girl can enter the afterlife of the castle her efforts have made. She meets her soulmate and they sit together under an old lime-tree in her heavenly garden. It’s a perfect moment, and of course they will marry, but he hasn’t quite given up his own need for worldly recognition. He must go and ask for his father’s blessing. It won’t take long, he promises. He’ll be back in a matter of hours. She plants a kiss on his left cheek and tells him not to forget that kiss, that one spot on his cheek.

He doesn’t return. She waits and waits, and at last, she gets up and goes to pack a small bag. She leaves her castle, taking three jeweled dresses from her cache of riches, and goes off into the world to become a herdswoman.

Back to life I see her go, born again in a different guise, living a different life. She’s no longer seeking to please an unpleasable outer authority. She’s seeking the one she loves. She’s a person who is after her own person, a woman trying to find her mind and heart. She’s May Sarton writing her Journal of A Solitude, Susan Sontag writing to create herself—she’s me, and a thousand other people I know who are examining their lives and seeking to do something they truly love at the risk of losing every worldly thing.

She finds him but he doesn’t recognize her. He’s about to marry another, the one the fairy tales call the “false bride.” He’s forgotten himself in the physical world. He’s seeking fortune and recognition. He has lost the thread of his path, the knowledge of his soul’s delight.

She puts on a gown of golden suns and enters a community dance. He sees what he has loved and lost in the physical world. He must at least flirt with her. Perhaps he can have a dance, but one thing will inevitably lead to another and he will have to forgo the false bride, admit his duplicity, and take the hand of the one who speaks to his soul.

She appears to be no more than a herdswoman, an ordinary person who is perhaps much plainer than he would wish, who likes to do things he abhors or fears. Beyond the shadow puppet play of the world, she’s a princess who lives in a magnificent castle made by her devotion and all the magic that comes to those who tend to real things, however invisible, over lifetimes.

The couple makes a great return to the afterlife. The horses spirit them away “as if the wind had been harnassed to the carriage.” The illuminated windows of the palace shine in the distance. When they drive past the lime-tree, glow-worms swarm around it and the tree shakes its branches, releasing the blossoms’ fragrant kiss. Flowers on the steps bloom and strange birds sing.

And so we come and go, making castles…