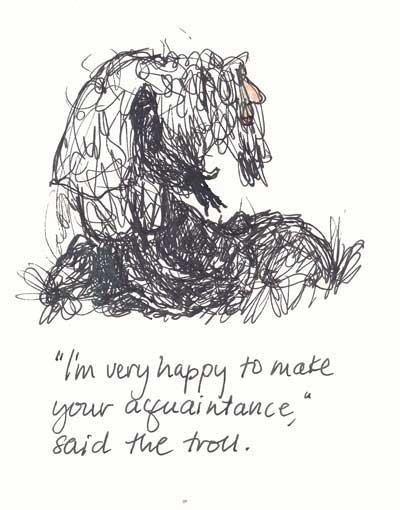 Lately, I’ve been drawing. I used to say I can’t draw my way  out of a paper bag, but I draw anyway, whether or not I deem myself worthy, because something in me wants to draw what can’t be expressed through words. The drawings often come out of scribbles, especially if I’m writing with a pen. Suddenly there will be this flurry of lines and in the lines I’ll see shapes, and I’ll start carving out the shapes, sculpting the face or the image that I see in them. It’s often a character that I’ve encountered in a story, or something that wants to speak to me. I have no idea what to do with it, but that’s not the point. The point is the process itself, letting the drawing out.

The analytical, left side of my brain is always astonished by these creations, just as it has been astonished by the gnomes and fairies I’ve sculpted over the years. The gnomes arrived when I started dealing with fibromyalgia and chronic pain. After a while I had made so many that they literally surrounded me with their funny little faces and happy attitudes. I once said to a friend, “I think I’ve lost my sense of humour,” and she laughed and looked at all the gnomes on the coffee table. “No you haven’t,” she said. “They’re all around you!”

The gnomes came out of a package of Model Magic. I bought a few packages to send as Christmas gifts, but I wanted to feel the substance for myself. The moment my fingers felt the lightweight marshmallow texture of the clay, they started flying all over it with an intelligence all their own.

All I had to do was greet the characters without judgement, and take delight in their faults and deformities. As they themselves seemed to announce, a big nose signified a certain type of character, a good sniiffer, for example — a guy who could pick up the scent of the trail. Big feet were the marks of a sturdy character; big ears, of a deep listener, and so on. The gnomes had no wish to be marketed. They didn’t appear for that purpose. The process of drawing them out of the clay was the point of their existence if they had to have a point at all.

I appear to be making gnomes all over again — this time, with lines on the page. Lately, I drew a character out who seemed to be bouncing a ball of yarn. The little person reminded me of the witch in the Aboriginal story Ball Carrier and the Bad One, who is feared, though she is a good witch. She rolls her ball into a group of children, and one child will follow it back to her. She’s been trying to initiate young people because she’s looking for the one person who will be able to “carry the ball” and go and meet the “Bad One” who lives on the other side of the river. Her initiation involves fasting long enough to fill the fasting person with good spirits. The more physical discomfort one can endure, the more able the person becomes to hold the good spirits necessary for meeting bad things in life.

The story speaks to me. Chronic physical pain is an intense endurance test. It tests one’s response to bad things. I fail miserably, over and over again. Usually it’s because I get overcome by disappointed hopes and expectations. I never know what my body will allow me to do, and no matter how hard I work at physical therapy, I can’t control the levels of pain in my body. Pain comes and goes, but lives with me every day. It’s noise in the body. I could characterize it, but I’m not sure I want to. It’s the one personality that doesn’t have a name. I don’t want to call it “the bad one,” either. It just is. I have some control over my response to it, but I often fail. I fall into despondency.

The best thing I can do is to summon the good spirits to help me meet my failures with compassion. The good spirits come to me through the arts, both in the process of doing the art, and in the odd results that stand on the counter or twinkle out at me from the page. All the little spirits say the same thing. Nobody can see us as well as we see ourselves, no matter how much they love us, and no love can convince us of our worthiness better than we can. When we meet our failures with love, we push back on the convictions (which are really the bad ones) that we’re good for nothing because we failed to pass muster.

I don’t know where the “bad ones” come from, but in the fairy tale, they hoard gold. It’s kind of ironic that the high standards of the genius can drain the creative impulse that is the very life’s blood of the artist. I am quite sure that we all have stories about when we stopped doing the artistic activities that came naturally to us as children. When the bad ones got the better of us, we stopped singing, dancing, or drawing.

I think I followed the witch back to her house, because I didn’t want the gold to be taken. So I carry the ball. Try to keep it loose. 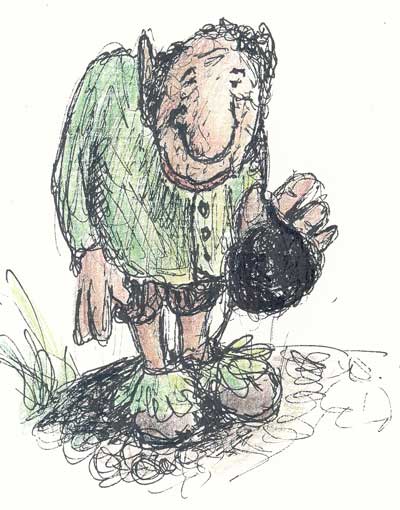