What is the knocking at the door in the night?
It’s somebody wants to do us harm.

No, no, it is the three strange angels.
Admit them, admit them.

D.H. Lawrence, “Song of a Man Who Has Come Through”

I have been thinking a lot about inclusion lately. I would say that few people suffer exclusion more painfully than those with intellectual differences, like my sister. From the time she was born, eight years after me, I have watched her having to live on the sidelines. She didn’t attend regular school or enjoy sleepovers with girlfriends. She lived in her own world, tried to make sense of her reality, and struggled with the labels “disability,” “handicapped,” and, worst of all, “retarded.” For a long time I have felt that her exclusion is not her disability but the intellectual disability of our entire community. I was deeply impressed with the Canadian Association for Community Living, when, in 1985, they made the brave decision to change their name from the Canadian Association for Retarded Children to the Canadian Association for Community Living. They understood that in order for people with intellectual differences to feel at home in the community, the community had to change.

Over the years, my longstanding question has been, How we get to real inclusion? Inclusion and exclusion have become a national issue as people who have been driven from their countries seek new homes in distant places. South of the border, there’s an effort to base immigration policy on who can best contribute to the Gross National Income. Are money-making people the only people who are worthy of inclusion?

What is our own internal immigration policy, I wonder. What parts of ourselves are we willing to include? Do we only give value to the “useful” parts, adaptations that are “tried and true,” ideas that can be monetized? How well do we listen to the inner selves who don’t fit in, who feel and think things that the ruling voices would deem disruptive, unprofitable or absurd?

As I was thinking along these lines, I realized that inclusion is the reason I get so fired up about giving voice to fairy tale characters. The stories open the door to a crowd of strangers—dwarves, dragons, griffins, mermaids—not to mention animals, trees, and human underdogs like the Little Match Girl and Jack in Jack and the Beanstalk. When we sink down into a story and look out at the world through the eyes of an feared or exiled character, we may be astonished to find our own selves speaking.

My friend Leslie Fell was certainly surprised when, in one of my writing workshops, she got in touch with the sea witch in Hans Christian Andersen’s story, The Sea Maid. Here’s what Leslie says:

“In the sea maid I discovered how I had silenced myself. Yet, there was another part within me which demanded that her voice be heard. When I began to speak from this part which I identified as the sea witch, I heard her fire, arrogance, anger, strength, independence and underlying grief. She was an all-consuming part of myself ready to chew and spit out any who seemed to come close to me (potential suiters beware!) or who I felt were telling me what to do. She was a no nonsense, no BS part of me—and yet she just wanted a voice! It surprised me to see that in her way, she was protecting me. She was shrieking “Leslie, you have something to say! Do not silence yourself!” She and parts within me became the catalyst to get me moving on heart-felt projects which I was procrastinating about doing. I love this inspirational part within me, encouraging me to live life more fully – to take risks, have a voice and make a stand.”

In my experience, the characters that we fear the most may be the most surprising of all. It took me some time to imagine myself into the bones of the giant in Jack and the Beanstalk (Scottish version, 1820). He was, after all, a man-eater, a murderer, and a colossal thief. But when I did finally assume his point of view, I discovered that the intimidating giant was nothing but a giant baby. He acted like a fussy two-year old. His wife was constantly pampering him but neither she nor his money, nor even the fairy’s harp could soothe him. I could easily see how one who has always been fussed over could become this “giant baby” and how, uncurbed, this baby could become a full-blown autocrat and “eat” everybody else. 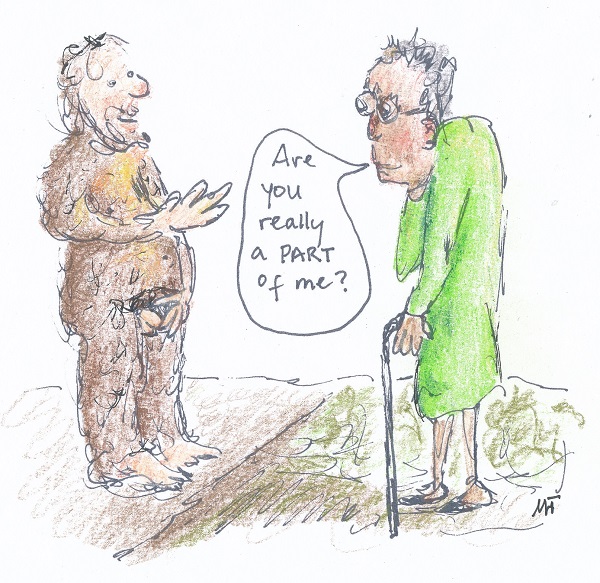 Generally, we don’t reach out to the excluded members of our inner community but I would say that the practice of going inward to meet the “others” can transform the way we respond to the “others” in the community around us. We start seeing who has been left out, listening to the voices of the voiceless people. As Toko-pa Turner suggests in her book, Belonging, the act of inner inclusion heals the longing and the hurt of not belonging. Reading her book, I couldn’t help but feel that we all belong to the group that feels they don’t belong. We are all outsiders to something until we bring our own outsiders in.

And what do we find when we open the door? Not strangers but familiars, not monsters but angels who come bearing new revelations and gifts. I’ll be telling a bit more of my story of meeting the “others” when I present “Saved by Rapunzel” at the Storytelling Festival in early March. Suffice to say that when we open the door, we may be amazed to find that those we keep outside our homes are bringing home to us.

Note of thanks: Thank you, Kristen R., a treasured Wonderlit subscriber, for pointing me to D. H. Lawrence for my opening words. And thanks, Les, for sharing your story! Illustration by Eleanor Fortescue-Brickdale (1872-1945) Cartoon by me.