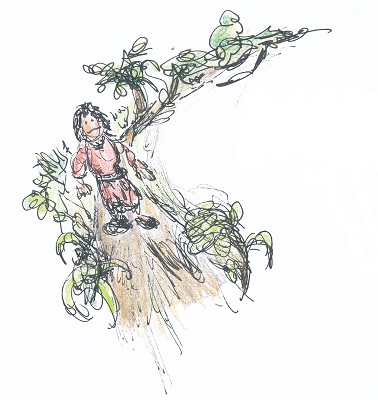 Recently I’ve been spending time with a Swedish fairy tale called A Tale of the Tontlawald. It’s about a girl named Elsa who grew up among the fairies in a place known as the Tontlawald. She drifted into that strange and forbidden territory one day when the abuse at home became intolerable. A wise fairy mother took her in and sent back a replica of the girl, a robotic doll that didn’t feel anything and could take the blows of her stepmother.

This story really speaks to me. All too often we find it necessary to escape the assaults of the world, however we experience them, in childhood or adulthood, at home, at work, or in public life. We find refuge somewhere within ourselves, and send a replica back to play the game of life. 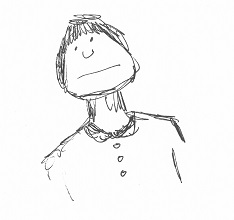 The replicant’s life takes many forms and some of them seem to work pretty well. If you don’t have your feelings in the game, it’s easier to win. I think about the Tin Man in this regard. He wasn’t always a tin man. He was once a woodcutter made of flesh and blood, but a witch kept enchanting his ax and cutting off his limbs. He went to the tinsmith for one limb after another until he became a man entirely made out of a tin. He had lost his heart but he didn’t miss it. He was proud of his strong, gleaming body. He could cut wood like nobody else, and as long as he had his oilcan nearby, he had nothing to fear.

Whatever form the real life replicant takes, it’s a shutdown state. And if we wake in this unfeeling state, and feel our numbness, the problem of coming back to ourselves can be terrifying.

There’s a story that on his eight birthday, the famous singing teacher Alfred Wolfsohn was asked by an uncle, “What do you want to be when you grow up, Alfred?” The little boy replied, “A human being, sir.” Indeed, Alfred would grow up to make becoming human a lifelong project. He fought in two world wars, and came out of the first world war with post traumatic stress disorder. Eventually he found an extraordinary way, through the voice, to meet the grief, guilt, and horror that assailed him.

What does it mean to become a human being? In his beautiful book, Becoming Human, Jean Vanier addresses that question. It’s the undertaking of us all, he writes. “It can be a long and sometimes painful process. It involves a growth to freedom, an opening up of our hearts to others, no longer hiding behind masks or behind the walls of fear and prejudice. It means discovering our common humanity.” (1)

Several decades ago. I resolved to confront my own numbness. Ironically I was suffering from chronic pain, and it was unearthing all sorts of old heartaches and hurts. I kept pushing them back, trying to be stronger than them, and faulting myself for my weakness. I had the option of popping more and more pills, or I could undertake a ‘pain management program.’ That meant learning how to live with pain, which really meant learning how to live with me. I wanted to get some understanding, if not of the physical pain, then of its emotional dimension. In addition to going to a pain clinic, I began a project of going back into my past to re-story my childhood experience. I had suffered a lot of hurts growing up. I came into adulthood with an in-sucking sadness that I was afraid to know, and a rage against life that all-too often erupted.

Nothing would infuriate me more than the suggestion by doctors or friends that the pain was “all in my head.” That response was not only profoundly unsympathetic but it also awoke a deep suspicion that nothing I experienced, not even my pain, was real or had any validity.

I decided to become a kind of guardian angel to myself. I would sit on the steps with my younger self and let her tell me her experience firsthand. As the child began to speak, I felt everything again, only this time with an adult’s understanding. I won’t say it didn’t cause me more grief because it did. As I told my mother at the time, I felt broken-hearted, broken-open-hearted. She didn’t know what to make of that. For a while, neither did I, and there were times I worried that I, like Humpty Dumpty, would never be able to put myself back together again.

It was around that time that I came into my own Tontlawald. Fairies literally did come to me. Gnomes, to be precise. I started to sculpt little people, mostly little men. Each had a personality and some sort of comforting philosophy to offer. The gnomes conveyed to me that they were Nobodies who came from Nowhere. They challenged the part of me that wanted to be a Somebody going Somewhere, and offered me the relief of just being here. Nowhere was my Tontlawald, where, as the gnomes would say, “Everybody is welcome, and the admission is free.”

When I made gnomes, pain was overwritten by delight. My heart was in it, and yet my mind was confused. I continually asked myself. “What’s the purpose of these guys? Do you plan to sell them? And if not, why are you wasting your time?”
The gnomes would say that they had no wish to be sold. They had no purpose at all, other than to give me what they merrily punned “dalight.”

Could I accept that?

Nothing in my culture, religion, or upbringing had taught me to receive love that came from nowhere and asked nothing from me. 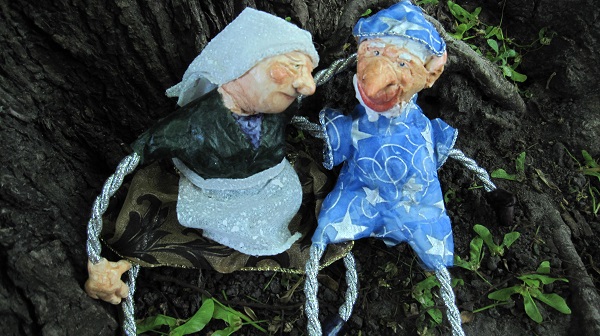 In the fairy tale, Elsa finds her way to the Tontawald when she and the other village children are in the forest picking strawberries. She is savoring the delights of the fruit as she follows the strawberry patch into the dark wood. Suddenly one of the boys cries out, “You’ve stepped into the Tontlawald! Come back!” Standing among the strawberries, she thinks, Why? Why should I back? Surely the strange, unknown people who live here can’t be more abusive to me than my stepmother!

In that moment, she makes a decision on her own behalf. She becomes a loving mother to herself. Why not open her heart to the strange people in the Tontalwald? She’s on a path of delight. Why not keep following it?

It’s amazing to me how strong the voice is that rails against taking direction from our own sources of self-care and love. There’s this big idea that presses in from all sides that such action is selfish, that it’s better to die for somebody else’s purpose than to live for your own.

I would say that the single most profound deficiency in human beings at this time is the deficiency of self-love. We are not taught to love ourselves. Erich Fromm made a powerful and resonating case for self-love in his book, The Art of Loving. There is a widespread belief, he wrote, that “it is virtuous to love others, but sinful to love oneself.” (53) The view goes all the way to John Calvin, who, in Institutes of the Christian Religion, speaks of self-love as a “pest.” (622)

The truly selfish person, writes Fromm, feels no pleasure in giving, only taking, and judges everyone and everything according to its usefulness to himself. On the other hand, those who work hard to be unselfish end up resentful and unhappy, feeling chronically unrewarded and puzzled about why they gave up so much for so little.

If you truly love, he writes, you cannot exclude yourself from the circle of those you love. You are as important as anyone else. Meister Eckhart put it this way: “If you love yourself, you love everybody else as you do yourself.” (quoted, Fromm, 58) And where have we heard that before? “Do unto others as you would have others do unto you,” presupposes that self-love is there in the first place. 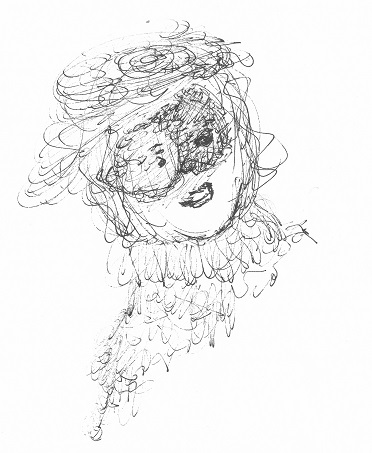 Standing in the strawberry patch, Elsa chooses a path that leads her away from abuse and towards something happier and more nourishing. She is soon approached by a young fairy woman named Kisika, a who takes her to her mother’s house, where Elsa is reparented by the gentle people. By their own example, the fairies give her a foundation of good conduct, generosity, compassion, gratitude, and imagination.

Eventually, Elsa grows up, and inevitably, she must return to the human world. It’s a terrifying prospect to go back into the harsh, coarse sphere of village life. She is no automaton. She’s a sensitive, feeling human being who will be wounded time and time again. But she will be gentle with herself while caring for others, and love will root itself like a strawberry patch, everywhere she goes.
Elsa will feed the world.

The scribbles and the sculptures are mine.

← Faith-Keeping Spelling the Spell OUT →