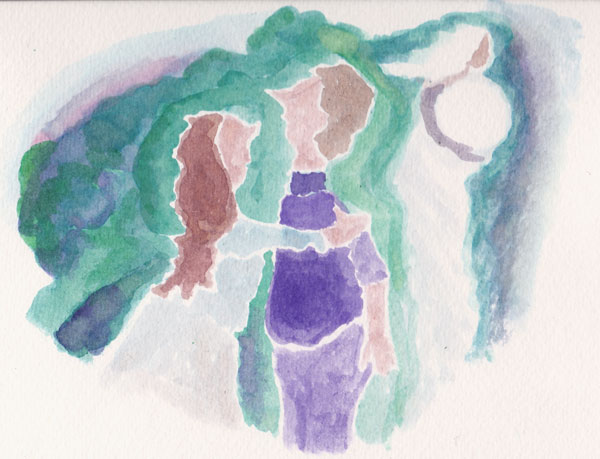 Never lose sight of your dreams, my darling!

Every now and then I have a crisis of faith. Faith in my art.

A few decades ago, when I realized that my life was probably not going to involve raising children, I was sitting outside on the porch of the little house I had rented in Toronto. It was a sunny day in June and I had just purchased a white plastic table and chairs. The sun was blazing off the white surface and I looked into the cloudless sky and experienced a moment of terror. I had left my marriage to start a new life. How would I possibly fill the empty space, spin a world from my tiny self? Staring out at all that emptiness, I felt like Walt Whtiman’s noiseless spider….

A NOISELESS, patient spider,
I mark’d, where, on a little promontory, it stood, isolated;
Mark’d how, to explore the vacant, vast surrounding,
It launch’d forth filament, filament, filament, out of itself;
Ever unreeling them—ever tirelessly speeding them.

And you, O my Soul, where you stand,
Surrounded, surrounded, in measureless oceans of space,
Ceaselessly musing, venturing, throwing,—seeking the spheres, to connect them;
Till the bridge you will need, be form’d—till the ductile anchor hold;
Till the gossamer thread you fling, catch somewhere, O my Soul.

Since that time, I have become accustomed to flinging my gossamer thread. Sometimes it catches, sometimes it doesn’t. I make my webs where it is possible. But all the writing and storytelling doesn’t eliminate the emptiness. It is always there. Some profound solitary confinement seems necessary for any truly artistic endeavor.

As one of my fairy godmother characters once told me, you have to turn the day lights down if you want to see what it appears in the dark. There is a threshold between day and night vision. You have to confront all the annihilating thoughts that you are wasting your time, that you have nothing to offer, that you are disappointing expectations and depriving others of the help that you might otherwise be able to provide.

Yet for those who have a longing to spin the thread that is inside them, faith in the art has to be summoned. And re-summoned. And summoned again and again!

There is a picture in fairy tale I’ve been walking with recently. It comes from the Grimm’s story, The Crystal Ball. I told the fairy tale at the Storytelling Festival recently, and we’ll be exploring it in the Spells workshop in June. It’s a picture of a princess who has been put under a spell. She appears as old woman, locked in a remote room in a castle far, far away, beyond any ordinary reach. However she is not completely overtaken by the spell of her appearances because she possesses a mirror. When she holds up the mirror and looks into it, she sees the image of her true face, her beauty “as I am in truth.” 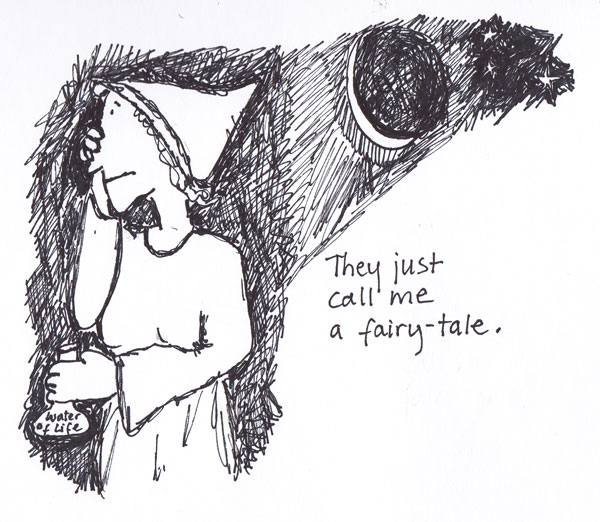 To me, this picture expresses the challenge of the artist in our world. What the artist sees is not apparent to others. Yet, if the artist does not believe in what she sees in the mirror, but instead looks to others to validate who she is, then the beauty that is in the mirror will never be seen in the world.

I once had a dream that I had gone with a friend to a writing workshop on the west coast. One night, after dinner, I found my friend in the kitchen doing the dishes. I asked her if she had written anything about the mermaid. A mermaid had been coming up to see her in the bay, which was astonishing to everyone in the workshop. Nobody else had seen the mermaid.

“No, I haven’t written anything,” she said. She didn’t want to be bothered by mermaids. She was concerned about the state of the world and the impending environmental crisis. That’s what she thought she should be writing about (though she was blocked.)
I got upset. I said, “If you don’t go and speak to the mermaid, then no one will ever know what the mermaid has to say, because she only comes up for you!”

Over the years I have considered that dream. I get why my friend didn’t want to visit the mermaid. She would have to put all her other outer-world concerns aside. She would have to believe in something that others do not see or deem valid. That requires a huge effort of faith, particularly during times of crisis when we are faced with the choice between the needs of the others and the demands of the artist.

I’ve heard it said many times that if you are really a writer, you can’t not write. It’s not a luxury. It’s a necessity, a cornerstone of your own sanity. I think that’s true, because over and over again I choose to speak to the mermaid instead of doing the obvious practical thing.

Why? Why do I listen to mermaids? Not to escape, surely. From the time I began dreaming, back in the mid 1980s, dreams and fairy tales have kept me from losing sight of myself in a world enchanted by the power of appearances.

I recently came back from a visit to Salt Spring Island in B.C. where I met with a friend named Toko-pa Turner who does dream work with her clients. We hadn’t been very long together before I told her my dream of the mermaid. Then she told me a dream of diving to the bottom of the sea and finding the mermaid’s eyes.

We need those eyes in this world, those feminine eyes, those eyes of the depths that Carl Jung himself groped for. They see inside the world. They recognize that the visible world is just the tip of the iceberg, and that under the surface, good souls live untold stories and confront inadmissible things. Those deep eyes are themselves crystal balls, breaking spells.
So the mermaid tells me.

So I keep the faith. 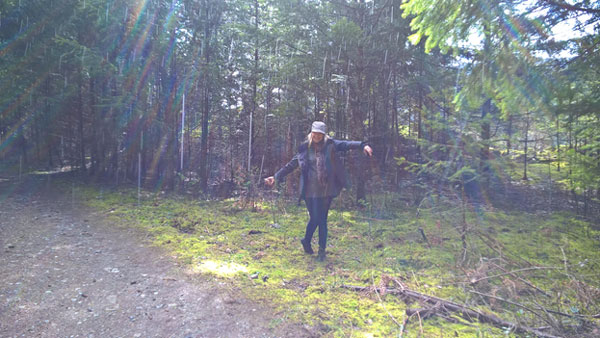 illustrations by yours truly

← Octopus Poetry Growing Back Up →