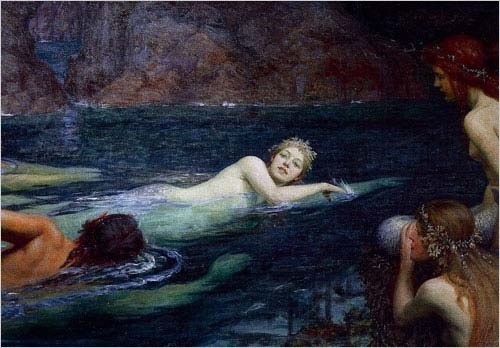 It almost sounds like a dirty word in this day and age. With all the problems that we’re facing in the world, why would anyone want to unplug, step back, and stop running after whatever it is we’re running for?

I once had this dream that I’d gone to a writing workshop with a friend, and she wasn’t doing any writing. Instead, she worked in the kitchen, and while everybody else was off writing, she did the dishes. I happened to know, however, that a mermaid was coming up in the bay to speak to her. I went into the kitchen and I said, “Did you go out to see the mermaid today?” She didn’t want to talk about it. She had far too many real world concerns to be off conversing with mythical creatures.

I felt like I was going to weep, and I said: “But you have to go! If you don’t go to hear what the mermaid has to say, nobody will ever hear from her, because she only comes up for you!”

My busy friend wasn’t prepared to disengage from the outer world to consult the voice of the depths, and, of course, I recognize that busy person in myself. I tend to think that the solution to any problem lies in worrying over the issue: editing and re-editing my work, for example, but the insights are more likely to come when I’ve unplugged, when I’m walking in the park or sitting by the water.

Every fairy tale character has to leave something at the beginning of the story—otherwise, there wouldn’t be a story. Some, like the steadfast tin soldier who falls out of the window, are thrust out of their familiar environments by circumstances beyond their control. Others make a conscious decision to depart. The handless maiden has probably thought about leaving home for some time. She practices her own ritual of drawing a white chalk circle around herself so that she can’t be snatched by the devil. By the time she leaves, she has already left psychologically, whereas the little tin soldier is going to struggle to come to terms with the violent way in which he was torn from his familiar surroundings.

Departures in literature can inform us about how to meet the ultimate necessity of leaving the world when we die. I do believe it’s very important to learn how to disengage, not only to minimize our own suffering, but also to minimize the suffering of the ones to whom we are attached. Contrary to what we might feel in the depths of despair, letting go is an act of love, and this point is sweetly illustrated in a little story from the Grimms called The Shroud. A mother who loses her child is so overwhelmed by grief that she can’t stop crying. One night the soul of her little boy comes to her wearing his wreath of flowers and his sodden shroud. “Oh, do stop crying, mother,” he says, “or I shall never fall asleep in my coffin, for my shroud will not dry.” The grieving mother dries her tears, and bears her grief “patiently,” letting her child sleep peacefully “in his little bed beneath the earth.”

One of the reasons I find it so hard to let go is that it sometimes feels like giving up, turning my back on what I love. My husband once said to me, “What would you be if you didn’t write?” I was floored. “What are you talking about?” I couldn’t even imagine not writing, and I actually got mad at him because I thought that he was saying that I shouldn’t be a writer, that I shouldn’t care so much about my subject. Even now, I teeter on the edge of a void when I consider who I would be if I didn’t have this subject to which I find myself so devoted. The reality is, however, that this too shall pass, and when it does, I will fall towards something which is even truer than what I think is real now.

It’s worth noting that there is a slight difference in the meanings of the words “detachment” and “disengagement.” Detachment denotes a separation, “aloofness from objects or circumstances,” whereas “disengagement” points to an “emotional withdrawal.” When we disengage, we step back to get a bigger view, divesting ourselves of the emotional attachments that prevent us from seeing a situation as it actually is. It seems to me that if we want to support our mental health and make wise choices, we need to disengage from the fiery planet from time to time. Bless our artistic spirits because art can flip the switch. The attention that one gives to an artistic subject is an act of conscious disengagement, and in that openness we are filled with new life. Emily Carr put it beautifully in her journals, when she was having to talk to herself to still her anxiety over the blank canvas.

“So, old girl, be still and let your soul herself find the thought and work upon it. She alone understands and can communicate with her sister out in nature. Let her do the work, and, restless workers, running hither and thither with your smelling, looking, feeling, tasting, hearing, sit still till your Queen directs but do not fall asleep while you wait—watch.”

I had a lovely vision the other morning when I was waking. I saw a tiny old man, a dwarf with a long white beard, resting on his back with stars all around him. He said, “Whenever I need to restore myself, I go and bathe in a pool of stars. When I rise, I’m completely refreshed. I have my memories, but I am not engaged in any of the old battles. I get up and meet the world anew. That’s our secret, you know. Dwarves live for thousands of years because when we get old, we bathe in a pool of stars!”