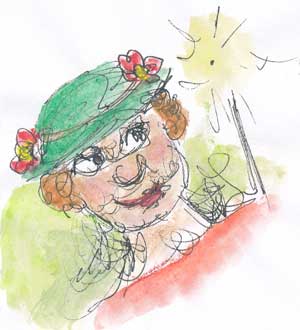 I was summoned to the assembly of fairies by Madame Selnozoura, who is a very old and distinguished fairy. I was told by her messenger that two young people drank the magic water and that Madame Selnozoura had discovered my secret.

The messenger gave me a magic ring and said that I could use it to undo half the spell. I must come to the assembly and decide which young person to restore.

They had very good arguments on both sides and I agreed with everyone. Then the crowd started shouting, and I got so dizzy that I finally cried out, “Cease and desist!”

Then I began my speech. “Happy is she who can repair the mess she has made. But happier is she who has never caused any mess in the first place.”

Nobody could disagree with that.

I turned to Cornichon. “If I can only undo half the mischief, I would restore you to your youth.” The fairies cheered.

“OR…” I said, turning to Toupette, “I could restore your beauty.”

“I will do both,” I explained. “And I will do neither. Oh, I would never be so cruel as to leave one of you to decay while the other enjoys the beauty and power of your youth. So, because I cannot restore both of you, one half of each your bodies shall become young again, while the other half decays. I will leave it to you to decide which half it will be. I might draw a line around the waist, or draw a line down the middle of your body. You decide.”

I was very pleased with myself, but Cornichon and Toupette shook with rage, and the crowd broke into jeers and laughter.

Then the old fairy Selnozoura stepped forward, and she said: “Do you not think that it would be better to let them take turns to enjoy their former youth and beauty? Give them a fixed time, time, Dindonette. You could easily manage that.”

That was an excellent notion, even better than mine! “Which one of you shall I touch first?” I asked.

“Touch her,” said Cornichon. “I know her heart. I don’t fear any change in her feelings for me.”

I bent forward and touched Toupette with my magic ring. Ping! The old woman became a girl again. She stood up, twirled around, and the whole court wept with joy. Cornichon fell out if his chair in surprise, and Toupette helped him to his feet. She promised to pay him long visits and tell him of all her balls and water parties, and then she skipped away.

Now the wizard Kristopo stood and began his farewell speech. But I broke into the middle of it because I realized that I had forgotten to fix the time when Toupette’s turn would end. “How stupid of me!” I cried. “And I’m afraid it’s too late, for it needed to be spoken before I touched her with the ring! Oh, dear, why didn’t anybody warn me?”

“You were too quick, once again,” said Madame Selnozoura.

Cornichon was wheeled away, and the assembly broke up. Everybody was confused.

I went back home and I put away my magic wand. I wasn’t ready to have an island put under my charge. I wasn’t even ready to take care of a human being. Maybe I should just start by looking after a cat, or maybe a bird, or a maybe just a little mouse… hhhmn. 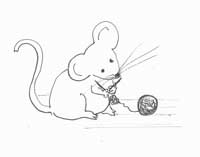 A week passed and then I received an invitation to Toupette’s wedding at the palace of Madame Selnozoura.

When I came into the hall, it was decorated with the sweetest flowers. Toupette was standing at the front of the assembly, holding a bouquet of pink roses, and waiting for the bridegroom to show up.

Madame Selnozoura and the wizard Kristopo were standing there, glittering in their finery. It didn’t seem that anybody knew who the groom would be, including the bride.

But no, Cornichon was wheeled in, drooling and smiling at the happy crowd with the foolishness of extreme old age.

“Bring him here,” said Kristopo. Then he stepped forward and touched the old man three times with his ring. Suddenly Cornichon was young again, and he sprang out his chair, amazed at himself.

The wizard embraced him. “May you live long,” he said. “Enjoy happiness with your wife, and love your old father, who it turns out, is me.”

After the wedding I was informed that Kristopo had discovered that Cornichon was his own son. That by itself wasn’t too surprising. Kristopo had many affairs. But he could not bear to see the suffering of his own son, so he went to the high court to ask for the power to restore Cornichon to his youth. Since the eminent wizard had served faithfully for so many hundreds of years, the high court granted him a boon and gave him a magic ring.

The wedding party went on for weeks, and everybody was happy, but nobody could possibly have been happier than me. My troubles were over, and I went around, waving my ring, and telling everybody what me and Kristopo had done!

Moral of the Story (if there could possibly be one): Fairies live long, but they learn VERY slowly! 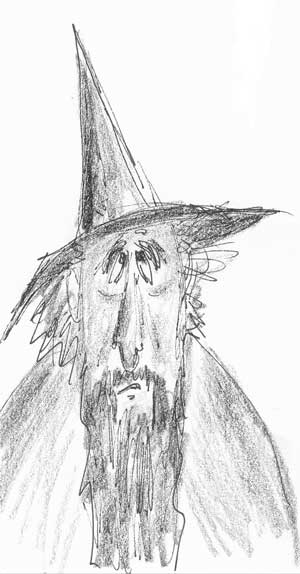 ← Unscrewing the Screw Up The Story of the Executioner →