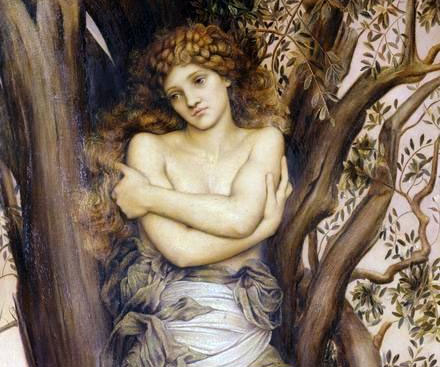 In Metamorphosis, the Roman poet Ovid tells a story about a man named Erysichthon whose exploitive behavior leads to a harrowing end. At the same time, he has a daughter who offers a very different way of thinking about humanity’s relationship with the natural world. Here’s how the story goes:

There once stood a giant oak so ancient and glorious that it had become a grove unto itself. The tree belonged to the goddess Ceres and the people had girdled it with garlands, ribbons, and votive tables. It was the habitat of tree spirits, and the dryads would often join hands and dance around the venerable tree.

One day, a wealthy landowner named Erysichthon ordered a slave to cut the oak down. When the man hesitated to swing his axe, Erysichthon said, “Even if this were not just the tree that Ceres loves but the Goddess herself, its leafy crown would touch the ground!” He grabbed the axe and struck the shuddering tree. Blood streamed from the gash but Erysichthon paid it no heed. He turned to his slave and said: “Take this reward for your religious bent,” and he severed the man’s head. Then he struck the oak repeatedly, ignoring the voice deep from within the wood that cried: “Beneath the surface of this tree I dwell, a nymph of Ceres, dying … I foresee your punishment at hand!”

The great tree fell. Weeping, the dryad sisters went to Ceres, and the Goddess devised a punishment. She would bring the spirit of Famine to this man. She could not, in her abundance, approach Famine, so she called upon a mountain nymph. She instructed her to go to the northernmost reaches of Scythia, to a place where the soil was barren. “Sluggish Frigidity inhabits it,” said the Goddess, “with Pallor, Shivering, and Famine too; command this last one to conceal itself in the belly of that sacrilegious rogue…”

The nymph rode off in a chariot drawn by dragons, and she flew until she came to a forbidding peak in the Caucasus. She unyoked her steeds and approached Famine who was picking stray grasses in a field of stones. Famine’s hair was unkempt and matted, her lips were grey and her eyes were hollow. Her skin clung so tightly to her bones that you could see her viscera. The mountain nymph wasted no time giving Famine the orders of Ceres. Even so she was famished when she leapt back into her chariot and turned the dragons to Thessaly.

Famine came to Erysichthon’s house in the middle of the night when he was deep in slumber. She wrapped her arms around him and breathed her essence into him. She blew on his lips, his throat, and his chest until hunger circulated through his veins. Then she fled the flourishing world and returned to her empty caves on the barren mountain. 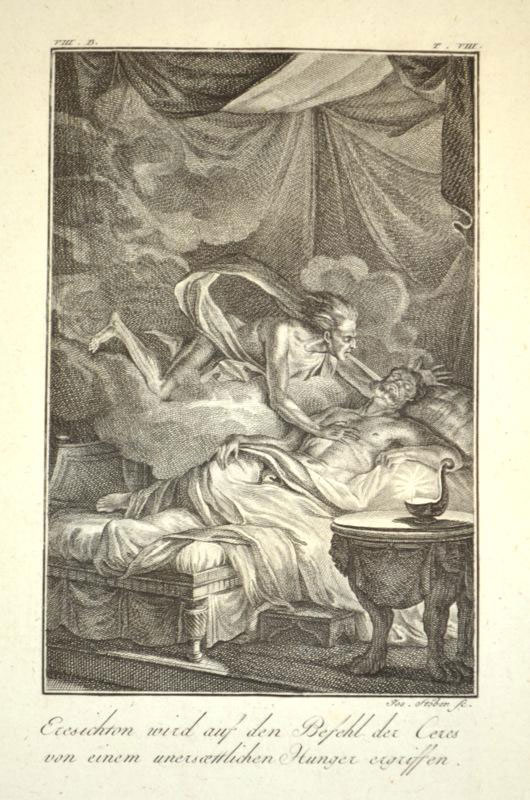 Erysichthon began dreaming imaginary feasts. He opened his mouth and gobbled nothingness. He ground his teeth and swallowed, feasting on empty air.

When he woke he was desperate for food. He gobbled everything on the table and still he groaned with hunger. What would be fit for a city gave him no satisfaction. He could not fill the emptiness. He sold all his estates to fill his bottomless hunger but still “the fire in his gullet raged full blast,” devouring all his wealth and property he had until he had nothing left. Only his daughter Mestra. And what did he do? He sold her as a slave.

The noble girl would not allow herself to be possessed and she soon escaped the slave master. She ran down to the sea to pray to Neptune. Neptune had loved her. In fact, he had taken her virginity, and now he answered her prayers. He turned Mestra into the shape of a fisherman. When the slave master came down to the beach looking for her, he asked the fisherman if he had seen a girl “dressed like a slave with unkempt hair.” The fisherman swore that he hadn’t seen a soul on the shore except for himself, and “no one that you might call a girl.”

The man left the beach confused because the girl’s footsteps led straight to where the fisherman stood. When he was gone, Mestra changed back into her true form, but her father saw what she had done. He marched down to the beach and seized her. Once again he sold her. “He sold her to master after master,” Ovid writes, “and she, as mare, or bird, or cow, or deer, would slip away, dishonestly providing her greedy father with the food he craved.”

Nothing could satisfy Erysichthon’s hunger. He consumed everything that the repeated sales of his daughter brought him and still he craved for more. Finally, the wretched man began to “tear his limbs, mangling them in his maw,” and fed on his own body until he shrank away.

Erysichthon lived by a myth that the world belonged to him and that he had the right to do whatever he wanted with it. He didn’t hold anything sacred. He saw no value in nature other than what fed his desire. His story illustrates where that old myth leads. As Ronald Wright demonstrates in his book, A Short History of Progress, the inability to think beyond one’s own appetites will cause human beings to repeatedly consume all the resources available to them and to die as civilizations. “The reform that is needed is not anti-capitalist, anti-American, or even deep environmentalist,” he writes, “it is simply the transition from short-term to long-term thinking. From recklessness and excess to moderation….” (Wright, 131)

I wonder if there’s a myth that illustrates the “long-term thinking” he’s speaking about. My thoughts lead me back to Mestra, the daughter of Erysichthon. She seems to have a terrible fate. As long as her father’s hunger runs rampant, she has to keep running, changing her shapes in order to escape one master after another. Will she ever be able to come to rest, root herself in her own being?

Or has she has been rooted all along, so rooted in her soul that she can express herself in all the forms she takes?

That’s a powerful idea. Mestra moves through many shapes to escape the slavery of the master. She is like a river running through her father’s story and beyond it, a river that can’t be dammed or bordered, a free spirit who will never be caught. She prompts me to ask, “Who are we in all forms? What do we care for that persists beyond our lifetimes, that spans generations? What is the great work we’re doing on this earth?”

Long-term thinking is thinking beyond the span of one generation to the generations ahead — three, four, seven generations. It’s also broad thinking, expanding our minds into space, into a sympathetic connection with other beings and the experience of our non-human relations on this earth.

For that we need something more than thinking. We need imagination.