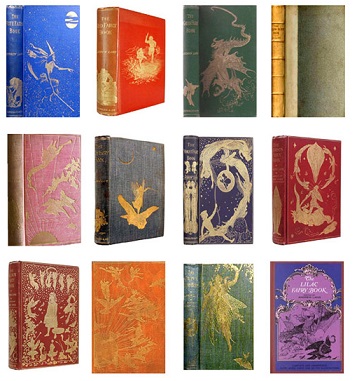 always had the impression that the stories in Andrew Lang’s colored fairy books were for children. He insisted that they were, and, in practically every preface of his twelve-book collection, he reiterates that their sole purpose is children’s amusement. Yet Lang was an ardent scholar of indigenous folklore and wrote prolifically on the subject. His books on native spiritual practices (Social Origins (1903), Magic and Religion (1901), and The Secret of the Totem (1905) influenced psychoanalysts like Freud and the prominent folklore and anthropological community of his day.

The more I read the tales in the fairy books, the more clear it becomes to me that Lang’s wife and all the other (mostly) women who did the adaptations were not laundering these stories for little innocents. The stories have spiritual depth, and they are also graphic and sometimes much more violent than one would expect from a children’s collection. In The Brown Fairy Book alone, you meet a young princess whose feet are cut off by a forest giant, a kindly old bear who is pushed into a pit of burning pitch, a turtle who threatens to cut a woman in half, and a seductive river Yara who nearly drives a man wild.

So I decided to delve a little deeper into the prefaces of Lang’s storybooks to see if I could glean anything more about his purpose in publishing the collection. When Lang began publishing the books in 1889, he was at odds with contemporary educators, who judged the traditional tales in his collection to be unreal, brutal, escapist, and harmful for young readers, while at the same time being unsuitable for mature audiences.

In the early prefaces, Lang is emphatic that he is offering the collection for no other purpose than the amusement of children. J.R.R. Tolkien, who saw great value in Lang’s books, objected to the way he consigned fairy stories to childhood. In his essay “On Fairy-Stories,” (1939) he wrote, “Fairy stories banished in this way, cut off from a full adult art, would in the end be ruined; indeed in so far as they have been so banished, they are ruined.”

Lang doesn’t acknowledge that there was ever an adult audience for fairy tales. Going all the way back to the beginning of time, he says, grannies were the tellers, and children, the listeners. In his preface to The Green Fairy Book, he says “…as the world became grown-up, the fairy tales which were not written down would have been quite forgotten but that the old grannies remembered them, and told them to little grandchildren; and when they, in their turn, became grannies, they remembered them, and told them also.”

Though Lang certainly understood the value of fairy tales for adults, he never acknowledges it, whereas Tolkien, writing few decades after Lang’s death, will wax eloquent…”Most good ‘fairy-stories’ are about the adventures of men in the Perilous Realm or upon its shadowy marches…” No can define what Perilous Realm is, he writes. Its definition depends on the nature of Faeries themselves and the “air that blows in that country.” The stories’ main purpose is magic, not one that has anything to do with science, but a magic that “must not be mocked” and can “neither be laughed at or explained away.”

In Lang’s day, the debate between science and religion was raging, and scholars in the human sciences were trying to establish a literal, empirical basis for every subject, from economics to psychology and religion. Stories that involved magic could not be given any validity by the serious folklorist. The President of the Folk Lore Society openly declared that fairy-stories were not “as true as the rest” of folklore. Lang himself seems caught in the problem of trying to argue that fairy tales are true. A long time ago, he suggests, ogres, witches and giants really did walk the planet, and old grandmothers remembered them. It’s doubtful he actually believes that, but he’s wary of presenting the stories as morality tales. He ends up acknowledging that they share a common teaching. “Courage, youth, beauty, kindness, have many trials, but they always win the battle; while witches, giants, unfriendly cruel people, are on the losing hand… no kind man, woman, or beast or bird, ever comes to anything but good in these oldest fables of the world. So far all the tales are true, and no further.”

Between the years 1889 and 1910, the colored fairy books made Lang famous. People were constantly asking him if he invented the stories out of his own head, and if he had written anything else except for fairy tales. It was extremely irritating to the prolific anthropological writer that people only acknowledged him as the writer of fairy stories which he in no way invented. It’s “the burden of an honour unto which I was not born,” he complains. “It weighs upon me and is killing me…” 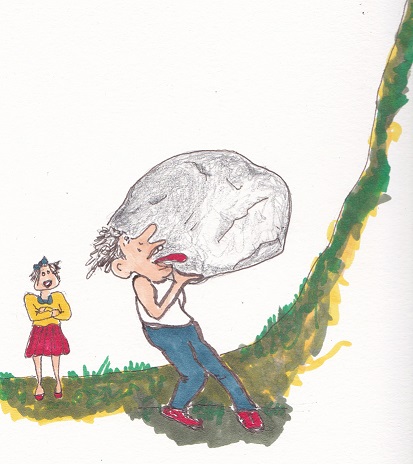 “He’s carrying the burden of an honor unto which he was not born.”

The thing that seems to bother him most is that, in his opinion, the fairy tale writers of his day completely underestimated the intelligence of children. Lang scorned the very idea that anyone could write a real fairy story. “…The three hundred and sixty-five authors who try to write new fairy tales are very tiresome. They always begin with a little boy or girl who goes out and meets the fairies of polyanthuses and gardenias and apple blossoms: ‘Flowers and fruits, and other winged things.’ These fairies try to be funny, and fail, or they try to preach, and succeed. Real fairies never preach or talk slang….Such are the new fairy stories. May we be preserved from all the sort of them!”

In spite of the efforts of J.R.R. Tolkien, Marie-Louis von Franz, Joseph Campbell, Patricia Travers, Walter Benjamin, Clarissa Pinkola Estes, and many other enlightened imaginations, the challenge of validating fairy tales continues to this day. The stories still suffer from being trivialized, mocked, and confined to the nursery. Then again, it takes a courageous heart to venture into the depths of the Perilous Realm. Tolkien understood that, and Lang preserved the stories well enough to ensure that the air from that mysterious country would continue to blow its magic to us.

← An Evolving Subject Back to Reality →