A View From Beyond Reason 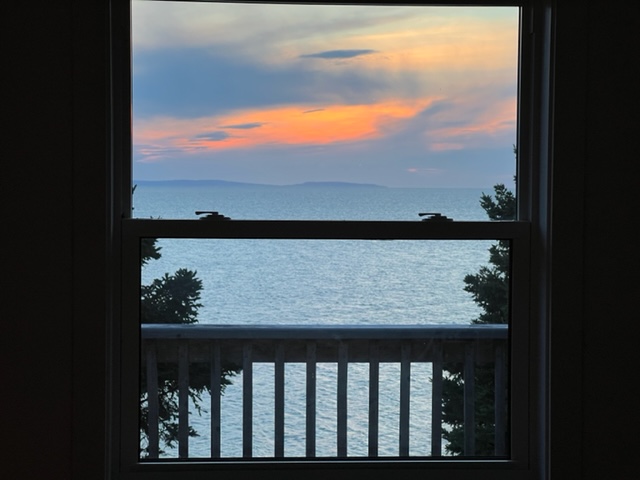 I’m sitting on a bench overlooking the sparkling sea off the western side of Cape Breton Island. It’s a deliciously quiet afternoon, a reprieve from the building project going on next door. The workmen have stopped. I hear the dull din of traffic from the highway and the chipping of a red squirrel who is still mad at us because we surprised him earlier, coming up the front steps. He dropped his blackberry prize and ran, chirping shrill admonitions.

I have just woken out of a hypnogogic state after listening to John Higgs reading his book, Blake vs the World. He was speaking about the poet William Blake’s experience of Eternity, a state that he was able to enter through the visionary power of his imagination. Blake fervently hoped that future generations would learn how to use imagination to step beyond reason and convention into an illumined place in the human mind. Alas, he was not well understood during his time. People couldn’t decipher his complex allegories, so he was left alone with his visions. Yet he was naming the energies of his psyche long before Carl Jung called them archetypes. And while he was in many ways, stubbornly battling his world, Higgs emphasizes that what he gave us was an invitation into the revelatory powers of the creative imagination. He left us with…

”…a responsibility to recognise the imaginative aspect of our lives and use it well. As Blake told us, how we see is as important as what we see, ‘For the Eye altering alters all.’ For Blake, there was a moral component to perception. As he wrote, ‘The tree which moves some to tears of joy is in the Eyes of others only a Green thing that stands in the way […] As a man is, So he Sees.’

In my early life I didn’t know myself well at all, but I did know that I didn’t want to see a tree as a green thing that stood in my way. I wanted some sort of entry into the meaning of the world and my purpose. In the early 1980s, I went to interview storyteller Joan Bodger for a freelance article I was writing for The Globe and Mail. I sat on a Persian carpet in her studio, and asked her what the old fairy tales meant to her, and why she felt they needed to be told and retold. She said, “I can’t tell you, but I can show you.” She proceeded to tell me a fragment of a story which took me into a place within a fairy mound. She described all sorts of things within that place, and then she stopped and asked me what I had seen. What would I remember and take away from that otherworld?

I rode the subway home with a disturbing, thrilling new awareness. I had gained entry to truths I would not have otherwise known or even asked to know. The image had located me in my life. It had captured my sense of fragmentation, suspension, and desire to escape the earth. I didn’t forget it, either. It kept giving me insights, and slowly turned me toward books about the power of myth and the meaning of fairy tales. I was deeply inspired by Joseph Campbell, P.L. Travers, and Marie-Louise von Franz, but I wanted something more than an analysis of the stories. I wanted an imaginative experience of meaning, and so I learned how to navigate the fairy tales. Four decades later, I have moved through many interior countries. I would never attempt to say what fairy tales mean, but I certainly can say what they have meant to me. And I have always been keen to know what they have meant to others. Each one of us sees differently when we step into a story, even if we go to the same place.

If, for example, we both venture into the woods of Hansel and Gretel, you will see one thing and I will see another.  Say we find ourselves looking at the witch’s candy house. Your witch’s house might be made of gingerbread, and mine might be made of hard candy. Your gingerbread might invoke notes of cinnamon and nutmeg, taking you back to memories of your grandmother’s kitchen, and also of the terrifying song, “Run, run, as fast as you can, you can’t catch me I’m the gingerbread man.” You may say that even then, you didn’t wish to be consumed, and there a bright-lit truth opens up to you. A memory is unearthed. Connected to the hub of a universal story, it holds the promise that you will find new freedom from the powers that consume you,

My hard candy house will lead me into another set of images. For me, the house is a lure. It brings me back to dark things. I was lured into a janitor’s closet by peppermint candies when I was a child, and so the witch’s house is that place. It threatens to hold me there, the way Hansel was held in the witch’s cage. But the story holds a thread and serves a purpose. It gives me a flint trail, lit by the moon, a path to the other side of witches’ country. I can fly around in the story. I can see from other points of view. And when I am ready, I can follow Hansel’s path. I can spring from the trap, gather the witch’s treasure, ride the mother duck to the other side of the lake. I can return home, and tell you the story through the eyes of the moon that has seen it all.

Who can know what we will see unless we go? No other eyes will be able to see for us. There are no other eyes but our own.

I have opened up many lands of my psyche with my imagination, and I am with Blake in the understanding that our creative imaginations, used intentionally, can unlock inner doors. We can illuminate our existence, and, if we’re brave enough, we can go to dark and broken places where Eternity blazes through the cracks in the walls.

If Imagination is not taken up as a liberating instrument, it is running somewhere else; often running wild. My own capacity for negative imagining has had a lot of exercise over the years. Chronic, mystifying, untreatable pain put a halter round my neck and led me, wild-eyed, to a reckoning. My fears, anxieties, furies, and griefs were nightmares bolting into hellish moors. They all had good reasons for terror. But.

I knew something. What did I know? Something unreasonable, incapable of making a case for itself.

Who knew? Someone without a voice or a name — someone beyond names, capable of being anyone.

That one, who lives in Eternity, imagines another way.

← Love in the Dark Tribute to the Queen →