A Most Grateful Man 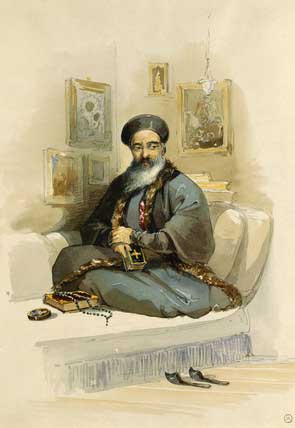 In the spirit of Thanksgiving, I went looking for the most extremely grateful character I could find in a fairy tale. Hands down, the prize went to the chief wazir in the Punjâbi story, The Thanksgiving of the Wazir from the Olive Fairy book.

Basically, the story goes like this: In Hindustan there were two rival kings whose countries bordered each other. One was a Hindu rajah, and the other was a Mohammedan bâdshah. The bâdshah’s chief wazir (or prime minister) was an old man with an unusual philosophy. He believed that since one can never know what good will come out of the bad things that happen, one should give thanks for everything.

One day, the king cut off the tip of his finger, and the wazir cried, “That’s good!”

Confused and not amused, the king threw the old wazir into prison.

Just as the king’s officers were dragging the old man through the prison door, the wazir muttered something under his beard.
“What did the rascal say?” the king asked the jailer.

“He said, ‘Thanks, your Majesty,’ said the man.

“He must be mad!” the king exclaimed. “Not only is he grateful for the misfortunes of others, he is grateful for his own! Surely something has turned his head….”

Later on, the court physician applied a cool, soothing ointment to the king’s finger, but his heart remained sore. He didn’t enjoy the hunting that afternoon, and wandered away into enemy territory. The rajah’s men seized him, bound him and took him to prison.

Now the incarcerated king couldn’t stop thinking about the old wazir. They were in the same predicament.

As it happened, the day was unlucky for the Hindu people, and so the rajah decided to sacrifice the king to appease the god Devi.  The king, however, had to be whole in order for the sacrifice to be whole, and the king had part of a finger missing. So the rajah spared his old rival’s life, and, in a show of generosity, sent the king packing with a large escort carrying many gifts.

As soon as the king returned, he ran to see the old wazir in prison. “Well, well, what do you think happened to me?” he asked heartily.

“How can a man in prison know what is happening outside?” asked the wazir.

The king told him everything, and when he was finished, he promised to pardon the wazir and set him free. But first he needed to know why the wazir had expressed gratitude when he cut off his finger.

The old man said, “Sire, am I not right in thinking that it was a very lucky thing that you cut off your finger? If you were whole, the rajah would have cut off your head!”

“True,” said the king, “But why did you give thanks when I put you in prison?”

“I gave thanks because it is always good to give thanks,” said the wazir. “If I hadn’t been in prison, I might have been with you, and the rajah would have sacrificed me. Of course, I would have given thanks for that, too!”

← A. Seeker's Storybook Say YES to the RE-Dress →