A Few Words with the Troll 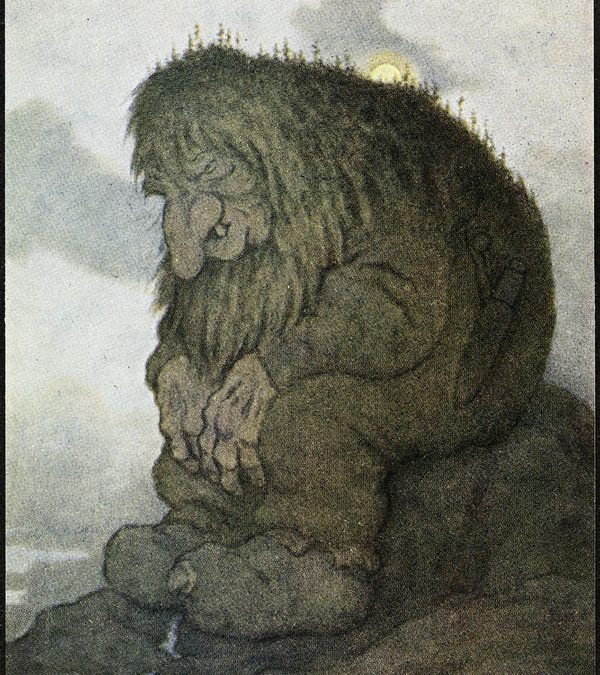 Last week, the Washington Post published a report detailing how officials at the Centers of Disease Control and Prevention had been banned from using words such as “diversity,” “fetus,” “evidence-based,” and “science-based.” The report caused an uproar, and while the CDC director is now saying that the words were not forbidden but discussed “in a routine meeting about how to present CDC’s budget (to Congress),” the avoidance of certain flagged words has sent a message to the scientific community about what research will and will not be approved by the powers that be.

hat can I say? It was time for literature.

A Few Words with the Troll

“Evidence?” sneered the troll. “Don’t talk to me about evidence!”

“Yes, but my research is science-based, sir,” she said.

She was trembling in her rain boots but she wasn’t about to leave the muddy ground upon which stood at the foot of the bridge. The troll had claimed it, and the town had no entitlement. No one was going to refute the troll. He was six-foot-six from the top of his warty head to the tip of his hairy feet, and what he said were the only facts worth knowing.

But she had a problem. The effluent of the troll was sweeping down the river and into the garden that fed her children. She and her transgender husband had four mouths to feed. Lately she had gone through two miscarriages. After she buried her second fetus, she began to do her research.

“Your waste, sir, is seeping into our groundwater. As I said, I have the—.”

The troll headed down to his house under the bridge, a foul place unfit for humans. Trolls are known to be disease-resistant. She’d also discovered that in her research. She had prepared a handkerchief soaked in lavender tea, and she took a good sniff, tucked the handkerchief into her skirt pocket and followed the troll down the muddy hill.

“Studies have been conducted all over the region that show that your effluent is killing species, sir. We are losing our diversity. I can give you a list of vulnerable plants, animals, and other organisms…. and another list of those that have already become extinct.”
The troll had come to his door, an arched door, made of oak and carved with ancient skill. “I simply do not understand what you are speaking about, madam,” he said. “Do not ask to come in for tea.”

“I would never be so presumptuous,” she said. “But you are an intelligent man. I’ve done some research on your own species, and… if you don’t mind me saying….”

“Go on.” The troll drew out a carved bone pipe from his waistcoat pocket and lit it with a snap of his clawed fingers.
“Well, I’ve discovered that trolls are generally more intelligent than humans, and by far surpass them in qualities of character, such as compassion and kindness. I must admit I was surprised….”

“Well, you shouldn’t have been,” said the troll, sucking on his pipe. His great mouth turned downward, his chin swelled into a pout, and his furry eyebrows hid the beads of his eyes.

“Of course sir, but, as you say, the research must be dismissed…”
“Why’s that?”

“Well, because the intelligence of trolls is a science-based fact. By your own judgement, it’s malarkey.”
“The facts stand before you, madam.”

The troll cleared his throat. He straightened himself up and blew puffs of sweet smoke into the air. He dressed like a Victorian gentleman, minus the boots and the hat. “Tell me what you need.”

“I thought perhaps, given that there are vulnerable people living downstream, mere humans, sir … that you might wish to consider some way of redirecting your sewage and waste, or perhaps even recycling it- … Perhaps you could, by your magic, sir, turn it into some sort of sustainable system so that we can all live together, with all our diversity…”

“Yes, well, I know that you’re not much of a reader, but we humans are forever recording things, and we make a big deal of our heroes in the history books. You are in the position, my very good sir, to become one of the greatest heroes in the country, if not in the whole world!”

The troll’s chest swelled and swelled until the buttons popped on his green vest. “It is not an easy thing for me to do what you ask, madam. Most trolls would not be capable of it. They have the skill, of course, but they lack the depths of my compassion….”
“Yes sir, that is precisely what I thought… though, begging your pardon, sir, my thoughts surely do not belong to me, but to some mist of the effluent that pours from your house.”

“It would be wiser of me not to waste any part of it.”