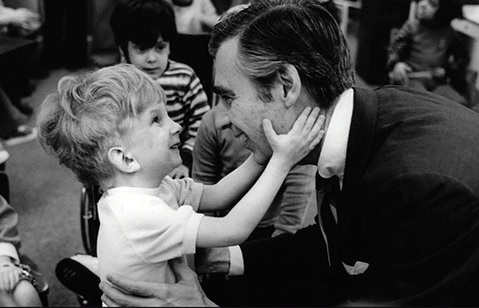 When I was pouring my coffee this morning, a few lines came to me.

God says
the reason I
ask you to kneel
is because
I’m down here.

Last night, Ian and I watched “Won’t You Be My Neighbor?” a documentary about Fred Rogers, the man who created “Mr. Rogers’ Neighborhood,” a children’s program that ran on television from 1968 to 2001. Whenever Fred Rogers spoke to a child, he got down on his knees or adjusted his posture so that he could converse at eye level. Mr. Rogers passionately believed that children need to know they are loved and lovable. His mantra, which he etched in the hearts and minds of his viewers, was “You’ve made this day a special day, just by being you. There is no person in the whole world like you, and I like you just the way you are.”

As a child, Fred was shy, introverted, and overweight. He was bullied by his schoolmates and spent a lot of time alone in his bedroom with his stuffed animals and his ventriloquist dummy. He wanted to become a minister but instead took a sharp turn into television. “I went into television because I hated it so,” he said in an interview with CNN. “I thought there was some way of using this fabulous instrument to be a nurture to those who would watch and listen.” He didn’t view television as an entertainment device, he saw it as an opportunity to help children make sense of a world that “is not a kind place.” He once said, “The space between the television set and that person who is watching is very holy ground.”

In interviews and in public forums, Fred Rogers spoke without any inhibition about the imperative of love. As I watched the documentary, I found myself sometimes squirming at his eccentric, ingenuous manner. We’ve all learned to meet overt expressions of love with cynicism and scorn. Yet he won the heart of all his listeners, whether it was David Letterman or the Chairman of the U.S. Senate Subcommittee on Communications. In 1969, when the Senate had proposed budget cuts to PBS, Fred Rogers appeared before the Senate Subcommittee to make a case for his show. He didn’t address budget issues, he went straight to what he offered and why.

“This is what I give. I give an expression of care every day to each child, to help him realize that he is unique … And I feel that if we in public television can only make it clear that feelings are mentionable and manageable, we will have done a great service for mental health. I think that it’s much more dramatic that two men could be working out their feelings of anger – much more dramatic than showing something of gunfire.”

He followed the speech with the lines of one of his songs that began, “What do you do with the mad that you feel?” At the end of the recitation, the chairman, John O. Pastore, declared: “I’m supposed to be a pretty tough guy, and this is the first time I’ve had goose bumps for the last two days. I think it’s wonderful. Looks like you just earned the $20 million.”

Fred Rogers understood that a successful society is not comprised of people who win over others. It’s made up of people who are winning all together. Nothing expresses that more clearly than the story he told the graduating students of Middlebury College in his commencement address in 2001. He had been to Seattle Special Olympics and had witnessed a 100-yeard dash.

“… there were nine contestants, all of them so-called physically or mentally disabled. All nine of them assembled at the starting line; and, at the sound of the gun they took off – but one little boy stumbled and fell and hurt his knee and began to cry. The other eight children heard the boy crying. They slowed down, turned around, saw the boy and ran back to him – every one of them ran back to him. One little girl with Down’s syndrome bent down and kissed the boy and said, “This will make it better.” The little boy got up, and he and the rest of the runners linked their arms together and joyfully walked to the finish line. They all finished the race at the same time. And when they did, everyone in the stadium stood up and clapped and whistled and cheered for a long, long time. People who were there are still telling the story with obvious delight. And you know why, because deep down we know that what matters in this life is much more than winning for ourselves. What really matters is helping others win, too, even if it means slowing down and changing our course now and then. 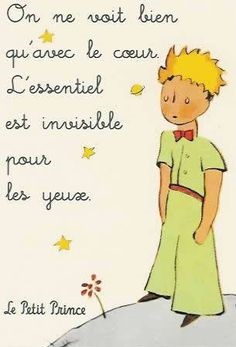 “Beside my chair in my office is a framed piece of calligraphy with a sentence from Saint Exupery’s book, “The Little Prince” (“Le Petit Prince”). It reads: “L’essentiel est invisible pour les yeux.” (What is essential is invisible to the eye.) I feel the closer we get to knowing and living the truth of that sentence, the closer we get to wisdom.”

The lines that came to me this morning felt like a genuflection. The last time I genuflected was at the top of a flight of concrete steps. My niece and I were exiting a restaurant when I stepped on a dolly that had been carelessly left there. Had I not dropped my left knee to the floor I might very well have broken my neck. Now once again I find myself genuflecting, this time to the lifesaving spirit of Mr. Rogers, who reminds me again where God is.

← Destiny's Song The Power of Song →